We have confirmed that Patricia McKeon, the wife of United States Congressman Buck McKeon has decided to seek election to the California State Assembly in the 38th  District, which is a “safe” Republican seat (41.4% R, 34.7% D – see the map here) Patricia McKeon will come out of the gate with two of the most prominent endorsements in the area for a GOPer — her husband, who is immensely popular in the area — and also longtime Los Angeles County Supervisor Mike Antonovich. 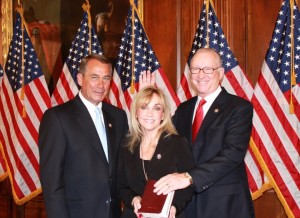 McKeon has retained well regarded GOP political consultant Joe Justin to handle her race.  No doubt she will also benefit from the fact that longtime time senior Republican strategist Bob Haueter is on the scene (Haueter serves as Deputy Chief of Staff to the Congressman).

While it is unusual to have the spouse of a Member of Congress run for (let alone serve) in the State Legislature, Patricia lives at home and no doubt already used to seeing Buck on weekends (or maybe even less, given his responsibilities as Chairman of the House Armed Services Committee).  Patricia is a strong social and fiscal conservative, which should play well in this Santa Clarita Valley based seat.

The only other potential candidate of which I am aware is longtime GOP activist and elected Trustee of the Santa Clarita Community College District, though he has made no formal announcement.  Unless Wilk jumps in, and quickly, it is possible that this might very quickly be game, set and match for Patricia McKeon.

One Response to “Breaking: Patricia McKeon To Run For State Assembly; Smyth Termed Out”