It will take a college degree to understand the Secretary of State’s voter information pamphlet for the November, 2012 election, given the partisan, pro-union move by the Legislature and the Governor to force measures off the ballot next June, and lump them all together in November.  But history demonstrates the crowded ballot really helps Republicans, whom demographics demonstrate are better educated and more prepared to comprehend the information and actually vote than voters registered in other parties in California. 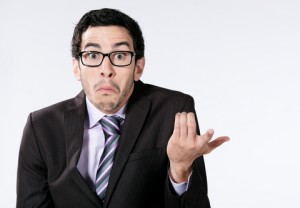 The Democrats changed the balloting on propositions because they were afraid an “anti-union” proposed proposition had a less likely chance of passing in November rather than June.

But average citizens in California will be overwhelmed with a likely 200 or more page guide to ballot propositions that will create so much eye strain that it will be more useless to them than a telephone book. Like the ubiquitous yellow page directories dropped off and quickly discarded at people’s homes and offices, the Secretary of State’s pamphlet will largely be sent right to the trash bin in most voting households. Because of jammed television and radio advertising for and against the much longer list of propositions to be considered next November, widespread voter fatigue will take hold and general voter turnout for the election will be somewhat depressed; and down ballot voting on propositions (voting other than on the presidential race) will see significant drop-off because of voter confusion about what the propositions stand for.  The winning and losing sides will be decided by how well the California Tea Party, Republican party and conservative activists motivate their core supporters, and how well the unions motivate their voters.  If Obama is way ahead in California on election day, informed conservative voters may get their way on most ballot propositions as moderate/liberal occasional voters drop out of voting because of the confusion and fatigue on propositions.  If the presidential election is (unlikely) competitive in California, conservatives might still get their way.  I believe the Democrats have outsmarted themselves on jamming all the state’s ballot propositions into just one election next November, and history supports that a long ballot favors Republicans and conservatives (see below).  But moreover, I believe they have done a disservice to the cause of useful, impartial voter information for average citizens, as well.

As required by state law under Elections Code Sections 9080-9096, before every election the California Secretary of State publishes and mails to all registered voters an “Official Voter Information Guide” which includes not only the list of statewide candidates and their ballot statements, and Supreme Court justices up for retention, but also titles and summaries by the Attorney General of all ballot propositions proposed on the ballot, impartial analyses of the law and potential costs to taxpayers prepared by the Legislative Analyst, two sets of arguments in favor of and against ballot measures prepared by proponents and opponents; and text of all the proposed laws.  The Secretary of State’s ballot pamphlet is intended to inform voters and serve as the definitive “official” voter information on all the propositions proposed on the ballot.  To be sure to inform all voters, the pamphlet is printed in English, Spanish, Japanese, Vietnamese, Tagalog, Chinese and Korean; and is available in regular print size and large print.  It can be ordered online in audio cassette.  The pamphlets are printed by the Office of State Printing and mailed using the county registrar of voter’s list of registered voters,  The State reimburses the counties for their costs in providing the data to the State. 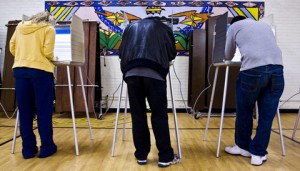 In the 2010 General election, the state ballot pamphlet contained a “Quick Reference Guide,” presumably because it was so big.  Besides information on all the statewide offices, it included information on political parties, the Voter Bill of Rights, and other preliminary information to voting that has been mandated for the pamphlet over the years.  On the ballot propositions, it included titles, summaries and analysis and arguments for and against 9 propositions, identified as 19 through 27.  It was 128 pages long in regular page format.

In the 2012 General election, there won’t be as many statewide candidates covered in the ballot pamphlet. But on average, each statewide candidate office only takes up two pages per office of the pamphlet.  On the other hand, the average ballot proposition takes up about six pages.   With surely double the total number of ballot propositions on the November 2012 ballot (45 proposed ballot measures are actively in circulation now according to the Attorney General’s website) from the 2010 ballot, it is very likely the Secretary of State’s pamphlet will exceed 200 pages.

The last time California experienced such a jammed statewide ballot proposition list was in November, 1990, when, even under the old rules of June and November balloting of propositions, there were 28 propositions on the ballot and the Secretary of State’s official voter guide was 224 pages long, broken down into a main mailing and a supplement, weighing about 3/4’s of a pound.  According to an article in the Los Angeles Times, though major newspapers write for citizens at the eighth-grade level, political scientist Philip Dubois at U.C. Davis said the ballot pamphlets are written at the “12th and 13th grade and above”, which is above the education level of the average California adult.  “I don’t see how anybody can get through it” said Bruce Cain, then associate director of the Institute for Governmental Studies at U.C. Berkeley.

For November 1990, the State published 9.5 million of the 224 page voter pamphlets at a reported cost of $11 million, not including postage.  I suspect the State will need to publish 16 million of the pamphlets in November 2012.  Assuming costs have doubled, the printing would be between $35 and $40 million.  Nonprofit postage on a 3/4 pound bound printed mailer is about $1.25 per piece or, roughly, an extra $20 million or so.  Then there is the cost of list acquisition to be reimbursed to the Secretary of State.  I think it is fair to estimate that the real costs of just printing and mailing a “monster” voter pamphlet for the November election will be upwards of $65 million.  This cost suffers from reverse economies of scale, because postage rates per piece (and perhaps printing costs) are reduced significantly for smaller electoral ballots.  Not to mention the most important result — a more comprehensible voter pamphlet and ballot for the average voter, which means more voter participation, not less.

So the November, 2012 Secretary of State ballot pamphlet will be largely useless in informing voters.  In fact, it will confuse them more.

The Democrats are now stuck with their useless ballot pamphlet.  Altering the information in the voter pamphlet requires changes in state election law, because of the myriad of mandated requirements that have been tacked on to the Elections Code over the years.  But while Democrats have “manipulated” the election dates themselves for ballot propositions, will they add insult to injury and “monkey” with the ballot pamphlet requirements to greatly streamline it?  If they do, they can be criticized as wanting to provide voters less detailed information than more; and trying to keep voters even less informed about what is on the ballot. Changing the ballot pamphlet law now is a “two-sided coin.”   Reducing voting opportunities on ballot initiatives and then eliminating information provided to voters for the resulting elections just doesn’t seem too democratic, does it?  More Uganda or Zimbabwe than California.  Thank you Darrell Steinberg, you get the Robert Mugabe Democracy Award from this blog column!

Bruce Cain is still at U.C. Berkeley in a more senior role and it would be interesting to see if any otherwise lazy main stream media reporters pick-up on the idea of calling him to see what he thinks about the Democrats change in rules to an overloaded November ballot in 2012 and if his observations about the problems with the November 1990 ballot still apply.  I suspect he will say that an overloaded ballot is still a bad thing that reduces public participation in an election.  He might add that the Democrats should have known that when they changed the rules.  I will add once again that I think the maneuver will backfire on them.

Internet communications will benefit voters with computers and other communications devices in November 2012 when considering the propositions.  While young voters possess many of these assets, they are the least motivated voters according to statistics.  Highly motivated conservatives and tea party activists represent a demographic that possess these devices and computer knowledge of them in greater numbers than other voting demographics in this state.  These voters don’t need the Secretary of State’s voter pamphlet, because they will get voting clues in other ways, such as from political organizations and affinity groups that have their own voter guides.  They won’t be confused by the length of the ballot, will be able to see through the advertising campaigns, and will surely be very informed about the ballot propositions and how to vote on them.  They will also be motivated to vote by strong opposition to Obama.  While Obama will likely win the election for President in California, a large swath of his voters that even do get to the polls can be expected to simply pass on voting on many of the other items that will be on the ballot, for reasons already stated here.

Oh, the results of that November 1990 election, the last time we had a really crowded proposition ballot? Pete Wilson beat Diane Feinstein for Governor; the people rebelled against the Legislature and passed the current terms limits law, Proposition 140, proposed by conservative Lew Uhler of the California based National Tax Limitation Committee, even though it was out-spent 31-1; 12 of 14 bond measures were defeated; three proposed increases in taxes were defeated; a “green” measure (Proposition 141) was defeated; a tax revenue shift from motor vehicles to rail transit was defeated; a measure to allow outside contracting for prisons was approved (Proposition 139); and the only measure that passed that might otherwise be considered remotely “liberal” of the rest of the 28 propositions on the ballot was a measure to add gill and trammel net fishing to the list of sports fishing activities requiring a license.  In other words, the election result was a conservative grass-roots blow out.