[Publisher’s Note – There are a lot of legislative scorecards out there.  Some are great on business issues.  Others are good on social issues.  Some are awesome on property rights.  Others still on gun ownership rights.  But hands-down the best legislative scorecard from the conservative side of the aisle, that rates the legislature from a broad perspective, is the annual scorecard of the California Republican Assembly.  The new CRA scorecard has been released.  Below is an introduction to it, followed by a link to see it online.  I was particularly pleased that CRA rated AB26x — which should have passed the legislature by unanimous vote, which would have abolished Californian’s Soviet-style redevelopment agencies.  How did your legislator score?  Read on…  – Jon Fleischman, FR Publisher and CRA Past President]

INTRODUCTION TO THE 2011 CRA LEGISLATIVE SCORECARD 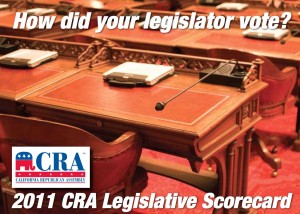 For the second consecutive year, the number of Legislators receiving perfect ratings on the California Republican Assembly’s annual Legislative Scorecard has declined.  Only two legislators received perfect 100% scores this year.  That’s down from five in 2010 and thirteen in 2009.

Overall fourteen legislators – twelve in the Assembly and two in the Senate – received “A” grades by scoring above 90%.

“We’d like to congratulate the members of the Legislature who received ‘A’ ratings,”  said CRA President Celeste Greig.  “They continue to demonstrate their commitment to Republican principles even when they have lost ground in the Legislature and been attacked like never before.  They should be thanked.”

CRA’s scorecard is derived from votes cast on diverse bills ranging from increasing the gas tax to requiring registration and tracking of rifles and shotguns.  A complete listing of bills is presented with the scorecard on the CRA website (link below).

CRA Parliamentarian Tom Hudson, who compiled the scorecard, noted that there were elements that made this year’s scorecard challenging.

“One of the bills in the Scorecard was especially problematic,” noted Hudson.  “AB 26x was designed to eliminate most redevelopment agencies, but it did not go far enough, and Republicans were largely left outside the bargaining room.  Despite its flaws, it was still the best opportunity to strike a blow against ‘crony capitalism’ and Soviet-style central planning in the last generation.”

The scorecard also focuses on other bills which may not seem important on the surface, but clearly demonstrate the divisions within the Democrat and Republican caucuses.

“It’s clear that Democrats are feeling pressure and are attempting to move to the middle,” added Greig.  “This may be Governor Brown’s influence, or simply a reaction to their extremely low approval ratings.”

“The difference this year between the highest scoring Democrats and the lowest ranking Republicans is much closer this year,” said Greig.

Once again, Assemblyman Nathan Fletcher had the lowest score of any Republican legislator, with a score of 56%.  Senators Sam Blakeslee, Anthony Cannella, and Bill Emmerson were tied for last place in the Senate, at 67%.

Without further introduction, you can download the fully formatted .pdf of the scorecard right here.  Past scorecards are available on the CRA website.