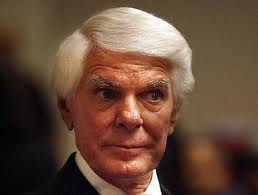 We have confirmed that longtime Republican Congressman Jerry Lewis of the Inland Empire has been making phone calls to supporters today indicating that he is not running for re-election.  We are not prepared to say this means he actually is retiring, since he has been rumored to be retiring before, and he keeps running again, and again.

Lewis of course is known as the “Minority Maker” as he was dubbed by the Wall Street Journal Editorial Board for being a prolific proponent of egregious pork-barrel spending in Washington, D.C.  The Journal credited Lewis with bearing some of the burden for the 2006 epic loss of the House by Republicans, because of GOP over-spending.

Lewis’ current seat was divvied up in redistricting and there were questions about which seat he would actually chose to run in.  If Lewis does retire, this could set the state for moderate San Bernardino County District Attorney Michael Ramos to run.  Ramos was a proponent of Governor Brown’s tax increase proposal last year, which was controversial in GOP circles.  Also possibly running could be State Senator Bob Dutton, and also there is rumor that if Lewis doesn’t run, Congressman Gary Miller might slide over and run for one of the two “Lewis” seats.   Also Supervisor Brad Mitzelfelt and Assemblyman Paul Cook… Lots of potential candidates in this area.

Again, we can confirm that Lewis is telling people he will retire this year.  We can only cross our fingers and hope it’s true.  Don’t miss this video below as a reminder of the big spending ways of the “Minority Maker”…