SD GOP’s Dilemma: How Do You Solve A Problem Like Maienschein?

Over the past week I have gotten a couple of phone calls and a few e-mails from elected members of the San Diego Republican Party Central Committee.  While none have been identical, the subject matter of the calls has been the same – the candidacy of former San Diego City Councilman Brian Maienschein for the State Assembly.   The context is this – Maienschein, a Republican, is running for what is, in essence, the Assembly seat currently held by Nathan Fletcher.  Tomorrow the San Diego GOP is considering potential party endorsements in many legislative races, including this seat, at a special meeting.  Maienschein has a Republican opponent, Dustin Steiner, who works for Supervisor Bill Horn.  Apparently Maienschien is a controversial candidate because, while on the San Diego City Council, he voted for a lot of the public employee pension boosts that have led that city to being ground-zero for pension reform. 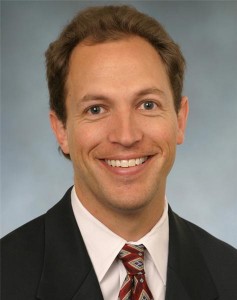 Brian Maienschien's past votes for generous public employee benefits are controversial within the GOP...

While I counseled those people who contacted me privately, I thought that I might address this issue publicly as well.  I don’t know Maienschien personally.  I have met him a few times over the years, and said hello to him at last weekend’s big Republican dinner at the Rancho Bernardino Inn.  He seems like a very nice, personable fellow.  That said, there is no doubt that he placed a complicit if not central role in burying San Diego in public pension liability hole so deep that even the pension reform ballot measure on the ballot in June, while a great step, does not adequately address.  My friend (and FlashReport blog contributor) Richard Rider, whom I hold in high regard, simply decimates Maienschein over on our local partner-blog, SD Rostra mainly over this pension issue.

I am told by some folks who know Maienschien that he is personally regretful, in hindsight, for his role in making San Diego into, what the (hardly conservative) New York Times called, “The Enron By The Sea.”

Not knowing Maienschien, nor having sat down with him personally, it’s hard to gauge the sincerity of his misgivings about past public policy decisions.  That having been said, I have always taken the position that the single best indicator of how someone will perform in elective office is his or her past performance (if they have served in public office before).  I should also pose the question (pardon this poor attempt at an analogy) but one also has to question the wisdom of putting even a recovering alcoholic into a seat at the bar.  The pressure from public employee unions on members of the state legislature is nothing short of staggering.

I suppose it is also appropriate to recall that in his previous race for City Attorney against Jan Goldsmith, San Diego GOP Chairman Tony Krvaric had to slap around Maienschien after he apparently put out campaign mail that implied a SD GOP endorsement that not only did he not have, but that had actually gone to Goldsmith.

Now, by all accounts, Maienschein is the prohibitive front-runner in the Assembly race, having amassed a big war chest and many endorsements.  And to his credit he has signed the ATR No New Taxes Pledge.  But supporting massive benefits increases for public employees would not have violated such a pledge.

Ultimately Maienschien will have to have a conversation with the voters about his qualifications, and they will decide whether to put him into the state legislature.  But the question right now is whether he should be endorsed by the San Diego GOP (and then potentially the California Republican Party) before the June election.

I can only say this.  If I were a member of the San Diego County GOP, I could not in good conscience in-essence reward the previous bad behavior of Maienschein with an endorsement from the party when there is still another Republican in the race, and there is zero chance that at least one of them will fail to make it to the November top-two runoff.  To depersonalize this just a tad, to give Maienschein a party endorsement this early would really send a message all around not only San Diego County, but around the state that the party is all talk when it comes to being tough on those who, for whatever reason, further the agenda of the public employee unions.

I guess I would close my expressing my admiration and appreciation for those on the San Diego County Central Committee.  No one pays you for your service, and in fact you all pay a price in terms of time spent on party matters that comes at the expense of time with family.  Good luck to you tomorrow as you weigh all of the decisions before you.

One Response to “SD GOP’s Dilemma: How Do You Solve A Problem Like Maienschein?”