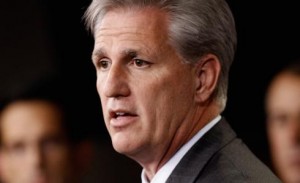 It probably is counter-intuitive to the casual observer that it is newsworthy that the House Republican Whip, Kevin McCarthy, has endorsed one of his colleagues for re-election.  After all, incumbent protection is a big part of the Beltway culture.  That having been said, when Gary Miller announced his candidacy for reelection in the 31st Congressional District, which is adjacent to the geographical turf he has represented in his current district, he rolled out some big endorsements like Speaker John Boehner and Rep. Pete Sessions, the Chairman of the National Republican Congressional Committee.  One name that was missing at the time was California’s highest-ranking Congressman, McCarthy.  Sources this morning have confirmed that McCarthy has now endorsed Miller’s candidacy over that of State Senator Bob Dutton, with whom Miller is competing for the GOP nod in what is a very competitive general election seat.

For some time rumors had swirled that the reason that McCarthy had not endorsed Miller because he was actually support, behind the scenes, the Dutton candidacy.  It’s fairly clear that McCarthy’s support for Miller puts that rumor to rest.   That having been said, the value-added to Miller of McCarthy’s endorsement is relatively minute — one more DC insider with no name-ID in the Inland Empire.  McCarthy is also divisive in California Republican politics, which further marginalizes the impact of his endorsements.  That having been said, the “big win” for Miller is that if he has McCarthy’s support, Dutton most certainly does not.