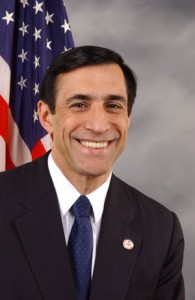 I just received this urgent memo from Congressman Darrell Issa.  He is very concerned that the SEIU is going to weigh into the race between three Republicans in the very GOP 67th Assembly District.  Issa’s District Director Phil Paule, a former FlashReport contributor, is a candidate in that race.  Read for yourself (see the original email here):

I am writing this quick note to bring you up to date on the campaign in AD 67 and to urgently request that your organization endorse Phil Paule.

It came to my attention that SEIU was conducting a poll in the district last night, and is likely to be coming in with an IE for one of Phil Paule’s opponents.

As you know, Phil Paule is my district director and I believe he will be an outstanding representative, someone you will enjoy working with on the most important issues facing California.

The race has not gotten much attention, but Phil’s background in the ground game of political campaigns is paying off. Phil’s team has walked over 10,000 homes.

I urge you to see fit to endorse Phil Paule. Your endorsement now, as absentee voting is about to start, will make the difference. I know you will not regret it.