For as long as there have been liberals seeking or occupying positions of authority in government, there has been the presence of the politics of class warfare. We will see this in aces in the campaigns of both Jerry Brown and Molly Munger for their respective income tax increase measures that come before voters in November — “the rich must pay their fair share” and “they can afford it” will be the rhetoric of proponents — never minding the unfortunate reality that state government revenues are already extremely overdependent on income taxes from California’s biggest earners. 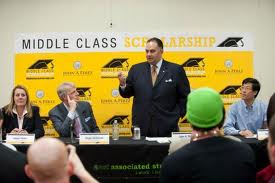 No where is there a better example of playing the “class warfare” card in the state legislature than Assembly Speaker John Perez’s so-called “Middle Class Scholarship Program” — which at its essence seeks to cut a favorable tax break for out-of-state companies, that saves those companies about a billion dollars a year in state taxes, and then proposes to use that billion dollars to instead create a new program to directly subsidize the costs for students to attend a public college or university in the state. Well, not all students, actually. And not just students that Perez thinks are middle class either. Perez’s plan would call for massive subsidies for students who have (or live with parents who have) a household income of $150,000 a year less (with some subsidies going to those with a household income of up to $160,000). Thus, unsurprisingly, we have another wealth redistribution scheme by the majority party, that would be used to try and put a wedge between those making less money, and those making more. Pretty much everyone sees this play for Perez for what it is — an election year play to try and embarrass Republican legislators. Which is why I was a bit confounded to see four Republican Assemblymembers — Katcho Achadjian, Jeff Gorell, Kristen Olsen, and Cameron Smyth, go up on a key element of Perez’s proposal (which is split into two bills, A.B. 1500 and A.B. 1501). Their votes along with the votes of every single Democrat in the Assembly saw A.B. 1501 pass easily.

To put the political play of John Perez in context, one must necessarily take a brief but important look at the circumstances whereby state law was amended to grant businesses headquartered outside of the state a more favorite formula for computing their taxes due do to the State of California. Perhaps I can lift a brief description of this tax advantage that was written by the Legislative Analyst’s office in 2010: “The February 2009 state budget agreement changed the apportionment formula used to determine California taxable income for firms that also operate in other states. While the current formula considers the location of firms’ sales, property, and payroll, starting in 2011 firms will have the option to consider only their sales.” — Of course it now is 2012, and these out of state firms have now already enjoyed this more favorite tax formula since last year.

It is important to understand that the 2009 budget deal to which the LAO refers in the citation above was a dark day for California taxpayers. That “deal” included what remains to this day the single largest tax increase in the history of California. Sales taxes, income taxes, and car taxes all went up, and the child tax credit was reduced — leading to an estimated $14 billion in higher taxes each year for two years. In what can only be characterized as a “robbing Peter to pay Paul” situation, simultaneous to all Californians getting hit with broad-based tax increases, a relatively small number of large businesses were afforded the favorable tax treatment I mentioned above. It should come as no surprise that the “big business” community came out strongly in support of the budget deal that year, though not until they successfully secured this “elective single sales factor” tax break, which is estimated to save the effected companies somewhere around a billion dollars a year.

Last year, there was an effort by some, led by Assemblyman Nathan Fletcher, to repeal this deal for out of state corporations and shift the “savings” (the increased revenues to the state from ending the break) — some of it to certain residents, some of it to give as credits to certain industries. When the concept of ending the elective sales factor break was first presented to me, I made it clear that if we could end it, and make that revenue neutral to the state by lowering tax rates for all Californians (perhaps the sales tax) by an appropriate amount, I would be all for that. But alas by the time the Governor and Democrats were done, it was no longer a bill that could enjoy any substantive GOP support.

Since that failed effort to unravel the elective single sales factor last year, there has been a great deal of salivating by the left over the idea of actually making that happen. The LAO has made it clear that such an action would require a two-thirds vote of the legislature, leaving the Democrats tantalizingly just-shy of the votes needed to make the change on their own.

Which brings us back to the political play of Speaker John Perez with AB 1500 and 1501, the former of which ends the elective single sales factor tax break and the latter of which then allocates the “savings” to the subsidies for students in public colleges and universities. The bills are tied together — in order for either to go into law they must both pass and become law.

There is no doubt that Speaker Perez will publicly leverage the votes of the four GOP lawmakers who supported the spending side of his program making it clear that his plan enjoys bipartisan support. Unfortunately, putting aside for a moment the entire question of how you would pay for it, it is important to note that the public policy contained within AB 1501 is a bad idea as it once again represents the idea of taking from some Californians to give to others. If there just happened to be an “extra” billion dollars in tax funds just sitting around, using them to provide subsidies to certain students in college in California is totally unfair to those students who do not benefit from the program. If you were going to put a billion dollars into the higher education system, in principle it should go to the overall costs of the various systems and bring down the costs equally for all, or raise the quality of education. It is significant to note that there is no “public contract” guaranteeing a free or subsidized, public higher education.

But the real issue, which is worthy of more discussion here, are the poor politics of Republican legislators throwing in with Perez’s plans. In casting their votes for the bill, Achadjian, Gorell, Olsen, and Smyth play right into the hands of the Democrats. First and foremost they divide the GOP caucus in a year when being unified is more important than ever. And as I said above, they provide a patina of bi-partisanship for Perez’s political move — and that is exactly what this is, an effort to put a black mark on Republicans in an election year, portraying them to be more interested in out-of-state corporations than the plight of middle-class families, struggling to pay for the college educations of they children.

The day after they cast their ill-advised votes, these four GOP legislators issued a public statement making it clear that while they supported Perez’s plans for spending a billion dollars, they did not support his proposal on eliminating the elective single sales factor as a way to generate the funds to pay for it. Reading it at the time, I just scratched my head. Who votes for a billion dollars in spending without clearly identifying where you would get the funds to do so?

In their statement, the four Republicans said (to Speaker Perez), “We want to work with you to find an alternative funding source for the middle class scholarship program. This relief should be funded with state savings from bureaucracy reductions and pension reform, not a tax increase. We urge you to support Governor Brown’s pension reform proposal and move the bills introduced by Republicans out of conference committee and to the floor for a vote.”

Huh? I thought the whole idea of pension reform was to be able to lower the costs and actually make a dent in the state’s massive portfolio of unfunded public employee pension obligations?

The very next day, California Employers Against Higher Taxes (this is a group formed, no doubt by the effected companies, to fend off efforts to end the elective single sales factor tax break) felt the need to deal with these awkward GOP votes on Perez’s spending plan by putting out a release of their own, stating in part, “Assembly Republican Leader Connie Conway, Members Jeff Gorell, Kristen Olsen Cameron Smyth and Katcho Achadjian, and their Republican colleagues recognize that every job matters and have demonstrated strong leadership by opposing the $1 billion tax increase in AB 1500.”

I found the whole thing to be rather sophomoric, and knowing all four of these legislators, I think they are all capable of thinking more strategically than they did the day that cast their votes for AB 1501.

Everyone “gets it” that the recession has created a tough financial picture for California state government. And Republican legislators should have an even higher level of anxiety with front row seats to see their Democrat colleagues literally throwing gas onto the fire with their efforts to raise taxes when we need tax relief, and to increase regulations when we should be eliminating many of them. So I am sure that all four of these Republican legislators had the best of intentions in trying to send a message to people in tough economic times that they want to help them. But breaking off from an otherwise-unified caucus in the face of such a nakedly aggressive political maneuver by the Speaker was not a prudent decision. It demonstrated a lack of cohesiveness that minority Republicans can ill afford.

It was Benjamin Franklin who said, “We must all hang together, or assuredly we shall all hang separately.”