100 years of Capitalism and Freedom

I am honored to be a new contributor to the FR blog. My CalWatchdog new stories and columns appear in the FlashReport, and now I will be a blogger as well. Sometimes I will cross post with CalWatchdog, and sometimes the posts will be exclusive to the FR blog – Katy Grimes, 7/31/2012 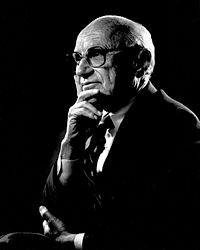 Friedman, born July 31, 1912, and died November 16, 2006, easily dispelled the common liberal notion that capitalists are greedy, and demonstrated to Donahue how manipulated America has become by anti-free market government forces.

Donahue asked Friedman if the maldistribution of wealth, the haves and have nots, and greed, a good idea to run countries on?

Friedman asked Donahue if he thought Russia, China or the rest of the world doesn’t run on greed?

“The masses are worst off in the kinds of societies that depart from capitalism, and free enterprise,” Friedman said.

“But it seems to reward not virtue as much as it does the ability to manipulate the system,” said Donahue.

This short video clip is as important today as it was in 1979. Enjoy Milton Friedman – Greed.

A few more of my favorite Friedman quotes:

* ”Nothing is so permanent as a temporary government program.”

* “Underlying most arguments against the free market is a lack of belief in freedom itself.”

* “I am in favor of cutting taxes under any circumstances and for any excuse, for any reason, whenever it’s possible.”

* The economic miracle that has been the United States was not produced by socialized enterprises, by government-union-industry cartels or by centralized economic planning. It was produced by private enterprises in a profit-and-loss system. And losses were at least as important in weeding out failures as profits in fostering successes. Let government succor failures, and we shall be headed for stagnation and decline.

* “There is all the difference in the world, however, between two kinds of assistance through government that seem superficially similar: first, 90 percent of us agreeing to impose taxes on ourselves in order to help the bottom 10 percent, and second, 80 percent voting to impose taxes on the top 10 percent to help the bottom 10 percent — William Graham Sumner’s famous example of B and C decided what D shall do for A. The first may be wise or unwise, an effective or ineffective way to help the disadvantaged — but it is consistent with belief in both equality of opportunity and liberty. The second seeks equality of outcome and is entirely antithetical to liberty.”

* “If you put the federal government in charge of the Sahara Desert, in five years there’d be a shortage of sand.”