Los Angeles Mayor Antonio Villaraigosa probably thought today would be another easy day in the limelight in Charlotte with lots of great national exposure wielding the gavel at the Democratic National Convention.

Yet, as this video shows, the Mayor is flummoxed when he’s forced to call for a vote three separate times on whether to amend the Democrats’ national platform to add recognition of Jerusalem and God back into the party’s platform.

One would think that adding back in language concerning Jerusalem, which has been in the platform almost continually since 1972, and a reference to God, which has always been in the party’s platform, would be a no-brainer for the Democrats.  Yet, it’s clear that most of the delegates from the party of “tolerance” and “diversity” would have none of it.

Watch and listen to the video: do you think two-thirds of the delegates voted for the amendment?

Republicans successfully pounded the Democrats for days over the party’s decision to remove multiple pro-Israel planks from their platform, together with any reference to God.  Today the party leadership and the White House determined a reversal was required,  the delegates had a different idea.  Take a look: 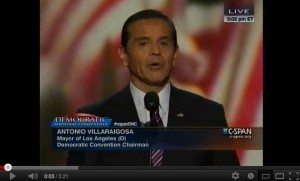