Asm. Kristin Olsen Rejects The Pledge She Broke, The Pledge That Helped Her Into Office

Yesterday, in a column published in the Sacramento Bee, Republican Assemblywoman Kristin Olsen announced, two weeks before the general election, that she was no longer willing to stand by the written pledge that she made in her first election to the Assembly, to the constituents of her district, “to oppose and vote against any and all efforts to raise taxes.”  She specifically said that she would not renew her pledge as she seeks re-election to her newly drawn district. 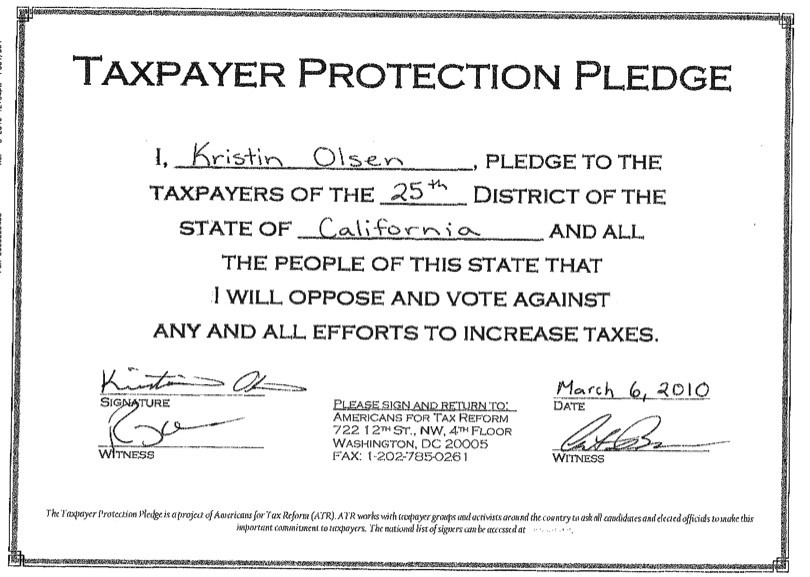 Candidate Olsen's voluntary pledge to the taxpayers in her district...

In her missive, Assemblywoman Olsen panned the pledge she made to her constituents, saying that, “entrenched special interests interpret what is or is not a violation of the pledge to serve their own agendas — and sometimes their interpretations defy logic.”

Not mentioned in her column is who exactly are these self-serving “entrenched special interests” — with interpretations that, “defy logic.”

No doubt Assemblywoman Olsen’s decision to pen her editorial comes as a product of her own decision, in the final hours of this year’s legislative session, to violate the no new tax pledge that she has made in her 2010 campaign for office. You see, while the legislation ultimately fell two votes short in the State Senate, Olsen cast a controversial vote to extend hundreds of millions of dollars in annual car taxes, set to expire in 2015 (they were originally billed as “temporary” when they were first enacted) and renew them all the way until 2023, at a collective cost to car owners in California of well over two-billion dollars.

This legislation, SB 1455, did not include this massive tax increase in it as it moved through the legislative process all year. The tax increase was actually amended into the bill about a week prior to the end of session. The most vocal opponent of SB 1455 was the Howard Jarvis Taxpayers Association. In a September 24th column, HJTA President Jon Coupal described the bill thusly, “…SB 1455, a seemingly sensible proposal to ease regulations on diesel truckers as well as establish hydrogen fuel stations to support cars that will – it is hoped – increase in popularity. But the proposal came with a heavy price tax: $2 billion in higher car taxes, including vehicle registration fees, smog abatement fees, and tire surcharges. It was a classic example of how the Legislature works to build support for extracting more from taxpayers. By first placing overly restrictive regulations on industries like diesel truckers, they can then persuade those impacted to support new taxes by offering, in return, to reduce their regulatory burden.”

The night that Assembywoman Olsen voted for this massive tax increase (the last night of session, of course, when many bad things happen), she and I disagreed about whether extending existing taxes is, in fact, a tax increase. Perhaps it is me to whom she is referring when she mentions interpretations that defy logic (and perhaps the HJTA is the “entrenched special interest”?). But it seems pretty straightforward that if there is a tax on the books that is set to end — to “sunset” as they call it in the legislature — and there is legislation to renew this tax for a longer period of time — of course that is a new tax. And the bill was scored as requiring a two-thirds vote, because under Proposition 26, all bills that “increase revenue” require a supermajority vote.

By the way, no one is saying that it was an easy vote to take. Many, many California business owners, large and small, are being hit hard by onerous regulations being heaped on them by an out-of-control liberal majority in the legislature. But raising taxes on a broad-based group of taxpayers (or in this case, car owners) to then redistribute some of that money to mitigate the negative impacts of those regulations is morally questionable, and a recipe for justifying an endless number of tax increases in an effort to mitigate the negative impacts on an endless number of onerous regulations.

It is worthy of note, by the way, the Olsen was not alone in violating her pledge not to raise taxes in voting for SB 1455 — other GOPers doing so included Senators Bill Emmerson and Jean Fuller, and Assemblymembers Katcho Achadjian and Cameron Smyth. The only reason the bill didn’t pass was that two Democrat Senators, Lou Correa and Rod Wright, didn’t vote for it. 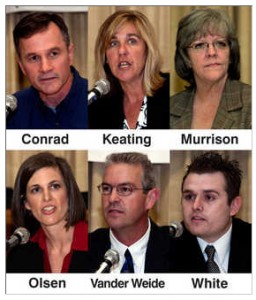 Let me conclude this critique of Assemblywoman Olsen’s sudden announcement by reminding those reading it that when Olsen was first running for the Assembly in 2010, amidst a crowded field of competitive candidates, she found it advantageous to sign a written pledge to oppose new taxes and oppose efforts to raise taxes. While Olsen ran a strong campaign, and many factors led to her winning the Republican nomination to a safe GOP Assembly seat, there is no doubt that signing the pledge was a factor in her victory. Republican primary voters, by and large, frown on candidates who equivocate on the issue of taxes, given how Californians are amongst the highest taxed in the nation. Now, two years later — not well in advance of filing for office, when other Republicans might jump into her race, but only two weeks before she faces her nominal opponent in yet another safe GOP seat, Olsen announces she is releasing herself from her self-created burden. And as I said above, she of course made no mention of the fact that she actually didn’t make it through her first term without breaking her promise to oppose new taxes anyhow.

Much is made of the need to elect Republicans to make sure that Democrats cannot get the super-majority of votes needed to raise taxes. In fact, it is a staple in the fundraising pitches made by legislative leaders to raise the substantial amount of funds it takes to win expensive legislative races. That pitch rings hallow when elected Republican are willing to vote for higher taxes. Assemblywoman Olsen strikes a clarion call for “pragmatic conservatism” in her Bee column. In case you don’t have a dictionary handy, the synonym for pragmatic conservative, is a Republican who is willing to raise your taxes.