November 6: A Devastating Election For Republicans

November 6, 2012 will long be remembered by Republicans nationally as, well, a really bad election day. Governor Mitt Romney’s loss to Barack Obama, when the President was forced to run for re-election on the economy, in a bad economy, smarts. Losing a significant number of U.S. Senate races where polls and pundits had put the GOP in the hunt just added to the misery. Republicans did hold on the House of Representatives, which is very significant, of course. But because this was expected, it did little to ease the disappointment of this Republican. 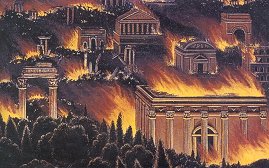 Here in California, the shellacking was pretty thorough. After rejecting the last eight tax increases in a row to appear on the statewide ballot, voters approved Governor Brown’s massive income and sales tax hikes to the tune of $7 billion a year, as well as a separate measure to hike taxes on multi-state businesses by another billion dollars annually. Proposition 32, which would have reduced the power of the state’s public employee unions (which pretty much control the levers of power in Sacramento today), failed under a massive onslaught of union political spending.

Our state’s Congressional delegation has now shifted considerably more to the Democrats. Incumbent Mary Bono Mack was ousted, and two others, Dan Lungren and Brian Bilbray, are likely to lose. A whole list of “in play” contenders like Tony Strickland, Ricky Gill, Abel Maldonado, John Tavaglione, and Gary DeLong – all lost.

Of the four State Senate seats that were in contention, Democrats needed to win two in order to secure a super-majority – they won three. As I write this, Bill Berryhill looks to have won, but Jeff Miller, Todd Zink and George Plescia all lost. While it was said that Assembly Republicans could pick up a couple of seats, the exact opposite occurred – some surprise defeats for Assemblyman Chris Norby and Central Valley candidate Pedro Rios, Democrats now have a super-majority in the lower chamber as well. (As a cautionary note, Republicans could have easily lost three more seats but for the fact that the Democrats didn’t press their advantage to the max.)

To top it off, the eyes of the nation were on the Mayor’s race in San Diego – a nail biter between Democratic Congressman Bob Filner and Republican Councilman Carl DeMaio. DeMaio narrowly lost and the GOP lost a key council race as well.

The blue tide across California was indiscriminate in washing out conservative Republicans, and moderate ones as well.

As should be the case when you lose, Republican now have to tough challenge of assessing and analyzing all of the battles lost, to try and determine the best strategy going forward in increase market share, and produce electoral victories at the national and state levels. We will no doubt feature some commentaries here on this site on this very subject, with a California focus. And of course we will link relevant commentaries that run elsewhere on the web.

I will throw out four key factors that I believe led to the particularly bad day that the GOP had in California.

Obama’s Wave. While the final numbers aren’t yet certain, as of now President Obama carried California by a staggering 20.5% margin. This certainly creates a tough hurdle for fellow GOP candidates down-ticket.

Funding Superiority. Even with the diversion of tens of millions of dollars to Yes on 30 and No on 32, the amount of funding that Senate and Assembly Democrats had to spent on races was vast – ultimately Republicans may have been outspent 5 to 1 or more. This matters in California’s large districts where it costs consider amounts of money to communicate your message.

Proposition 14. While delivering very little in the way of delivering moderate winners, this measure has proven instead to be very costly, embroiling resources on both sides of the aisle in intra-party run-offs. Because Republicans have so much less money to spend, they are
disproportionately disadvantaged by this faux-reform.

Redistricting Reform. Republicans leapt at the idea of a ballot measure that would once and for all general “fair” lines for the Board of Equalization, Congress, the State Senate and the State Assembly. But as we have seen in the practical application, you cannot take politics out of what is an inherently political process. The left was able to co-opt the process and the resulting new lines are disadvantageous to Republicans (not that the GOP wouldn’t fare poorly, given the Democratic voter registration advantage, but this “reform” made it worse).

No doubt that we will see a deluge of punditry about how Republicans lost so many seats this year because of ideological rigidity – because the party is too far to the right or some other such bunk. It takes about a nano-second to review where Republicans lost to see that even those Republicans running as moderates fared poorly. A whole group of candidates ran as high-profile non-signers of the ATR No Tax Pledge – virtually all of them lost.

It’s worth noting, as an aside, that 2012 was the “Year of Charles Munger, Jr.” for the California GOP. The reforms he championed were front and center. He pushed out millions of dollars to fund candidates who fit his narrow agenda, and went “all in” as it were. As we have discussed, this has all made things worse, not better — so hopefully we try a new approach for 2014.

There is no doubt that Republicans have a challenge with messaging here in California. Without the bully pulpit of a Governor (harkening back to the days of Deukemejian and Wilson as Schwarzenegger was a net negative to the GOP in this regard), nor a President, it’s hard to get our party’s message out to the electorate.

With the election over, the first time and place for GOP introspection will be right now. GOP legislators have all gone back up to Sacramento for a post-mortem and get-together. Senate GOP Leader Bob Huff and Assembly Republican Leader Connie Conway will no doubt have their hands full explaining how the block on the super-majority in each of their houses were lost. Back in the day, if you lost seats as a leader, you simply stepped down and let a new team in to gear up for the next elections. It is unclear if that happens this go around, but one thing is for certain…. As bad as 2012 was for the GOP in California, 2014 could still get worse, but it would be hard to imagine. But it could also get much, much better. What is it they say about being at the bottom? It can only get better. Amen to that.