Just the Facts, Ma’am – Fiscal Cliff Edition: This was the famous, at least to those of us who were alive then, admonition offered by the fictional LA detective, Sergeant Joe Friday, to witnesses who would engage in too much speculation about a crime. Well, I generally give you a lot of my opinion. Every once in a while, though, I give you just the unvarnished facts so that you can draw your own conclusions.

You have probably heard the term “Fiscal Cliff” enough times to make you sick. But, do you really know everything it entails? Below, you will find a comprehensive list of every law that will expire at the end of this year, as well as the result of our returning to whatever the law was before. The accumulation of all of these things has been dubbed collectively by the media as the “Fiscal Cliff”:

• Unemployment compensation will revert from a 73 week maximum to a 26 week maximum. This takes it back to the duration that existed in 2008 and prior. This will reduce spending by approximately $30 billion over 10 years.

• For the last 2 years, estates have been exempt from death taxes if they were below $5 million, while higher amounts have been subject to a 35% tax. These death taxes would revert to 55% on any estate over $1 million, not indexed for inflation in the future. This is the rate that existed in 2000 and prior. However, the rate has been lower and the exemption higher every year since. This is projected to raise $300 billion over 10 years.

• The “Sequestration” is complicated. But in short, it requires about $500 billion in defense spending cuts over the next 10 years. About $320 billion will be cut across the board from other non-entitlement (discretionary) federal spending that is not defense-related. And, there is about a $180 billion cut to Medicare payments to doctors and hospitals that provide Medicare services. This is about a 9% cut in the “discretionary” spending and about a 2% cut in Medicare. Total savings, including interest on the debt not borrowed, is $1.2 trillion over 10 years.

• The changes in the tax rate tables are also complicated. But, here is a table of the old and new tax rates on ordinary income. This table displays the results of reverting to the rates that existed prior to 2001: 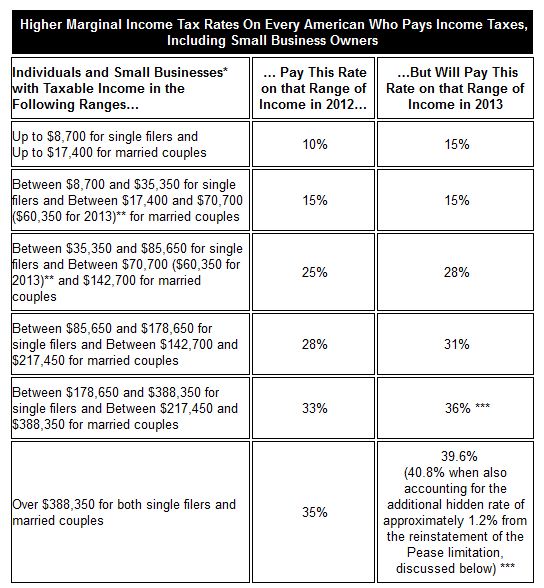 • In addition to the ordinary rates, capital gains taxes will increase from 15% to 20%. Dividend income will be taxed as ordinary income and will no longer have a special preference. The “phase out” of itemized deductions and exemptions will start at lower incomes than today, so the “value” of deductions and exemptions will be reduced. Standard deductions will also be reduced. The child tax credit will drop from $1000 to $500, and it will no longer be refundable.

• The AMT (Alternative Minimum Tax) patch expires retroactive to 2012. The current patch has been in place since 2001. Again, this is a complicated thing, but suffice it to say that its expiration will further raise taxes on about 20 million taxpayers, primarily in states with high state income tax rates. The result of the AMT expiration will be $864 billion over 10 years.

• The “farm bill” will expire. The farm bill details how farm payments, price supports and food stamps are administered. Its expiration means that the law reverts back to the 1949 code. This has a number of consequences that will likely increase spending. An example is that milk price supports will be triggered, requiring the government to buy enough milk and cheese to raise the price of both by about 70%.

• The “doc fix” will expire. In 2013, the “doc fix” would prevent a 25.6% cut to Medicare doctors who treat Medicare patients. If this expires in combination with the Sequester, reimbursements to medical providers will drop significantly, causing many of them to refuse to treat Medicare patients. And, under current law, the patient is prohibited from making up the difference. This is projected to save approximately $245 billion over 10 years.

The total impact of all the income tax rate changes is estimated to raise revenue of $4.5 trillion over 10 years. The total effect of all of this would be to reduce the deficit by approximately $7.7 trillion over the next 10 years. If that were to occur, that equates to about 35% of the projected deficit over that period. But, these projections are done in what is known as “static modeling”. That means that no adjustments are made for the economic impacts or behavior changes resulting from any of these changes. When tax rates go up, people do not sit still. They take actions to legally reduce their tax bills. Without a doubt, that will happen here and the revenue increases will not occur as projected. Furthermore, if the economy falls into recession, as many predict, incomes and revenues will drop further.

Boy, it’s hard for me not to add any opinion. But, there you go. Just the facts.