Jim Brulte For Chairman Of The California Republican Party


While he has not made a formal announcement of his candidacy, it has certainly been much talked about that Jim Brulte, the former leader of both Senate and Assembly Republicans, is seeking the Chairmanship of the California Republican Party.  This is great news for the party, and for conservatives in California.  I am very excited to endorse his candidacy, and will work hard not only to see that he is elected, but look forward to doing what I can to help make sure that under his leadership the CRP is successful. 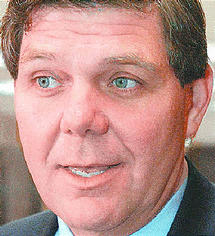 Let me start out from the outset by making it very clear — Jim Brulte is a solid conservative.  Whether you look at issues of taxation and regulation, freedom and liberty, the sanctity of human life, or the importance of the traditional family, Jim is a stalwart Republican.  He firmly opposed Prop. 14 and believes in a strong, vibrant political party system.  But you don’t have to take my word for it — he’s got a voting record well over a decade long to attest to his conservative credentials.  When you talk with Jim, you will find that he does not believe that Republicans are losing market-share in California because of these policy positions, but rather how we communicate our positions, and of course how we engage in the science of politics.

In talking to many people about Brulte these last couple of months, I have had many tell me that they had heard that Brulte was a “moderate” — that his candidacy for party office would be about moving the party to the left.  Hardly.  As I explain to people, to know Jim Brulte is to know that it is, by and large, his temperament that is moderate.  Jim typically does not get in people’s faces, and tends to be congenial and warm in his interactions with everyone with whom he deals.  Jim is a listener, and is very considered about his decision-making.  Now don’t get me wrong — Jim can be assertive when he needs to be.  But it’s not because he’s flying off the handle, but rather it’s because he’s made a calculation that being more strident or direct in certain circumstances is what is needed or warranted.  Perhaps my favorite example would be in in June of 2003, when as the Senate Republican Leader, he actually threatened to fund political mail against any member of his own caucus who went up on a tax increase.  It was a bold move — probably meant to send a signal to then-Governor Davis and the Democrat legislative leadership as anything else. 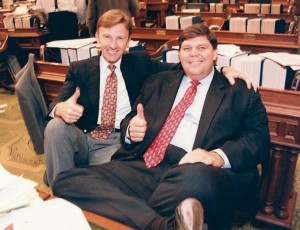 Then Assemblymembers Jim Rogan and Jim Brulte in 1996

Over the years I have dealt with Jim in a number of capacities.  When he and I first met in 1989, he was doing advance work for a Vice Presidential trip to California, and I was a 22-year-old volunteer motorcade driver.  But as time went on, Jim would get elected first to the State Assembly (where he would become leader, and preside over the political operation that ultimately elected a Republican Speaker) and then the State Senate where he also became the leader.  I dealt with Jim when I was State Chairman of California Young Americans for Freedom, then years later when I was State President of the California Republican Assembly.  But I probably worked most closely with him during my two-year tenure as Executive Director of the CRP from 1999-2001 under then-Chairman John McGraw, when Jim served in two roles — Senate Republican Leader (for part of that time) and as a leader for Bush-Cheney.  Of course we have stayed in touch since Jim’s departure from the legislature a number of years ago.

What did I learn about Jim Brulte working with him over the years?  As I have said, Jim is a conservative.  Jim is also an honorable man.  In a business where the handshake no longer means much, it still means everything to Jim.  Jim is a smart guy — who has an innate acumen for the technical side of politics — he understands how to win elections.   Jim is a bridge builder.  Jim understands that in order to be successful, you must be able to build coalitions, and practice addition rather than subtraction.  Jim is respectful and appreciative of grassroots volunteers, an important point as he seeks election to position typically held by a grassroots activist.  I guess I would also add as an observation that Jim is a patient guy.  In football parlance, I always want to pass the ball to the end zone to try and score a touchdown – every time.  Jim on the other hand understands that to win, you also need a running game — that wins can be incremental, gaining a few yards at a time.

There is no doubt that the Republican Party in California is in a very tough situation.  Like the Republican Party on the national level has become a regional party, competing in only some of the 50 states — the GOP here in California is also a regional party, only able to compete in parts of it.  There are many reasons for why Republicans have and continue to fare poorly here, which could be the subject of an entire series of columns.  Democrats enjoy a tremendous, ongoing fountain of almost infinite campaign funds, largely as a result of the always-full coffers of the state’s massive public employee unions.  Demographic trends are working against the GOP as well as the numbers of taxpayers shrink, and those receiving government welfare continue to swell in ranks.  There is no doubt that the Republican Party has a huge challenge dealing with California’s growing ethnic communities.  And of course Governor Arnold Schwarzenegger spent seven years almost single-handedly eviscerating the Republican Party’s brand name, with his herculean efforts to raise taxes, vastly increase regulation, and grow the size and scope of state government.

There has been dysfunction at the California Republican Party for many years now.  It has taken many forms to be sure.  In some cases, Chairmen were elected who simply did not have the interests of the CRP at heart in the way that they carried out their jobs.  In other cases you had schisms between some of the leaders in the donor community and the grassroots leaders who have occupied the leadership positions in the CRP most of the last dozen years.  Despite these “challenges” — I should point out that with the exception of the last election cycle, vast sums of money have still flowed through the CRP for the purposes of trying to win elections.  But while the CRP as an institution is permanent, there has been no success in creating a permanent campaign from the CRP, that is looking out beyond the next election cycle.  That said, if all was rosy and well-oiled at the CRP, and everything had been done as well as could be, Republicans would still be in a big hole here in California.

The good news is that electing a strong, capable Chairman will certainly help that CRP to make gains and move the ball down the field in the right direction.  The bad news is that there are much bigger issues for Republicans here than will be resolved by who the volunteer leader of the party apparatus happens to be.

While the primary purpose of this column is to express my support for the candidacy of Jim Brulte for CRP Chairman, and why his running is a good thing for California conservatives, I do want to devote a little bit of time to talk about current CRP Vice Chairman Steve Baric.  Steve has been my close friend for many years.  He is literally my neighbor.  Our children play together.  When Steve ran for Vice Chairman just two years ago, he did so with the idea that someday he would seek the office of CRP Chairman himself.  But for a number of reasons, Steve decided that now was not that time — in fact he is a strong supporter of Brulte’s candidacy as well.  It was anticipated when the current Chairman ran, that he would serve two terms, as his two predecessors had done before him.  Had this been the case, maybe Steve would have been ready to take on the top job.  But running now would have been problematic for him.  Besides having a young family, he also has a relatively new private law practice that is just now coming of its own in a major way.  And Steve also serves on our local city council, and 2014 is an election year for him personally.  On top of this, Steve feels that the life-experience, qualities, and relationships that Jim Brulte would bring to the CRP are what is needed right now.  I should also mention that there was never any possibility of Steve and Jim both vying for the office, as Jim made it clear that if Steve wanted to run, that he would support him.

It is likely that Jim “clears the field” in his run for CRP Chairman, given his conservative credentials as well as his track record as a smart politico with a knack for winning elections.  So the challenge for Brulte will begin in early March when he becomes Chairman.  I hope that you will join me not only in supporting and endorsing his candidacy, but in stepping up for the CRP “renewal” that needs to take place under his leadership.  I don’t have to tell you how the public employee union bosses, the trial lawyers, and the enviro-whacks are all working together to do everything they can to do harm to California.  Only a resurgence of a vibrant California Republican Party can serve as a counter-balance to their extreme agenda.

Of course if you throw down all of this rhetoric to the humble Senator Brulte, he would pause, smile, look you in the eyes and say, “I just want to pick up seats, and bring the positive message of our party to people who have yet to hear it.”

[The photo of Brulte and Rogan above was “lifted” from Rogan’s Facebook library, without asking for permission.]