Regulation is the enemy of freedom

The U.S. Constitution provides for certain government regulations, but actually stresses minimum involvement. Regulations are merely a way for the government to implement social change and impart control. 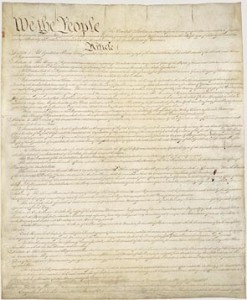 But government intervention usually causes more harm than the problem the regulation sought to correct; most government regulations don’t work.

During a dinner party discussion with friends this weekend, the subject of gun control came up. “No one needs an assault rifle,” one friend said. “No one should be allowed to have one. I mean, who really needs one?” she insisted. She was serious.

“Says who? Who decides?” I asked her. “The government?” I said that the U.S. Constitution guarantees our right to keep and bear arms, and does not differentiate between a handgun or an AR-15.

She didn’t answer my questions, but kept insisting that citizens should not be allowed to own big guns.

I told her that the government has recently redefined what an “assault rifle” is, and asked her if that was right. She did not answer that question, either.

The gun discussion in America has become one of emotion and control versus fact and logic. But the media and liberals are fighting gun owners, as well as the Constitution.

I happened to catch Sean Hannity’s show Friday, where he had Champion shooter Jesse Duff demonstrate several weapons. In the video below, Duff shows that an AR-15, 223 caliber, and leaves much less damage and smaller bullet holes than a .45 handgun. A 12 gauge shotgun will do much more damage.

But someone in government decided that because the AR-15 looks scary and can fire more than one round at a time, it’s the gun that’s dangerous.

It’s all about control

Our dinner discussion never made it to a logical conclusion because my friend’s argument was entirely emotional and irrational, and she would not listen. Her mind was made up.

I asked her where these decisions should be made, and who gets to make them. She looked at me dumbfounded and indignantly said, “the government.”

But where does it end?

Will the government decide that four kitchen knives is enough?

Or how about the size of cars? The media says that SUV’s kill. Is an SUV too big and too dangerous?

Is one bathroom in a house enough?

How about the size of a home? is a 4,000 square foot house too big? Undoubtedly someone in the government thinks it is.

Bureaucrats can’t help themselves — regulating people and behavior is what they think they were elected to do.

Just since November when President Barack Obama was re-elected, the federal government has issued hundreds of new regulations.

Heritage Foundation senior fellow James Gattuso calls President Obama “the No. 1” regulator in American history. “Now, there is some competition – and competition not just from Democrats, but from Republicans,” Gattuso told Fox News. “Both of the Bushes engaged in a lot of regulation, if you look at the record. But on present track, President Obama may be the most pro-regulation president we have ever had.”

According to Gattuso, the greatest number of new major regulations issued in 2012 were the regulations from the “Dodd-Frank” Regulatory Reform Bill, which increased government oversight of trading in complex financial instruments such as derivatives. Named after Sen. Christopher Dodd and U.S. Representative Barney Frank, the bill restricts the types of proprietary trading activities that financial institutions are allowed to practice, with the intent of preventing the collapse of major financial institutions such as Lehman Brothers from happening again.

“Dodd-Frank” was signed into law by Obama.

“The most expensive new regulations, however, emanated from the Environmental Protection Agency, which issued four “major” rules costing the U.S. economy an estimated $4 billion a year,” according to Fox News.

Regulatory expansion hasn’t hit us in the wallet yet

In “Red Tape Rising,” a report by the Heritage Foundation, a very start picture of regulatory expansion has taken place during the Obama administration’s first three years. Since only January 2009, 106 new “major” regulations have been enacted, at a total estimated cost of $46 billion, plus almost $11 billion more in implementation costs, Fox News reported.

The Heritage Foundation found that escalating regulatory costs undermine the American economy, and in particular, small businesses. Most business owners will admit that every new regulation causes them to either cut back on workers, or that they simply cannot expand, dramatically impacting job growth in the country.

It appears that the job of being a bureaucrat means creating more regulations. Where does it stop?

Neither the U.S. Constitution nor Congress seems to be in the way of President Obama when he wants something passed.