I’m still convinced that the business coalition supporting reform of the California Environmental Quality Act (CEQA) made a strategic decision to join State Senator Michael Rubio (D-Bakersfield) in never addressing – or even acknowledging – how unions have perfected the widespread and pernicious abuse of CEQA to win labor agreements and block non-union competition.

If Republicans in the legislature buy into this strategy, www.FlashReport.org publisher Jon Fleischman will be right when he tweeted this prediction:

Look for CEQA reform to be like the so-called Pension Reform.#FIGLEAF

However, signs are encouraging that unions may not succeed in deceiving the public as Phony Union Tree Huggers. Perhaps emboldened by the California Labor Federation’s aggressive stance against CEQA reform as a member of the anti-reform coalition called CEQA Works, some of California’s news media are pointing out that unions are unusually active in objecting to proposed projects (including many “green” projects) on environmental grounds:

Soon an enterprising California reporter (or national reporter) will draw attention to labor union CEQA exploitation with an investigative article. In recent years, the New York Times did this with a June 18, 2009 article A Move to Put the Union Label on Solar Power Plants; also, the Los Angeles Times did this with a February 5, 2011 article Labor Coalition’s Tactics on Renewable Energy Projects Are Criticized.

I anticipate this future investigative article will flush out the union greenmail by either providing a broad survey of 20 years of union CEQA abuse or by focusing in-depth on one of the dozens of recent union CEQA document dumps and lawsuits against proposed projects.

Here are the top examples of union “greenmail” in 2012 and in 2013 that are ripe for investigation and exposure.

The most high-profile union-instigated CEQA action in California in 2012 was targeted at the proposed San Diego Convention Center Expansion, Phase 3, estimated to cost $520 million, or more than $1 billion total if interest on borrowed money through bond sales is included. Unions hired the law firm of Adams Broadwell Joseph & Cardozo to advance the union objections. The saga is summarized on the web site www.SanDiegoConventionCenterScam.com: 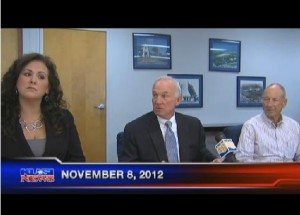 Press conference on November 8, 2012 announcing a deal between unions and the City of San Diego to end CEQA objections to the Convention Center expansion.

Read an account of the outrageous incidents that occurred at the September 19, 2012 meeting of the United Port of San Diego Board of Port Commissioners, where union leaders and their law firms brazenly pulled a “document dump” in front of the city’s civic leadership: Unions Threaten Environmental Litigation to Block San Diego Convention Center.

Yet all these environmental problems disappeared (except for some minor environmental mitigation in three settlement agreements between these unions and the City of San Diego) once contractors were required to sign a project labor agreement with unions as a condition of working on the project and unions won a memorandum of understanding expanding the unionization of the convention center workforce.

Mayor Jerry Sanders (who was about to leave office) held a press conference on November 8, 2012 with the county’s top union official Lorena Gonzalez (who is planning a campaign for a California State Assembly seat) essentially to announce that the union environmental extortion “greenmail” was effective. The unions made “deals” with the City of San Diego and the prime contractor (a joint venture of Clark Construction Group and Hunt Construction Group) for the San Diego Convention Center Expansion, Phase 3.

The California Coastal Commission may soon consider approval of this project, now unimpeded by earlier concerns cited by unions about how the sea-level rise caused by global warming might submerge the convention center expansion.

People in Mono County are incredulous about the tremendous opposition of construction trade unions (specifically, California Unions for Reliable Energy (CURE) and Laborers Union Local No. 783) to the Ormat Technologies proposed upgrade of its long-existing Mammoth Pacific I geothermal power plant and its proposed Casa Diablo IV geothermal power plant. Actually, every Californian should be outraged about this new round of union “greenmail.”

The web site www.PhonyUnionTreeHuggers.com explains what has happened so far with the proposed Mammoth Pacific I plant upgrade:

At the October 11, 2012 meeting of the Mono County Planning Commission, a staff member informed the commission about “documents received just today” from the law firms of Lozeau Drury and Adams Broadwell Joseph & Cardozo. In response, one commissioner stated that “last-minute documents can’t be read in two minutes without any background.” The commission approved the project on a 4-0 vote.

Also on October 19, 2012, the Laborers International Union of North America (LIUNA), Local No. 783 (LIUNA) appealed the Mono County Planning Commission’s decision to approve the Mammoth Pacific I Replacement Project at its October 11, 2012 meeting. The union was represented by the Oakland law firm of Lozeau Drury.

Local officials knew that Ormat Technologies has been pressured to sign Project Labor Agreements giving unions a monopoly on construction and maintenance. Unions have also harassed the company at the Imperial County Planning Commission, the Imperial County Board of Supervisors, and the California Energy Commission as it seeks approval for geothermal power plants in Imperial County such as Hudson Ranch II.

In fact, the February 28, 2013 meeting agenda of the California Energy Commission includes this item:

The comments and associated exhibits are linked at Unions’ January 30, 2013 Comments Against Geothermal Power Plant Must Have Overheated the Printers!

Kevin Dayton is the President and CEO of Labor Issues Solutions, LLC and is the author of frequent postings about generally unreported California state and local policy issues at www.laborissuessolutions.com.