Having had a day to begin the recovery process from yet another California Republican Party convention, I thought I would take the opportunity to share some thoughts about the weekend.  Starting with some “big picture” observations first, and in no particular order…

The biennial organizational convention of the committee is typically a well-attended affair, and this one proved up to the expectation.  With well over a thousand delegates on hand (not to mention all of the guests as well) there is no doubt the event was a money-maker for the cash strapped California GOP.  While attendance tapered off at some of the other meal functions where the speakers were lower profile — the attendance at the Saturday luncheon was stunning in its size, for a CRP convention.  There were many press accounts of Rove’s speech, and you can check out my exclusive convention sit-down video interview with Rove here.  I would largely characterize the mood of the delegates as “resolved” — it wasn’t as celebratory a crowd is in some conventions past, but then the CRP is at a challenging time in its history, and even with some new leadership coming in to excite and energize everyone, there is a daunting task ahead for all. 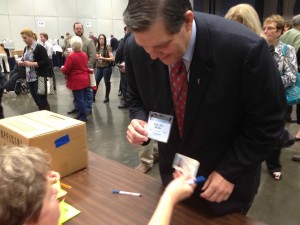 Jim Brulte shows his "government issued photo ID" to get his ballot.

The election of conservative Jim Brulte to the helm of the party was really a fate accompli going into the weekend.  In the preceding months the former Senate Republican Leader ran a textbook campaign, putting a ton of time and energy into doing a very thorough job.  He traveled all around the state making countless appearance and delivering many speeches.  His campaign sent out multiple mail pieces to the delegates, and waged an aggressive e-mail blitz as well.  Brulte spent time engaging all of the federal and state legislators, and talking and meeting with many individual donors and donor groups.  Brulte’s ground-game at the convention was no less impressive.  Brulte himself was omnipresent — I’m fairly certain that no official GOP group or meeting took place within the convention itself where he did not swing by to talk to gathered delegates.  Of course his campaign signs and literature were everywhere.  He had high-caliber party leaders give his nominating speeches – Congressman Tom McClintock, Board of Equalization Member Michelle Steel, and San Joaquin County Chairman Tony Amador.  He did not 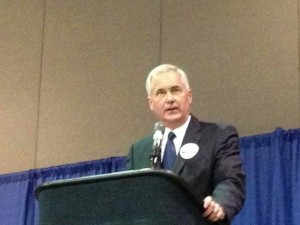 take his campaign or the delegates for granted.  I could probably take a few paragraphs and try to mention all of the folks I know assisted Brulte with his campaign.  As an early and strong supporter myself, who did some lifting, I was in a position to see many of them.  But I will take the time to extend kudos to former CRP Chairman Mike Schroeder who was (in essence if not in title) Brulte’s campaign manager.  All campaigns require somebody who makes sure all of the aspects are being run well, and for Brulte’s effort it was Schroeder.  Congratulations to Senator Brulte on the solid win (with close to 90% of the vote).  Of course what follows on the intense sprint to the chairmanship is the much more daunting task of party governance, and building towards success in 2014 and beyond… 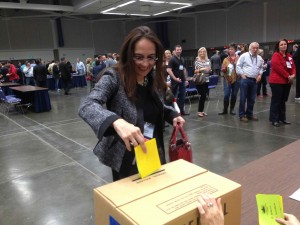 Also benefiting from the execution of a pretty flawless campaign was Harmeet Dhillon, who clinched the party’s Vice Chairmanship by nearly as large a margin as Brulte’s win.  Leading the charge for Dhillon out the gate was popular Republican National Committeeman Shawn Steel.  Also playing a key role in Dhillon’s decisive victory was former CRP Chairman Ron Nehring.  Nehring is, of course, a pro at running internal party races, and no doubt his insights proved invaluable to Dhillon.  The party’s Treasurer, Mike Osborn, and Secretary, Patricia Welch, were elected without opposition.  Five regional vice chairman seats (out of eight) were up for election over the weekend as well.  The winners there were: Northwest – Elissa Wadleigh; North – Arnie Zeiderman; Bay Area — Kevin Krick; Central Coast — Greg Gandrud, and Central Valley — Marcelino Valdez, Jr.  The three southern regions elect their vice chairman at the fall convention which will be held in Orange County.  Re-elected by his peers was Yolo County Chairman Mark Pruner to the position of President of the Republican County Chairmans Association. 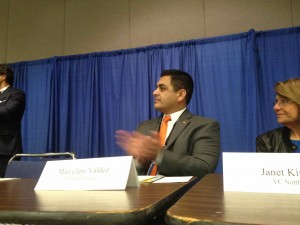 A number of key party leaders stepped away from party leadership after many years, some due to term limits, others by a conscious choice to let others take on leadership roles.  Retiring from the party’s board of directors (in no particular order) — longtime Treasurer, Assistant Treasurer, Regional Vice Chairman and Budget Committee Chairman Doug Boyd — Bay Area Regional Vice Chairman Morgan Kelly, Northwest Regional Vice Chairman Janet Kirtlink, Central Valley Vice Chairman Prudence Eiland, and Immediate Past Chairman Ron Nehring.  Outgoing Vice Chairman Steve Baric was appointed by Chairman Brulte back to the board, on Sunday, as the new Budget Committee Chairman.  And retiring CRP Chairman Tom Del Beccaro assumes a seat on the board reserved for the most recent former Chairman.  Republican National Committee members Shawn Steel and Linda Ackerman were both re-elected to four year terms last spring, and sit on the CRP Board.  Speaking of former Chairman Tom Del Beccaro, it is worth noting that for someone who had a less than ideal tenure as Chairman of the Party, Del Beccaro was given a positive send-off by the committee, receiving a lot of praise from delegates for his dedication to the party.  Del Beccaro was headed to Europe following the convention, and Brulte presented Del Beccaro with a substantial travel gift certificate on behalf of the outgoing Board of Directors. 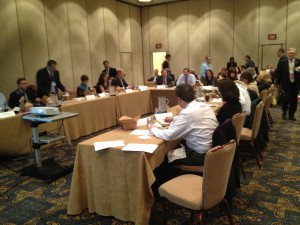 The CRP Board of Directors Meets

I took the opportunity before departing from the convention to slip in to observe the first part of Brulte’s first Board of Directors meeting.  His powerpoint-driven presentation began with a bullet point on best management practices and went into great detail from their about the principles that Brulte would use in his governance of the party.  With Senate Republican Leader Bob Huff and Assembly Republican Leader Connie Conway joining the newly re-elected Board, the only “empty chairs” were for two yet-to-be-named board appointments — a Finance Committee Chairman and a Team Cal Chairman (Team Cal is fundraising auxiliary arm of the CRP).  Besides the aforementioned appointment of Steve Baric as Budget Committee Chairman, the only other appointment made by Brulte at that meeting was that of a new Executive Director (COO) of the party.  His pick, which was unanimously ratified by the board, was Cynthia Bryant.  Bryant, an attorney, served as a senior staffer to Brulte when he was in the legislature.  She served many years in top positions for Governor Schwarzenegger, and most recently was working for a charter schools advocacy organization.  Before the board went into closed session to discuss financial and legal matters, Brulte announced that he had secured a number of significant donations, and in fact presented the board with a $50,000 donation from a donor right on the spot.  At the meeting Brulte announced that Brent Lowder, who had served for many years as the party’s top staffer, had informed him that he would be departing after the end of Del Becccaro’s term.

I should add that the level of “political intrigue” tends to vary from convention to convention.  This particular weekend seemed to have virtually no drama — I know that the party’s conservative leaders were focused on electing Brulte.  Perhaps the only harbinger of an internal political issue raising its head just in time for Brulte’s election is a question of what the CRP will do to further adjust their internal process for endorsing candidates for partisan office, in the wake of the passage of Prop. 14, which virtually everyone on the Central Committee opposed, and which was passed with the purpose of minimizing the role of political parties in the process.  There was some discussion of this issue in the party’s Rules Committee meeting.  Some delegates had put forth a proposal to establish local caucuses for handing out party endorsements prior to the June election.  The committee was reminded that under the CRP bylaws, the party was to adopt new rules for handling party endorsements for 2014.  The two take-aways I had from that meeting and discussion — one was that it was expected that a “blue ribbon committee” made  up of a cross-section of the party would be tasked with developing a proposal, and the other was that everyone felt that the current process where endorsements were ultimately decided by a 23 member board of directors in a back room was desirable by no one, and that a much broader, participatory process must be developed.

Looking forward — there is no doubt that an epic challenge faces the California Republican Party.  That having been said, the feeling that this convention has started the party moving in the right direction was definitely pervasive, and so we will see where things go from here.  From a logistical point of view, CRP Board Members can look forward to an Inland Empire weekend retreat in just a week and a half from now.  CRP delegates, guests, our friends in the media, and others can note on their calendars at the Fall CRP Convention will be held the first weekend in October, the 4th – 6th, at the Anaheim Hilton Hotel in the heart of Orange County.