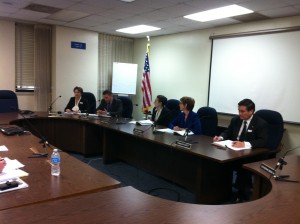 Why is this happening? The people of California approved it.

In November 2008, 52.7% of voters (including 78% of voters in San Francisco) approved Proposition 1A, the “Safe, Reliable High-Speed Passenger Train Bond Act for the 21st Century.” Proposition 1A authorized the state to borrow $9.95 billion for design, environmental review, land acquisition, and construction by selling bonds to investors.

These bonds are “general obligation bonds” like the ones sold for school construction in California. This means the state can repay the bonds from any revenue source. They are not “revenue bonds” to be repaid specifically by the operation of the high-speed train.

But $9.95 billion is not the real cost of these bonds for taxpayers. Institutional investors won’t buy these bonds because they love trains or want to save the planet from global warming. They want to make money off the interest!

The official legislative analysis of Proposition 1A hinted at the true cost:

The costs of these bonds would depend on interest rates in effect at the time they are sold and the time period over which they are repaid. While the measure allows for bonds to be issued with a repayment period of up to 40 years, the state’s current practice is to issue bonds with repayment period of up to 30 years. If the bonds are sold at an average interest rate of 5 percent, and assuming a repayment period of 30 years, the General Fund cost would be about $19.4 billion to pay off both principal ($9.95 billion) and interest ($9.5 billion). The average repayment for principal and interest would be about $647 million per year.

A July 7, 2008 Senate Appropriations Committee analysis estimated the cost of selling bonds with a 40-year maturity:

AB 3034 would extend the maximum allowable bond maturity term from 30 years to 40 years. Assuming the same interest and inflation rates, this bill could result in an increase in total General Fund costs of $3.78 billion if the term of the bonds is extended to 40 years (to a total cost of $23.2 billion).  Annual debt service payments would be $580 million for 40 years.

According to Section 5.02(b)(vii) of the resolutions passed on March 18, the Treasurer is now authorized to borrow the $8.6 billion by selling bonds with a maturity period of 35 years. 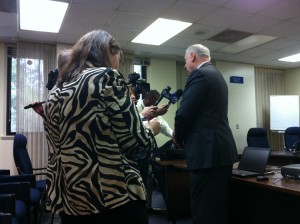 I did not receive answers to these questions, except to be told that the California State Treasurer gets to make decisions about when and how the bonds are sold. But after the Authority board meeting was over, news media peppered California High-Speed Rail Authority chairman Dan Richard with similar questions about the bond sales.

Chairman Richard also stated that the interest on the bonds would not be paid from the state’s general fund, but from “vehicle weight fees.” These are fees truckers must pay to compensate for damage they cause to roads.

This transfer of funds is apparently allowed because of California Vehicle Code Section 9400.4, enacted through a budget trailer bill (Assembly Bill 105) in 2011. Estimated revenue for the state from vehicle weight fees in 2012-2013 is $932 billion.

Kevin Dayton is the President and CEO of Labor Issues Solutions, LLC and is the author of frequent postings about generally unreported California state and local policy issues at www.laborissuessolutions.com. Follow him on Twitter at @DaytonPubPolicy.