In November 2008, 52.7% of California voters approved Proposition 1A, which authorized the state to borrow $9.95 billion for the “Safe, Reliable High-Speed Passenger Train for the 21st Century” by selling bonds to investors. Support has slipped since then.

A 2011 Field Poll and a 2012 USC/L.A. Times poll showed 59% of California voters would reject Proposition 1A if put back on the ballot. A 2013 Public Policy Institute of California poll indicates that 54% of likely voters outright “oppose” the high-speed rail project as it stands now.

Frankly, these polling results are astonishing. Why does a significant minority of Californians STILL support California High-Speed Rail after all of its financial and management fiascoes? 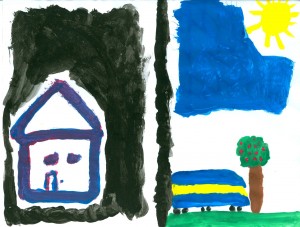 Before and After? California voters and 4th graders need to hear more diverse perspectives about California High-Speed Rail.

Well, there’s a sizeable group of Californians who regard high-speed rail as an evolutionary step toward enlightened collectivism. Another group recognizes it as an opportunity to make a lot of money off of taxpayers through its design, engineering, construction, or operation.

Their minds are made up. That leaves another group of California voters who still support high-speed rail but don’t have an ideological or financial interest in it. In most cases, these Californians aren’t aware that the state has pulled a bait-and-switch.

A general rule of thumb: the more someone knows about California High-Speed Rail, the more likely that person wants to pull the plug on it before debt enslavement occurs. Here are ten facts to cite when discussing high-speed rail with marginally-supportive Californians.

1. In 2008, Californians voted for Proposition 1A, which hinted at a $45 billion statewide high-speed train system linking Southern California counties, the Sacramento/San Joaquin Valley, and the San Francisco Bay Area. Now it’s a $68 billion high-speed rail line to connect San Jose and Palmdale while tacking on some improvements or expansions to existing infrastructure to reach San Francisco and Los Angeles. (This is the so-called “blended system” with its “bookends.”)

2. California High-Speed Rail was never intended to zip alongside I-5 between San Francisco and Los Angeles. It’s a Local, including stops in Merced, Fresno, Bakersfield, Palmdale, and maybe Hanford. (The rumored Pixley station was an April Fool’s Day hoax.) Cities and counties in the Central Valley demand these stations to bring jobs and economic prosperity. Even more, cities and counties covet the high-speed rail’s “Heavy Maintenance Facility,” despite the greenhouse gas emissions it will produce.

3. Claims made in Proposition 1A for an “efficient 220 MPH transportation system” to go non-stop from San Francisco to Los Angeles in 2 hours, 40 minutes were foolhardy. The train will have to slow down south of San Francisco (on the Peninsula), over the Pacheco Pass (the passage for Highway 152), and through the Tehachapi Mountains. Besides, how many trains in practice won’t be making several stops along the way?

4. Proposition 1A claimed that the high-speed rail would get “federal, private, local, and state monies.” In fact, state law requires the California High Speed Rail Authority to “obtain other private and public funds.” But the federal government is dealing with a $16.7 trillion debt and recent annual budget deficits over $1 trillion. In addition, there are no serious potential private investors: corporations want to GET money through contracts with California High-Speed Rail, not GIVE money to it as an “investor.”

5. Did you read the fine print of Proposition 1A? The figure of $9.95 billion in the title of Prop 1A was NOT the cost of the high-speed rail. That was the amount voters authorized the state to BORROW to get the project underway by selling bonds to investors. That borrowed money will have to be paid back, with interest! The real cost of Proposition 1A – with interest – was cited at $19.4 billion, and “the total cost to develop and construct the entire high-speed train system would be about $45 billion.” (That figure was atrociously wrong.)

6. Where will the state get money to pay interest on the bonds to investors? The chairman of the California High-Speed Rail says it will come from vehicle weight fees paid by trucks – fees originally meant to compensate for road damage. This money shift is actually allowed by a state law enacted in 2011. According to Proposition 1A, interest payments may “average about $647 million per year.” Less for roads, more for Wall Street bond investors.

7. Unions have a monopoly on construction of the high-speed rail because of a “Project Labor Agreement” disguised under the nice-sounding euphemism “Community Benefit Agreement.” This will be the most expensive construction project in human history, and it will attract union workers from all over the country (and probably other countries) to the Central Valley. (Union health insurance trusts should plan for many cases of “Valley Fever,” courtesy of Coccidioides immitis.)

8. That same “Community Benefit Agreement” includes provisions encouraging contractors to employ people with such challenges as these: (1) being homeless; (2) being a custodial single parent; (3) receiving public assistance; (4) lacking a GED or high school diploma; (5) having a criminal record or other involvement with the criminal justice system; (6) suffering from chronic unemployment; (7) emancipated from the foster care system. The desire to help the disadvantaged is noble, but it is appropriate for a high-speed rail project?

9. In 2008, 78.4% of San Francisco voters approved Proposition 1A. Why isn’t that city contributing a disproportionate amount to a project that won’t serve most of the state? Proposition 1A anticipated municipal investment – where is it?

10. The claim that passengers will one day conveniently buy a ticket and then hop aboard the train without time-consuming security lines is utter nonsense. The California High-Speed Rail Authority will need to adopt comprehensive passenger security procedures and provide costly protection for the rail itself in urban, suburban, and rural environments. Future governors will surely place a priority on continually evaluating vulnerabilities and threats, and the state legislature will have endless challenges getting funding for programs to protect the high-speed rail system from terrorist attacks, pranksters, fools, and suicides. Expect these programs to include unionized government employees and expensive technology, including drones.

Word-of-mouth among family, friends, coworkers, and others in daily life can overcome the mutli-million dollar public relations operations of the California High-Speed Rail Authority and the corporations, unions, and Wall Street investors poised to make huge money on this project.

Voters Very Aware of High Speed Rail Project – Large Majority Wants Legislature to Call a Revote on the Bond Package – Majority Would Vote No if an Election Were Held Today – Field Poll – December 6, 2011

Majority of Californians Would Oppose High-Speed Rail if Given Another Chance to Vote on It – USC Dornsife/L.A. Times Poll – June 2, 2012

Project Labor Agreement (aka Community Benefit Agreement) Giving Unions a Monopoly on Construction (See Section 1.8 on page 3 for references to hiring the homeless and other disadvantaged groups.)