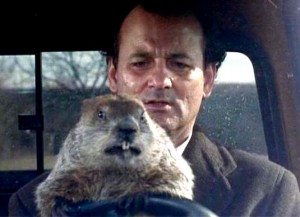 One of the greatest comedies of all time is the film Groundhog Day, starring Bill Murray who plays TV weatherman Phil Conners, sent to Punxsutawney, Pennsylvania to see whether the groundhog comes out and sees his own shadow or not.  In the movie, Conners keeps reliving February 1st over and over again.  If you haven’t seen the movie, I strongly encourage you to check it out.  Hillarious.

As I write (yet) another column about (yet) another effort by liberals in the California State Legislature to ban plastic bags at grocery and retail stores, it kind of reminds me of the Groundhog Day movie.  It’s a new legislative session, and yet another plastic bag ban.  Not so funny.

Once again, a Democrat legislator — this time State Senator Alex Pedilla — has introduced legislation (SB 405) that would prohibit plastic bags in grocery stores and pharmacies starting in 2015, and the ban would expand to include convenience and liquor stores in 2016.

The left is making the same, stale arguments against plastic bags — arguing that they are bad for the environment (inconveniently not borne out by the facts).  But of course the plastic bags that you and I use in the store (you know, the ones that let you juggle eight bags with ten fingers and still manage to get the trunk open) aren’t the culprits.  After all, our bags get used and then we either save them for use around the house, doggie poo clean up, or we throw them away.  Of course there are some that litter with their plastic bags, but what fun would it be for the left to target only those who litter (whom they no doubt categorize as ‘victims of society’)?

Why do we have plastic bags in the first place?  The answer is straightforward — consumer demand.  People enjoy the convenience of using a plastic bag.  The factors are many – but low cost and ease of use are right up there on the list.  Here in America, a country based on the principles of liberty and freedom, it seems that being able to responsibly use the means of your choosing to transport your groceries should be safeguarded.  Is it too much for ask those in our government to protect our way of life, rather than seeking to manipulate it, and lessen it, because they want to impose their personal values onto the rest of us? 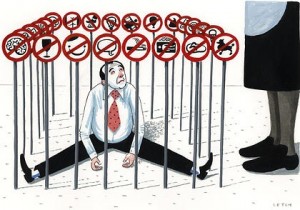 On the left you have two rabid coalitions that come together on this (their membership overlaps heavily) — the enviro-nuts who would actually be pleased if we could slowly step back from this continent and leave it as we found it — and the nanny-statists, that get their high off of using the coercive power of government to tell people how to lead their lives.

Joining the enviro-nuts and the nanny-statists are a third interest group — we’ll call them the rent seekers.  These are the folks motivated by greed, who have figured out how to make a profit from this onerous government regulatory scheme.  Heading up the rent seekers is the California Grocers Association.

“How would the trade association representing grocery stores make money off of banning plastic bags,” you ask?

That’s actually not too difficult to figure out. You see the “teeth” in Padilla’s plan, to “force” change in our behavior, is to not only ban plastic bags, but to mandate a tax to be charged to the shopper to sell them a paper bag.  It is through this fee that grocery stores make a killing.  Right now they provide plastic bags for free, but if they can charge a fee on a paper bag, apologize to the customer but tell them it’s a government mandate, but then make a profit from the tax — well that’s big bucks for the stores.

As reported over on the California Briefing website, Senator Padilla told KNX 1070 radio in Los Angeles, “I believe whether it’s a 10-cent fee, a 5-cent fee, a fee to be determined, is appropriate.  Minor, minor cost to the consumer, but part of making a big impact on protecting the environment.”

According to the Los Angeles Times, Ron Fong, president of the California Grocers Association, said his group supports SB 405 for “consistency and predictability for consumers.” Complying with dozens of slightly different city and county laws is complicated and expensive, he said.

This is complete and total hooey and spin.  This is all about money for the Grocers.  They are being somewhat honest about being unhappy with the hodgepodge of local ordinances, but that is because in some cities both paper and plastic bags have been banned, and in others there has been a ban, but with no mandated fee for a paper bag.  The Grocers consistently send letters of support in favor of the local ordinances — if they include a mandated bag tax.

This morning Padilla’s bill is scheduled to be heard before the Senate Environmental Quality Committee.  A quick review of the Senators on that committee confirms that it is stacked with enviro-nuts, and so I would not anticipate the brakes being put on the terrible piece of public policy manipulation today.  That said, I strongly encourage all nine Senators on that committee to vote down this ill-advised bad bill.  If they don’t, no doubt you’ll hear more about this again.

At some point the regular people of California are going to wake up and realize that the folks that are running state government are not good stewards.  If this bag ban is enacted, one (and maybe the only) upside is that there will be enormous disdain for those in state government who would tell them to ditch their convenient plastic bags.