Through The Looking Glass — Gender Is Not Objective, It Is Subjective

There are days when one wonders why the Democrats who control all of the levers of California government don’t simply enact into law an edict that everyone in the state is dubbed to be prosperous, and that each and every one of us shall officially have all that we desire.

I say that, of course, tongue in cheek — but I say it because it is so often the case that what passes for serious legislation in the State Capitol isn’t rooted in any kind of reality, or makes absolutely no sense at all.

OK, so raise your hand if you have ever heard of the phrase, “gender identity.”

Of course you raised your hand — and your answer is correct.  Everyone has a gender identity, they are either a boy or a girl. 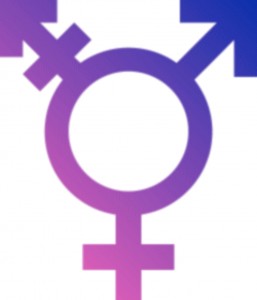 The "Transgender" Symbol - Indicating You Can Really Be Either Sex

So I guess I really need to ask my question a different way.

Raise your hand if you think that whether you are a male or a female is a subjective question?  In other words, can you choose your gender?

Welcome to the “modern era” where we now have the phenomenon of a “trans-gender” person.  What does this mean?  Well this means that never mind the sex you were born (based on the hardware in-place at birth) — a person can “choose” to be the opposite sex.  This can range from a simple declaration I suppose, to cross-dressing and such, to the extreme step of actually get surgery to “swap out” the plumbing you received at birth with that of the opposite sex.

Now I can get into a whole conversation at this point where I get into my personal opinion about transgendered individuals.  I will say that I do not understand that kind of behavior — and I am really not comfortable with it.   But live and let live, as they say — until government starts to get involved.  Liberals in the State Capitol start advancing laws to take what are really bizarre behaviors and, well, say that they are normal — and use the coercive power of government to literally force all of us to confirm to their bizarre sensibilities.  So, for example, if you think to yourself, “someone who goes in and has major surgery to remove their penis and have a uterus put into their body is not mentally all there” — well, you are now a bigot.  Because in liberal-land, there really are no moral absolutes.  Everything is relative, and everything is subjective.

So it only stands to reason that you would see a law saying that you may not discriminate against someone because they are trans-gender here in California.  That’s already on the books.  So even though you might THINK that having a man putting on a dress and wearing lipstick is — exhibiting bizarre behavior — you had best keep it to yourself, else you might get sued.

But this year the legislature is taking it a couple of steps further (of course).  A pair of Democrat-authored “trans-gender fairness” bills that just this week have passed out of the Assembly (on largely party-line votes, with Republicans in opposition).

The first, AB 1121, authored by Assemblywoman Toni Atkins, allows a transgender person to actually have their birth certificate changed — I guess to indicate the sex they want to be (or perhaps post-surgery, their actual new gender, to the extent you believe that you are how you are plumbed).  You have to wonder if Atkins would have actually preferred to eliminate the designation of a gender all together.

The second bill is so — mind boggling — that you may not actually believe it’s a real bill, but it is — and it’s already passed out of the legislature’s lower chamber.  This legislation, AB 1266,  authored by Assemblyman Tom Ammiano, requires school districts to… Well, let me just reprint an excerpt from a Los Angeles Times story by Chris Megerian on the bill…

The Assembly approved on Thursday legislation that would ensure students could participate in school activities and use facilities like bathrooms based on their gender identity, not their physical sex.

The bill’s author, Assemblyman Tom Ammiano (D-San Francisco), has said the legislation is another step toward making sure transgender students are not ostracized in their schools.

For example, a student born male but identifying as a female would be able to play on a girls’ basketball team and use the girls’ locker room. The deciding factor would be a student’s gender identity, not what’s listed on school records.

So in essence someone’s sex is now completely and totally subjective.  It is literally up to the student to “declare” their sex and, well, end of discussion.  So my little daughter could end up in school with boys in her bathroom, her P.E. locker room, and in her activities designed to be with other girls — because a boy (who is not even an adult yet) has decided that, well, they want to be a girl.  Of course the opposite of this is the case as well, where a girl can simply declare that they feel like a boy, and for all purposes, they are now a boy.

Let’s be clear here — if you are nodding your head with disapproval or disbelief, YOU may want to consider seeing a counselor, because there is something wrong with YOU.  You are prejudiced and you are a bigot.  At least that is the mindset of those who promote this sort of behavior.  If you even suggest that perhaps advocates for this kind of gender-identify-self-selection are the abnormal ones — look out.

I presume this legislation will make it’s way through the Senate and will be signed by Governor Brown.

I will close this blog post with a bold statement.  Boys are boys.  And girls are girls.  They are not the same thing, and it is absurd to say that you can just “pick” to be one or the other.  Any more than you could choose to be tall or short, black or asian, or have naturally blond or brunette hair.