[Publisher’s Note: Last week all of us involved with politics lost a member of our “family” with the passing of Steven Kinney.  A friend, an advisor, and one of the country’s most accomplished political pollsters, Steve passed away last week after a battle with cancer.  I will miss him greatly.  I reached out to a mutual friend of Steve’s and mine – Dora Kingsley Vertenten – to ask if she would pen a eulogy of Steve.  Steve is survived by his wife, Cynthia.  Information on a memorial service to be held in early June can be found here.  If you have some thoughts or memories of Steve, feel free to comment below if you are a registered Facebook user. – Jon Fleischman]

Steve Kinney was a good man, honest pollster and wonderful friend.  He understood two key concepts increasingly rare in partisan politics today: protocol and respect for position.  More important than his great interest and expertise in politics, Steve was a man of deep faith who knew great love with his wife Cindy. 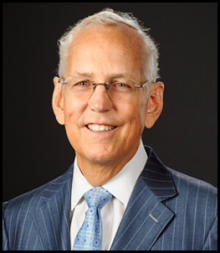 Somewhere along the road to Pete Wilson’s first election to the Office of Governor, I met Steve in Southern California.  By that time, he was a very experienced long-time aide de camp to Governor George Deukmejian and former Regional Political Director for the Republican National Committee while I was still a young Republican working as day-to-day campaign manager for a down-ticket statewide race.  Steve never seemed to mind young people like me just starting out their political careers.  He taught us at state party campaign schools and celebrated each promotion until the staff members he had educated became the peers with whom he collaborated.

Steve Kinney was a pragmatic partisan.  Raised in New Mexico, Steve had been trained by the U.S. Air Force which surely strengthened his allegiances to ideals.  Steve devoted his time working with California’s gentleman Governor Deukmejian and logged six years with the RNC to further inform his perspective before settling into Redondo Beach.  Steve’s involvement in public affairs and public relations spanned nearly 40 years including research in 52 of California’s 80 assembly districts and 22 of 40 senate districts.  In one decade, Steve Kinney was involved on behalf of individual candidates, the Republican caucus or independent organizations concerned with the outcomes of elections in virtually every competitive state legislative race.

Steve believed strongly in ethics.  For him, it was simple: there was a right way and a wrong one.  Steve and I once served the same client during a GOP nominee’s first strategy meeting post-Primary Election.  My opposition research presentation encouraged that candidate’s college kid (and volunteer coordinator) to let loose with a doozy of a liability not yet known publicly.  Steve Kinney never blinked at the news.  To the gathered insiders turning shades of puce to green, Steve merely and repeatedly said, “It will be alright, we’ll poll on that concern.”   To my curious self, seeing Steve at a state party convention post-November, he merely said “the campaign ended with that meeting, we never polled.”   Steve’s sense of protocol was ready whether the circumstances rose to meet him or not.

Steve Kinney also understood the importance of position as well as the role of power.  The youthful staffer who first gained footing during CRP trainings or RNC staff retreats ultimately grew up to hire the pollster.  Steve Kinney always acknowledged the individual role in an organization where he found us.  He would respect a Governor’s staff and their need for confidentiality while responding to the CRP Chairman who sought sound counsel.   Once inexperienced campaign recruits who grew up to work for Presidential campaigns commanded Steve’s full attention because he believed the Office of the President required no less of him.  Steve knew no other way.

If such a job existed, Steve Kinney was a grassroots organizer’s pollster.  His favorite lead in was to tell clients and party operatives alike that his “magic” (my term, not his) was the ability to ask questions correctly.  Steve would argue that outsiders or others didn’t phrase polling questions which could relate circumstances or situations to real decision makers, the voters.   That talent Steve had to elicit information from a likely voter also enabled him to be a talented lecturer on survey research, strategic communications, corporate relations and fund-raising.

In earlier times, Steve would argue that he and his firm, Public Opinion Strategies (POS) knew how best to poll California by weighting land line calls versus those who only used cell phones.  “Outside pollsters”, Steve would argue (those from out of state or beyond the GOP), did not connect sufficiently with the likely and registered voters.

In later years, as the momentum changed to focus on women voters and recruiting women candidates to represent the GOP; Steve would suggest he wrote questions that derived true understanding from the attitudes and aptitudes of voters.  Steve would argue that “others” didn’t properly phrase questions about women in the GOP correctly for the socially advanced Californian.  Steve would explain others’ results as voters put off by poor wording or bad assumptions in polling which could not align cultural norms with likely outcomes. 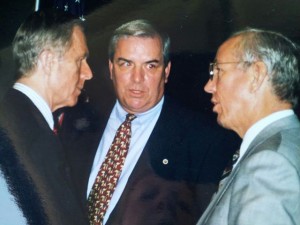 Lately, Steve focused on the Latino voter in California.  He was quoted as saying “most of our Republican pollsters still do not know how to ask the right questions when it comes to the Latino voters, we might get a surprise on November 6th.”  Steve’s prescient understanding of the emotion and sentiment of the California citizenry in their natural environment guided his efforts.  He led with his heart and understood with his head.

My clearest memory of Steve is a dinner that Lorelei Kinder and I had with him tucked away in the Burbank hills, on the patio with little white lights of an Italian restaurant I could not name nor ever find again.  Lorelei had a plan in mind (it mattered not about what) and Steve was ready to discuss the inevitable.  I learned that night what I already knew — Steve would rather talk about his wife, Cindy, and discuss cooking than spend much time at all on politics.

Upon Lorelei’s passing a couple of years ago, it was Steve who ensured protocol was maintained and that respect for her position was expressed so no one she valued was left unrecognized.  Under his direction and by his drafting, the program, speeches and acknowledgements were presented at a small reception held in the Senate GOP Leader’s offices, a fitting venue for both of them.  At the time, GOP consultant Ron Rodgers joined his best friend Steve in honoring shared public service and described to me a father’s admonition to buy a good dark blue suit at the age of 50.  When I asked why he kept that suit at the ready, Ron simply answered it was to attend gatherings for friends you never wished to lose.

If polled, we all would strongly agree that at age 69, Steve Kinney’s passing came too soon.

Dr. Dora Kingsley Vertenten is now a full-time Professor (teaching) with the Sol Price School of Public Policy at the University of Southern California.

Photo credit:  The photo above with Steve Kinney with the Congressman and Governor is courtesy of Steve’s friend, Renee Orefice.