How Republicans Can Win California

[Publisher’s Note:  We are pleased to offer this original column submitted to the FlashReport by United States Senator Rand Paul.  This evening at 6 p.m. Senator Paul will be giving an address at the Ronald Reagan Presidential Library.  You can watch the live webcast of his remarks here.  Enjoy! – Jon Fleischman] 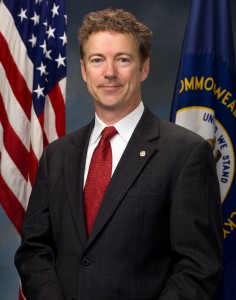 There has been an ongoing discussion about how the Republican Party must change and grow if it to survive, or as I like to put it “adapt, evolve or die.” It is true that Republicans have not done a very good job at attracting Hispanics, African-Americans and youth. It is also true that to win elections and govern nationally, the GOP will have to be more competitive in blue states that favor Democrats.

Nowhere is this perhaps more true than California.

To win in California, Republicans will have to show that we care just as deeply about the environment as Democrats but we also care about jobs. We want common sense regulations to be balanced with economic growth and jobs. Republicans will have to prove that the only thing worse than big government is when the big government gets together with big business to squeeze out the little guy. Many current federal regulations on business are actually supported by large corporations because they can afford them—while the small businesses cannot, and thus, big business uses the force of government to eliminate their competition.

To win in California, Republicans must show that they oppose the status quo in Washington, and endeavor to “throw the bums out” by supporting term limits. Everyone can agree that Washington is broken. Term limit everyone—myself included.

Republicans must champion choice in education, where Americans of all backgrounds, African-American, Hispanic and Asian, are allowed to choose the best schools for their children. A pastor friend of mine in Kentucky calls our current system, in which so many kids continue to fall behind, “academic genocide.” He’s right, and the status quo in education must end.

A more libertarian Republican might be able to attract support from California voters by ending the horribly unjust practice of mandatory minimum sentencing, in which non-violent drug offenders are put in jail along with murderers and rapists—often for sentences longer than murderers and rapist. Many of these offenders have no prior record. It is wrong to ruin the lives of young people for making a mistake and I will always do everything I can to keep non-violent offenders out of prison. I’ve introduced bipartisan legislation to end mandatory minimum sentencing.

Republicans should begin to take the Constitution and Bill of Rights more seriously—by taking all of it seriously, not just the parts conservatives usually like. I am a strong defender of the Second Amendment, but also the First, Fourth and Fifth Amendments, and as government continues to encroach on Americans’ privacy and civil liberties in so many ways, this will become increasingly important.

Californians should know that not all Republicans clamor for war, that libertarian Republicans like myself believe in a strong national defense but also believe we should only go to war reluctantly and constitutionally.

We must do something to fix our broken immigration system. We must be more welcoming to immigrants, who’ve always been an asset to America, not a liability. Coupled with border security, we must have immigration reform and soon.

I’ve spent the week traveling through Silicon Valley, meeting with the heads of Google, Facebook and eBay, and technological innovation will continue to create jobs and change our lives for the better, so long as government stays out of the way.

Elected in 2010, Rand Paul is the junior United States Senator from Kentucky.  You can visit the Senator’s official government website here, and his campaign website here.