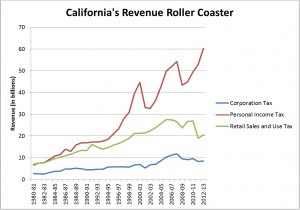 The constitutional deadline is just two weeks away and the Governor and Legislature are busy negotiating the state’s next budget. With Democrats now holding enough seats in the Legislature to pass the budget without Republican input, we can expect a budget that reflects their priorities and grows the size of the government. Fortunately for them, budget revenues this year are exceeding expectations and multi-billion budget deficits appear to be a thing of the past—at least for now.

As you can see in the graph, California’s “roller coaster budgeting” is based primarily on volatile personal income tax revenue. About 40% of this revenue comes from just 1% of California taxpayers, and much is related to investment gains. As a result, when the stock market does well, so does state revenue. But the opposite is true as well.

Recent voter-approved tax increases only make this problem worse. As California increasingly looks to high income earners for revenue, many are rethinking whether they want to keep living in California.

A recent survey found that a quarter of the state’s residents living in affluent communities are considering moving out of state to reduce their tax burden. The biggest factor in explaining whether or not someone is considering leaving California is whether he or she has a friend or family member who has made a similar move. The survey’s authors note this creates the possibility for a “snowball effect.”

As I’ve often said, tax policy has consequences. California’s budget may be balanced this year—at least on paper, but it’s anyone guess whether current revenues will be sustainable as we continue to ride this roller coaster.

Learn more about the Governor’s Budget at ebudget.ca.gov and cabudgetfactcheck.com.