You don’t need another example of how the Legislature wastes time and taxpayer dollars, but here’s a great one: AB 667.

This bill is nothing new. A version of it is introduced almost every session. Last go-‘round it was SB 469 by Juan Vargas, and it’s such a bad bill that even Governor Brown vetoed it, saying that “plenty of laws are already on the books” that throw hurdles and roadblocks in front of large retail stores before they can be approved and built. Before that, Schwarzenegger vetoed the same bill, and Governor Davis vetoed it before him.

The bill would make it harder to open a larger retail store — over 90,000 square feet — that also sells groceries. 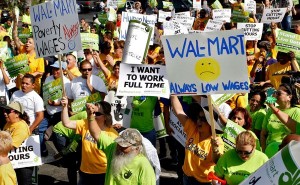 So how does the Legislature respond to this dead-on-arrival bill and choose to spend its valuable time? They introduced it again. AB 667 by Roger Hernandez passed from the Assembly to the Senate on last week.

To understand the mentality of Democrat legislators who will repeatedly push a bad bill, what you have to understand is that this bill would affect Walmart. By making it harder to open a retail store over 90,000 square feet that also has groceries, and specifically in economically challenged neighborhoods, it attacks the Walmart business model. For Democrats, attacking Walmart makes the unions to which almost all of them owe their positions, very happy. But the problem is that AB 667 isn’t about Walmart.

It’s shortsighted to think of only the jobs under a superstore’s roof. When a store like that open it has a ripple effect. A whole host of local small businesses that supply those stores live off of them. Ag producers love it when superstores open because they stock up on produce, and then they can cut costs by selling to one place rather than dozens or by selling locally rather than paying for the costs of transporting their product to other states or countries. Restaurants and other retail stores pop up around superstores, and a lot of them are mom-and-pop operations or locally owned franchises. Developers who put construction workers and others to work love it when they can land a superstore as an anchor tenant.

Will local businesses in Democrats’ districts jump and scream about this to their legislators so they know that throwing red tape in front of a superstore affects far more businesses than just Walmart?  I hope so.  Will it matter?  Probably not.  Every indicator seems to be that the unions sit in a room and make their “wish lists” of bills — and then the legislators whom they elected merely oblige.

Still, I hope every local elected official in the state opposes AB 667. All it would do is rip away local control over land use decisions. City councils and boards of supervisors already have the ability to prohibit superstores if they want to. They can order up studies and reports. They can determine for themselves what kinds of stores make sense. Roger Hernandez apparently thinks they’re no capable of doing that, though, because his bill would tell them that these kinds of stores are bad and it’s going to be harder to open them from now on, no matter how much a community or its residents want them.

This bill isn’t anything new, and if history is any guide, a Gubernatorial veto is likely in the offing.  But while Governor Brown is attempting to play “adult supervision” in the Capitol, he himself was still elected with massive union support.

We still have 10 percent unemployment (and much higher in the Central Valley and rural parts of the state) and we have dumb laws like this winding their way through the process.  AB 667 will only make economic recover that much more elusive.