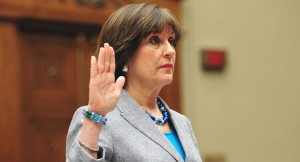 Lois Lerner "takes the 5th" at a recent Congressional Hearing

Internal Revenue Service Czarina of Tax Exempt Organizations Lois Lerner was not only targeting religious and conservative organizations, she was also shielding liberal groups from undergoing the exact same scrutiny.  This latest disclosure in the spreading IRS scandal comes from Missouri Congressman Blaine Luetkemeyer, who in May, 2010 brought his constituents’ complaints against Humane Society abuses directly to the attention of Czarina Lerner.

While the conservative organizations targeted by Lerner were seeking 501c4 tax exempt status (which permits political activity), it turns out the overtly political Humane Society was receiving tax-deductible contributions as a 501c3 organization, a classification that includes foundations and which must strictly limit any political action.

As a result of Luetkemeyer’s diligent pursuit of the matter, Fox News jumped on the case, reporting that not only had Lerner stonewalled Congressional calls for an investigation, but that Lerner was an active supporter of the Humane Society.  Fox also discovered that, despite the impression left by the Humane Society’s polished television ads depicting adorable pets for adoption in local shelters, it turns out the organization actually only spends 1% of its huge budget on shelters for animals, with the lion’s share devoted to political activism.  That activism includes attacks on farmers, cattle ranchers and sportsmen.  And, as Californians are now finding out, the Humane Society is also the political muscle behind attempts to ban hunting under the guise of banning lead ammunition.

The rationale for this “anti-lead” campaign is that California ranchers shoot predators and varmints on their ranches, which occasionally become lunch for the local condor, who then succumbs to lead poisoning.  Of course, not being picky eaters, condors also eat batteries and just about anything else they can choke down.  No matter, since the real agenda is to ban lead ammunition which is, coincidentally, about 95% of all ammunition used by hunters and sport shooters.   Since alternative ammunitions are classified as “armor-piercing” and require special permits (which of late have not been forthcoming from the government) the net effect is to ban hunting in the Golden State. 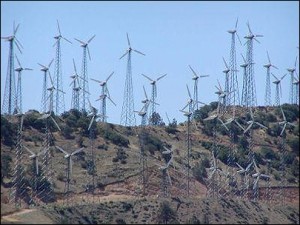 So far so good, just liberals being liberals, right?  Not so fast.  It turns out that an even bigger threat to condors may be the giant wind turbines slow turning in the desert, whose blades apparently can whack an even slower condor out of the sky like a slow-pitched softball.   We can all see the dilemma, of course.  Condors against wind energy pits two icons against one another.

Enter, the Audubon Society, which is supporting Assembly Bill 711 to completely ban on lead ammunition for hunters. Apparently, when it comes to saving condors from flying into windmills, they opted to support an entirely voluntary plan for wind turbine operators.  And what a plan it is.

The solution proposed is classic bureaucracy run amok.  The plan is in those areas where federal authorities suspect a condor may fly into the path of a killer windmill, the wind turbine company will build special stations manned by trained biologists who will, day after day, scour the horizon for any sign that these flying Quixotes are attacking.  If a condor is spotted, the biologist’s job will be to call the office and have the turbines turned off until “big bird” has safely flapped out of range.

I couldn’t make this stuff up.