As a young child, I was fortunate to be able to live in Newport, Rhode Island, the first British colony in America to formally declare its independence, and the first state to guarantee freedom of religion. 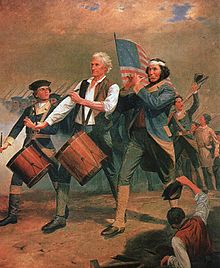 We lived a short time in an old home in downtown Newport, which survived the Revolutionary War. Soldiers fought the Brits from the upstairs windows of our home, according to local lore.

Newport was rife with constant reminders of The American Revolution. I used to imagine what life was like in 1776 Newport, when the state repealed its allegiance to King George III of England.

Reflecting upon Independence Day, it’s so important to remember the Revolution wasn’t just a rebellion against the King of England, it was a rebellion against being ruled by a monarchy. Our forefathers and many of our ancestors gave up everything and shed their own blood rather than submit unto King George lll.

Liberty and the Declaration of Independence

My early years were still during an era unembarrassed by, and unapologetic of America’s individualist morality. But by the time I entered college, America was undergoing significant moral, ethical, political and social change.

Globalism was being ushered in promoting the hegemony of Western culture, capitalism and free markets. The foundations of democracy and social stability were clearly being undermined.

Can this individualistic ethic be renewed in an America enveloped in entitlements and self-absorption?

Re-reading the Declaration of Independence, the nation’s most cherished symbol of liberty, helps refresh our ties to American history. Thomas Jefferson drafted it, and his words still capture the heartfelt convictions of liberty-loving Americans.

Jefferson rightly focused on the importance of individual liberty, ideals first shared by John Locke and the Continental philosophers.

Jefferson argued in his opening two paragraphs of the Declaration of Independence that a people had the right to overthrow their government when it abused their fundamental natural rights over a long period of time:

When, in the course of human events, it becomes necessary for a people to advance from that subordination in which they have hitherto remained, and to assume among the powers of the earth, the equal and independent station to which the laws of nature and of nature’s god entitle them, a decent respect to the opinions of mankind requires that they should declare the causes which impel them to the change

We hold these truths to be [sacred and undeniable] self evident, that all men are created equal and independent; that from that equal creation they derive in rights inherent and inalienables, among which are the preservation of life, and liberty and the pursuit of happiness; that to secure these ends, governments are instituted among men, deriving their just powers from the consent of the governed; that whenever any form of government shall become destructive of these ends, it is the right of the people to alter or to abolish it, and to institute new government, laying its foundation on such principles and organizing it’s powers in such form, as to them shall seem most likely to effect their safety and happiness. prudence, indeed, will dictate that governments long established should not be changed for light and transient causes: and accordingly all experience hath shewn that mankind are more disposed to suffer while evils are sufferable, than to right themselves by abolishing the forms to which they are accustomed. but when a long train of abuses and usurpations, begun at a distinguished period, and pursuing invariably the same object evinces a design to [subject] reduce them to arbitrary power, it is their right, it is their duty, to throw off such government, and to provide new guards for their future security.

As the United States’ government continues to grow, has it also abused our fundamental natural rights over a long period of time?

Would Americans today sign such a document, under similar threats as the founders?

“A general dissolution of principles and manners will more surely overthrow the liberties of America than the whole force of the common enemy. While the people are virtuous they cannot be subdued; but when once they lose their virtue then will be ready to surrender their liberties to the first external or internal invader.” — Samuel Adams, 1779, a delegate to the Continental Congress, and signer of the Declaration of Independence