Chino Hills will be waving bye-bye to the 200 foot electrical transmission towers erected near homes, schools and churches in the lovely bedroom community. 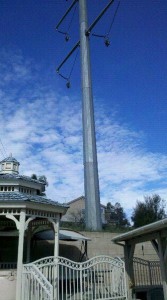 Yesterday the Southern California city won a long and arduous battle against utility giant Southern California Edison. A group of dedicated, committed and faithful citizens proved that the voting public still has a voice, but only as long as it is willing to put forth the effort.

Hope for the Hills, the group of Chino Hills residents created to officially fight SCE on the Tehachapi transmission towers project, demonstrated amazing strength in its battle to win back their rights and their neighborhoods.

A couple of years ago, residents of Chino Hills came home from work one day to find monster 200-foot electrical towers suddenly being erected inside parks and only feet from homes and area churches. Outraged, knowing this would never happen in Malibu, Beverly Hills or San Francisco’s Pacific Heights neighborhood, a small group made immediate phone calls and did some initial research. They found it was SCE’s Tehachapi Renewable Transmission Project, which would construct renewable energy generators from Kern County to western San Bernardino County. The project has been funded by the American Recovery and Reinvestment Act of 2009, also known as President Obama’s “stimulus money” for “shovel-ready” projects.

In October 2010, SCE contractors began removing old, 200-kilovolt (kV) transmission lines which had been idle for several decades, and installing new, beefier, taller, 500 kV transmission lines. By May 2011, new towers were being erected. The old towers had been located on an easement, and had not been used in 40 years. SCE had assured developers that the old electrical towers were only still there as backup electricity in an emergency.

But suddenly the old towers were removed, and new, much larger towers were rapidly being installed — right in the backyards of some Chino Hills residents.

Today’s big win didn’t happen overnight, or without unbelievable organization, commitment and faith by Chino Hills residents. The Hope for the Hills website has hundreds of photos showing the devastation to the city because of the monster towers already erected.

Together with the City of Chino Hills, the residents proposed various alternate routes that would move the transmission lines away from residential communities and schools into a local state park area.

The city spent $2.4 million on experts, lawyers and specialty engineers to fight SCE to develop an alternate route through the Chino Hills State Park, a plan blessed by environmentalists.

The alternate route plan was initially rebuffed by the CPUC. But in November 2011, Chino Hills received word that the CPUC had ordered SCE to halt work on the project, and to come up with alternate route proposals by January 10, 2012. This came after the Chino Hills City Council voted to file a request with the California Supreme Court to accept review of the Court of Appeal’s ruling against Chino Hills.

There’s hope in them thar hills

In fall 2012, I traveled to Chino Hills to see the towers for myself. I was shocked at what this residential community was being told they had to live with. That’s when I took the pictures in this story. 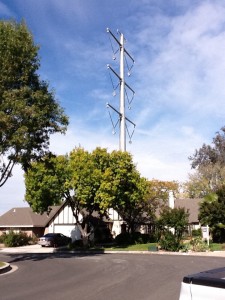 He told me Chino Hills was a city people wanted to live in. “Homes were still in demand, even under the current economic downturn. Prices in Chino Hills remained fairly stable. But now we have the monster poles adjacent to our schools, churches and in parks.”

Goodwin said that the number of homes for sale in Chino Hills jumped 400 percent once the towers began to sprout up.

“The Decision, approved by a 3-2 vote, states that the burden imposed on Chino Hills by the overhead lines is unfair and contrary to community values,” the City of Chino Hills posted on its website today. “Accordingly, the Decision orders removal of the towers already built in the 3.5 mile section of the TRTP right of way in Chino Hills and orders Southern California Edison to complete the project by constructing a single circuit, two cable per phase underground XLPE cable in place of the overhead lines.”

Back when I first learned of the towers, the more I researched the SCE project, the more it became obvious it was a product of the passage of the California Renewable Portfolio Standard by the state Legislature. It then was signed into law by Gov. Jerry Brown.

The 2011 CRPS mandated that 33 percent of electricity generated in the state by 2020 must be from renewable energy.

That means sellers of electricity must procure 33 percent of their total energy supplies from certified renewable resources.

This project was one way to capture federal stimulus money while looking like heroes to the environmentalist crowd by promoting renewables. (Although some environmentalists objected to the power lines themselves.) 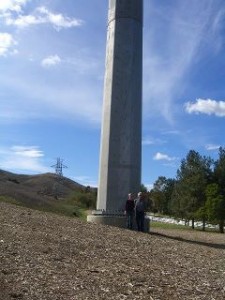 The game is to grab as many federal dollars as possible, regardless of what strings come attached to them. This explained the speed with which the towers went up. It was largely due to having to spend the federal money by a certain deadline, regardless of the pending legal battles.

It was obvious that SCE circumvented many procedures to get the electrical towers project going so quickly. They were even shut down at one point by OSHA for safety violations, and the by Federal Aviation Administration for airspace infringement because of the height of the tall towers.

Today, the Hope for the Hills website message says, “Together we made a difference.”

The Alternate Proposed Decision the CPUC voted on today is available HERE.

Read my main story on Chino Hills HERE, and a full listing of CalWatchdog.com stories HERE.