Two Republicans in the California State Legislature are now voting for legislation sponsored by the state’s construction unions, following several years of unified, principled caucus resistance to such schemes. One might think that former Republican legislators Brett Granlund, Anthony Pescetti, and Ken Maddox are back from term-limited exile, in disguise.

Union leaders and lobbyists are thrilled! They can now label their costly, self-serving bills as “bipartisan” while labeling their more principled critics as “extremist.”

Most prominent among the union-backed bills with Republican support is Senate Bill 7. This bill would withhold state funding for any of the state’s 121 charter cities that exercise their right under the state constitution to set their own government-mandated wage rate policies for purely municipal construction.

SB 7 undermines the principle of local control over local funds and the fundamental structure of constitutional federalism. It also punishes fiscally responsible cities that recognize how state-mandated “prevailing wages” fail to reflect actual market conditions in their communities.

Darrell Steinberg, the Democrat leader in the State Senate, introduced SB 7 on behalf of the State Building and Construction Trades Council of California. That alone should be enough to repel any Republican legislator.

But Senator Anthony Cannella (R-Ceres) joined Steinberg as a coauthor. He even announced his co-authorship of SB 7 via the California Senate Republican Caucus press operation. 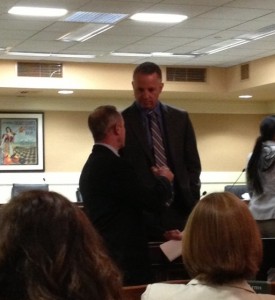 Senator Anthony Cannella confers with the head of the State Building Trades before August 14, 2013 hearing on Senate Bill 7.

Obviously Senator Cannella has never compared the original version of the Davis-Bacon Act to the costly, burdensome mess that comprises California prevailing wage laws in 2013. His defense of Senate Bill 7 by pointing out that Republicans supported the original Davis-Bacon Act is like a Republican defending the federal tax code in 2013 by pointing out that some Republicans supported the Sixteenth Amendment to the U.S. Constitution.

One Renegade Republican Provides Unions with Powerful Ammunition to Use Elsewhere

Pressure for “bipartisanship” on this issue is filtering down to California local governments. On July 30, the San Diego City Council voted 5-4 on party-lines (Democrats in support, Republicans in opposition) for Mayor Bob Filner’s proposal to require construction companies on city contracts to pay state prevailing wage rates. Supporters of the ordinance criticized the four Republicans for not joining the state legislature’s bipartisan bandwagon for imposing state-mandated wage rates.

Notice in this Twitter exchange how Democrat Assemblywoman Lorena Gonzalez – former head of the San Diego-Imperial Counties Labor Council, AFL-CIO – shrewdly tries to latch onto the bipartisan argument to make Republicans on the San Diego City Council look like extremists:

In case anyone was wondering…prevailing wage is not a bipartisan issue.

.@LorenaSGonzalez Based on the numbers, you therefore must consider abortion rights & gay marriage to be bipartisan, right? @stephenpuetz

Senator Cannella is not the only Republican who supports Senate Bill 7. Assemblyman Jeff Gorell (R- Camarillo) voted for it, which didn’t surprise anyone who knows about Gorell’s promotion of the construction union political agenda in his own district. In January 2012, Gorell sent a letter – obviously influenced by construction unions – to the Ventura County Board of Supervisors urging them to require construction companies to sign a Project Labor Agreement with unions as a condition of working on the new Ventura County Medical Center. The letter failed: the board did not mandate contractors to sign a Project Labor Agreement in the end.

A Bipartisan Attack on Diversity in Third-Party Labor Compliance Monitoring

Gorell also joined Senator Cannella in voting for Senate Bill 776, another bill sponsored by the State Building and Construction Trades Council of California. This bill prohibits contractors from taking credit against the state “prevailing wage” rate for payments to labor compliance programs that are not affiliated with a labor union. Union programs are left untouched.

Union leaders were motivated to ask Senator Ellen Corbett (D-San Leandro) to introduce SB 776 by their distaste for a specific independent labor compliance program called California Construction Compliance Group. This program reports completion of 231 audits on public works projects and recovery of over $400,000 for 134 workers.

Its mistake was investigating both non-union and union contractors on public works projects. It reported violations to the California Division of Labor Standards and Enforcement committed by contractors that signed Project Labor Agreements with unions at the Los Angeles Unified School District, the City of Milpitas, and Contra Costa County. This undermined the union argument – affirmed in various places in California law – that Project Labor Agreements eliminate the need for labor compliance monitoring and enforcement. Union leaders are greatly annoyed by this, and apparently Senator Anthony Cannella and Assemblyman Jeff Gorell are annoyed too.

What Can You Do to Discourage This Unjustified and Absurd Kind of “Bipartisanship?”

Here are five tips for Republicans who believe in free markets, fiscal responsibility, and limited government to respond to temptations to support the costly, intrusive union political agenda.

1. Internal Party Enforcement: Leaders of the Republican Caucus in the Senate and Assembly are either not effective in unifying their sub-minority or not trying to do so. Perhaps there is an element of campaign strategy for 2014, when Republicans will try to get one-third control of each legislative chamber. But can anyone list any recent examples of California unions holding back from supporting a Democrat against a Republican in a competitive state legislative election? Trying to ward off union campaign involvement by voting for the union legislative agenda is a futile strategy for Republicans.

Prevailing wage is an unusual issue right now. Unions and their political allies have adopted a strategy to divide the Republican Party in California by pressing some Republicans to support the union position in a fashionable “bipartisan” way. Doesn’t bipartisanship sound nice? In this specific case, resolutions of state and county Republican organizations in certain legislative districts or for certain local governments might help to counteract the union public relations campaign.

2. Don’t Accept Excuses: Congressman Paul Ryan and Senator Anthony Cannella have been excused for their votes in support of the construction trade union political agenda because their families own construction companies with unionized employees. People empathize with their personal motivation to eliminate the competitive disadvantage of unionized companies in bidding – disadvantages caused in part by terms and conditions in collective bargaining agreements. And their familiarity with the construction industry seems to provide extra credibility for their support of more government intervention in that industry.

One could argue in response that these companies choose to be bound to collective bargaining agreements. The National Labor Relations Act (NLRA) includes an exemption that allows a construction industry employer to unionize without consent of the employees, and in practice this is how most construction companies are unionized. Unions claim that companies benefit when workers are represented by a union. Why should Republicans allow the government to distort and mandate wage rates to eliminate the competitive disadvantage inherent for companies that voluntarily choose union representation for their workforce? 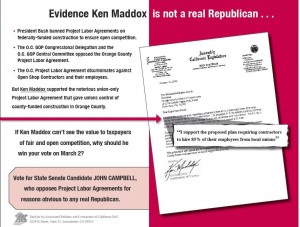 3. Make Republicans Accountable to Voters for Union Sycophancy: In 2000, Assemblyman Ken Maddox wrote a letter to the Orange County Board of Supervisors in support of a proposed policy to require contractors on county construction projects to sign a Project Labor Agreement with unions. He subsequently courted unions with votes and speeches leading up to a 2004 Republican primary for a solidly Republican open State Senate seat. A mailer sent to Republican voters reminded them that Assemblyman Maddox went against federal, state, and local Republican Party organizations and other Republican elected officials to support the union Project Labor Agreement. He lost the primary.

4. Trust Your Political Instincts: Experienced political operatives and activists will recognize typical warning signs that a Republican elected official is swinging to the Left:

Remember that politicians have the same insecurities and inconsistencies as the rest of us. Remind elected officials to be cautious about making decisions about other people’s money based on emotional responses. Civic decisions must be grounded on constitutional principles and a keen awareness of the tyrannical potential of government.

5. Point Out Double Standards: Unions and their political allies celebrate bipartisan cooperation when Republicans join the quest for bigger government. When Democrats get bipartisan in the state legislature, they lose committee leadership positions and even show up at their offices to find their locks changed.