Yesterday I wrote about the hypocrisy of liberal Democrats who speak about gender equality and breaking the glass ceiling. Apparently, the supposed party of tolerance, diversity, and equality only applies if you’re a Democratic male. 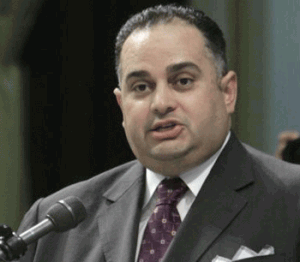 Maturity is not s strong suit for Speaker John Perez

For the Speaker, if you’re a successful Latino in your field and he disagrees with your point of you, he will not tolerate even sitting on the same panel.

This weekend the National Association of Hispanic Journalists met in Anaheim for their Excellence in Journalism 2013 conference. Their association’s mission states dedication to fostering and promoting a fair treatment of Hispanics by the media. Their conference took an unexpected turn of events when Speaker John Perez demanded that political strategist Hector Barajas’ voice be silent and demanded the National Hispanic Journalist Association remove him from a Latino Vote panel where Hector had been invited to speak and represent the GOP voice. The journalist association shamelessly agreed to the Speaker’s demand.

The Speaker, sitting on the panel along with three other Democrats, could not tolerate Hector Barajas’ point of view. Imagine the uproar if four Republicans attempted to shut out a Democrat at a panel hosted by journalists.

The Speaker himself called Assemblyman Rocky Chavez and invited him to join the panel.  Apparently, the Speaker now dictates to Hispanic journalists who can and cannot speak about Latinos.

How could Latinos believe they are being presented with balanced news when journalists let themselves be dictated regarding who can speak and who cannot?

For the past 16 years Hector has been a leading Latino voice in the Republican Party, as a volunteer coordinator, campaign manager, deputy political director and communications director for the California Republican Party, as well as a national spokesman and leading political analyst for various Spanish language media groups; most recently as the former communications director for the Senate Republican Caucus in California and a founder of GROW Elect, a program dedicated to electing Latinos to local office.

For Republicans in California and across this country, Hector is expert in Latino issues and voter demographics.

It’s unbelievable the hypocrisy and intolerance by the Speaker in his inability to tolerate other people’s diverse opinions, and the National Association of Hispanic Journalists for kneeling down to political pressure during their own conference.  Perez continues to exhibit a lack of maturity that is unbecoming someone in such an important office of public trust

The ultimate victims in this situation were the participants of the conference who could have had an opportunity to hear and learn from one of our leading experts in Latino politics.

If you have not seen it, ace-San Francisco Chronicle political reporter Carla Marinucci also wrote about this incident.