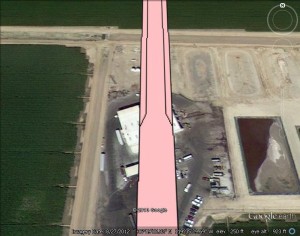 Baker Commodities is directly in the proposed path of the California High-Speed Rail line.

I reported on the impending demolition of the only dairy cow carcass rendering plant in Kings County in my June 4, 2013 www.FlashReport.org article Two Gifts for the Planet: Build California High-Speed Rail and Choose a Path that Crushes the Dairy Industry.

Someone at the California High-Speed Rail Authority should be given the nickname Annie Oakley, because the planned eastern route through Kings County for the “Safe, Reliable High-Speed Passenger Train for the 21st Century” shoots with pinpoint accuracy through the middle of a pivotal agricultural facility. It just so happens that the business of this facility offends certain 21st Century enlightened sensibilities. (It’s where dead cows go in the process of becoming consumer products.)

But small business owners in industrial areas of the City of Fresno are getting the boot first. Not surprisingly, some of these businesses also engage in activities offensive to certain 21st Century enlightened sensibilities. 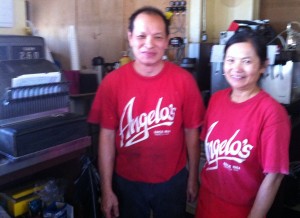 Owners of Angelo's Drive-In in Fresno

An article in the August 19, 2013 Los Angeles Times (Angelo’s Owners Set to Take Revised Offer, Make Way for Rail Line) reported on how the California High-Speed Rail Authority is liberating a bewildered Cambodian immigrant couple (Ken Chea and Kay Lim) from their small Fresno burger joint, Angelo’s Drive-In. Opened in 1954, this restaurant evokes nostalgia for an era in the Central Valley depicted in the film American Graffiti. The owners even use the original cash register. Since buying the restaurant several years ago, the owners have kept a regular, working class clientele.

The state has offered them an amount for Angelo’s Drive-In they feel is too low and is insufficient to reopen elsewhere in Fresno. Especially galling for the family is the state’s assessment of $1000 against their property value for them to take their vintage neon sign. 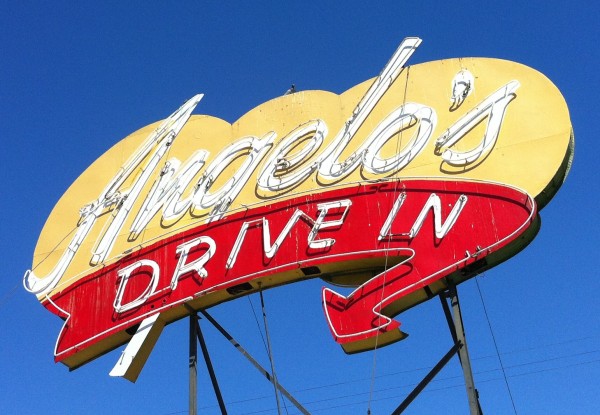 Note that Angelo’s Drive-In is not charming to everyone. A few supporters of California High-Speed Rail posted unsympathetic comments under news articles describing this government property grab. Apparently the food and drinks served at Angelo’s Drive-In compromise public health in Fresno and therefore impede Progress. 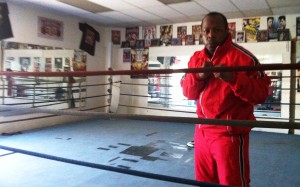 A few blocks away, Al Lopez, the owner of a T-shirt print shop and a boxing gym, is going to lose both of his businesses when his building is demolished to make way for the bullet train. Like the owner of Angelo’s Drive-In, the owner of Main Event Graphics and Main Event Boxing claims that the California High-Speed Rail Authority is assessing property values based on 2010 figures. He will be unable to afford to reopen his businesses elsewhere in Fresno.

Once again, people with certain 21st Century enlightened sensibilities probably aren’t too concerned that neighborhood kids won’t have a place to learn a pugilistic sport or that a manufacturer of custom T-shirts is going out of business. These are the kind of small businesses that are moving to Texas and clearing the way for a better future for California. If all goes well, a transit village will take their place, humming with the intellectual energy of the creative class and serving as a new beacon of Progress halfway between San Francisco and Los Angeles.

There is more at issue than just these specific businesses. On a more abstract level, certain 21st Century enlightened sensibilities include the assertion that Americans have an unjustified and misguided “fetishization” of small businesses such as the ones targeted for oblivion by California High-Speed Rail. Such thinking includes some valid questions:

Regardless of how someone answers these questions, the process of land acquisition by the California High-Speed Rail Authority should concern everyone. It has some uncomfortable similarities to how the People’s Republic of China relocates people and demolishes homes and small businesses to build massive infrastructure projects under its system of “State Capitalism.” Some California leaders think highly of the Chinese plans and initiatives to advance society with ambitious public works projects – see Governor Jerry Brown Praises Chinese for Bullet Train. 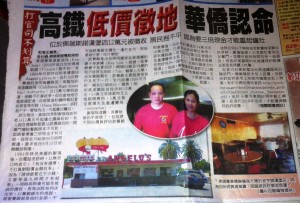 There are suspicions that the California High-Speed Rail Authority’s selection of Cambodian immigrants as an early property acquisition target was not random. State Senator Leland Yee visited Angelo’s Drive-In to investigate the matter. The Chinese Daily News in Los Angeles reported on the property acquisition as well.

Behind closed doors, some community leaders in the San Joaquin Valley suggest that language barriers and cultural differences in how negotiations are conducted made the owners of Angelo’s Drive-In vulnerable to falling for a quick and undesirable settlement.

It’s understandable that the California High-Speed Rail Authority is intent on getting property fast and demolishing the existing buildings. It needs to show dramatic visible progress on a struggling and highly-criticized project. On August 16, 2013, a Sacramento County Superior Court judge ruled in Tos, Fukada, and County of Kings v. California High-Speed Rail Authority that “the Authority abused its discretion by approving a funding plan that did not comply with the requirements” of law approved by voters in November 2008 as Proposition 1A and implemented as California Streets and Highway Code Section 2704.09.

On August 26, 2013, Governor Brown signed Assembly Bill 481, which allows the California High-Speed Rail Authority to manage its own property without oversight from other agencies. It is now also authorized to sell land it buys for high-speed rail operations but will not need in the end, as implemented by California Public Utilities Code Section 185040(a):

Your government is picking winners and losers and clearing the way for the 21st Century High-Speed Rail vision of billionaires, hipsters, and politicians. Ordinary small business owners in the path of the train have not yet organized to fight back. Is this Progress?

Why Californians Need to Scrutinize Property Acquisitions, Relocations, and Demolitions for High-Speed Rail

China Shifts on How to Resettle Million People for Giant Dam – New York Times – May 25, 1999