I support Kirk Jorgensen for Congress for a couple of reasons. First, Kirk has demonstrated great character and great integrity in service to his country. He laid it on the line for America. As a Marine Corps Officer, Kirk led combat intelligence teams that rescued our prisoners of war out of Saddam Hussein’s Iraq. Kirk’s unique leadership experience gives him a perspective and understanding of national security and foreign policy that Congress needs. 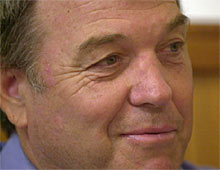 Secondly, Kirk is qualified in ways that no other Republican or Democrat in this congressional race is. This is no time for on the job training. Our country is at war. New emerging threats and concerns are on the horizon, like Iran, North Korea, and Syria. We need leaders who are qualified to make the tough decisions now—leaders who know what it is to be courageous under pressure. Kirk Jorgensen is exactly that kind of leader.

Kirk hunted war criminals—terrible people who committed genocide by killing their own citizens in Bosnia. When elected, Kirk will be the only member of Congress who has been a CIA Case Officer. These are highly trained men and women who conduct human intelligence on the front lines all around the world. Kirk, and experts like him, have gathered and provided our decision-makers and the President with the intelligence they need to make the best decisions. Not too many candidates have that kind of professional experience.

Also, Kirk has a great intellect that he has invested in others. He came home and worked as a technology and intelligence consultant. He trained cultural experts assigned to Navy SEAL Teams and began building toward our next generation of leaders. Real service is about giving it all and giving back. Kirk has done that.

And finally, Kirk is a committed family man who cares about his community. Kirk understands that the world we live in is a threatening place sometimes. Kirk wants to leave a safe and prosperous America for his children and grandchildren, and he knows how to do it. Kirk will make sure we have the forces we need and keep military jobs in San Diego County.

Kirk is perfect for the 52nd Congressional District, and that is why I am proud to endorse Kirk Jorgensen for the United States Congress.