Do union activists work for Gov. Brown, farm board?

SACRAMENTO — The revolving door among political consultants, community organizers and state government revolves right into the governor’s office and the Agriculture Labor Relations Board. 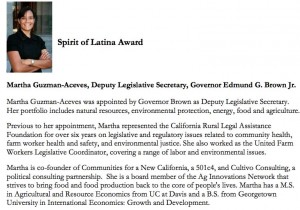 In 2011, Gov. Jerry Brown appointed Martha Guzman-Aceves deputy legislative secretary for agriculture, environment and natural resources. Before that, she was a founding partner of Cultivo Consulting, which says it engages in lobbying, political campaigning and community organizing in California. It’s a lobbying and outreach firm specializing in social, economic and environmental justice.

She also was listed on 2011 tax returns (pictured nearby) as president and CEO for Communities for the New California Education Fund, a 501(c)(3) organization “committed to achieving environmental, economic, and socially just public policy for working class families in the rural areas of California.”

Her biography says she “previously served as the Legislative Coordinator for the United Farm Workers (UFW) AFL-CIO covering a range of labor and environmental issues. She worked for the UFW for five years in both their political and research departments.” 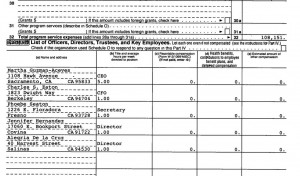 Alegria De La Cruz was appointed by Brown on Dec. 13, 2011 as Regional Director for the Agricultural Labor Relations Board. She was Guzman-Aceves’ partner in the CNC Education Fund. She previously worked for the Center on Race, Poverty and the Environment as a staff attorney. Prior to the center, De La Cruz worked for the California Rural Legal Assistance Foundation as a staff attorney.

I spent four hours earlier this month with nearly 700 farm workers protesting the state forcing them to join the United Farm Workers union. They made an appeal to the governor at his office.

Silvia Lopez, leader of the farm workers’ group, thought Brown invited her and five other farm workers to meet with him. Instead, Brown sent them Guzman-Aceves, who as noted above was a former UFW official. 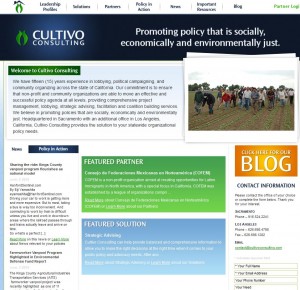 At the end of the meeting, Guzman-Aceves offered to contact Silas Shawver, the Visalia representative for the Agricultural Labor Relations Board. This frustrated and angered the farm workers. They said Shawver has been instrumental in forcing the UFW on them. Guzman-Aceves offered no other help.

Shawver used to be an attorney with California Rural Legal Assistance. Guzman-Aceves also worked for CRLA, as did her associate, Alegria De La Cruz. So did Jennifer Hernandez, Guzman-Aceves’ partner in Cultivo Consulting.

Shawver is godfather to De La Cruz’s child, according to a story on the Western Growers website. And Shawver worked with De La Cruz at the CLRA as staff counsel, specializing in wage claims against agricultural employers. Shawver now works for the ALRB as Regional Director in Visalia.

After the meeting with Guzman-Aceves in the governor’s office, the farm workers told me they felt they’d been railroaded. Silvia Lopez said, “They never planned on listening to us.” 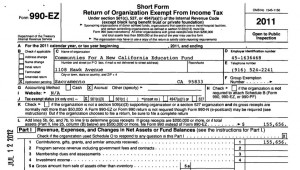 I dug out more information on Guzman-Aceves. Her biography says, “Martha is co-founder of Communities for a New California, a 501(c)(4) [sic], and Cultivo Consulting, a political consulting partnership.”

However, while Guzman-Aceves has served as a public official in the Brown Administration, CNC lobbied the Legislature and governor’s office on various issues, including AB1081, federal immigration policy enforcement. AB1081′s bill analysis shows CNC listed among the supporters.

Communities for a New California 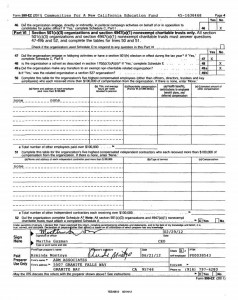 Guzman-Aceves signed the IRS tax return for Communities for a New California Education Fund as CEO on Feb. 29, 2012. Click on the picture at right to see her signature. The full tax return can be seen at this link. But according to the 2011 California Environmental Scorecard of the California League of Conservation Voters, she was appointed “early in his term” in 2011, the prior year, as Brown’s “Deputy Legislative Secretary for Agriculture.”

She used a residential address located in a Sacramento neighborhood on the non-profit IRS form, which is on the Guidestar rating website for CNC.

And someone at the CNC received $14,740 for “travel, meetings and auto” expenses, the IRS tax return reported.

On the IRS form, CNC has a public charity status and checked off the box indicating that it receives a substantial part of its support from the government.

“We have fifteen (15) years [sic] experience in lobbying, political campaigning, and community organizing across the state of California. Our commitment is to ensure that non-profit and community organizations are able to move an effective and successful policy agenda at all levels, providing comprehensive project management, lobbying, strategic advising, facilitation and coalition building services. We believe in promoting policies that are socially, economically and environmentally just. Headquartered in Sacramento with an additional office in Los Angeles, California, Cultivo Consulting provides the solution to your statewide organizational policy needs.”

The bio for Jennifer Hernandez on the website says the firm was started in 2008 and reads:

“Currently Jennifer is a Partner with Cultivo Consulting, a consulting firm started in 2008 aimed at helping nonprofits and community organizations participate in public policy shaping from the local to state levels.”

Hernandez also worked for the California Rural Legal Assistance Foundation, “where she coordinated efforts with the Poder Popular Program, a project funded by the California Endowment.” “Poder Popular para la Salud del Pueblo” means “The Power of the People for the Health of the Community,” and was “a community organization designed to empower agricultural workers.”

The Cultivo website still maintains a web page for Guzman-Aceves – but there is no actual reference to her on the web page. See the nearby picture, which was captured at 8 am on Oct. 11, 2013. Notice the URL in the upper left-hand corner, which includes her name: http://cultivoconsulting.com/leadership/martha_guzman-aceves.html

However, the text of the page reads:

“LEADERSHIP PROFILES
“We’re sorry, but there is an error with your selection.”

A tracer report shows the phone number rings to a cell phone owned by Guzman-Aceves, where a voice mail message recorded by a child says, “Hi. You’ve reached Martha Guzman-Aceves. Please leave her a message.” 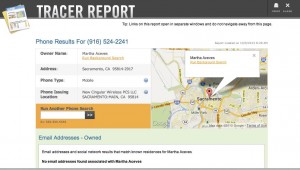 CRLA and community for a new CA connections

Seaton is an attorney with the CLR, and is listed as the Communities for a New California Education Fund, Board of Directors Secretary. Seaton also was listed in a CRLA Annual Report as the Community Equity Initiative Program Director. The CEI’s “goals are to eliminate infrastructure inequity in disadvantaged, unincorporated communities.”

Eaton is a Ph.D. candidate at UC Berkeley. He wrote “Stronger Together in Fresno” in the collection, “In Critical Solidarity,” and “Student Unionism and Sustaining Student Power.” 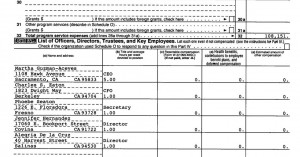