Any fiscal conservative who joins a bipartisan coalition to advance a common cause needs to be wary about becoming one of the Left’s “useful idiots.” A classic example is now unfolding in Sacramento, where sports fans and corporate interests are clamoring for exceptional efforts – including a $258 million public subsidy – to retain the region’s one major league professional sports team, the Kings of the National Basketball Association. 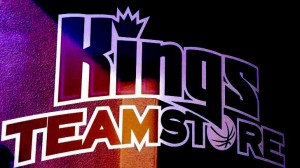 This store is for buying team merchandise, not municipal bonds for arena construction.

Emotionalism and financial self-interest are overwhelming critical thinking about mundane issues such as opportunity costs, municipal debt finance, property rights, regional transportation planning, and the role of government in redistributing capital. And the selected location for the new arena was a strategic error that may send the Kings packing to more lucrative pastures.

Either by design or by default, the new arena is planned for downtown Sacramento, rather than a suburban site or even next to the current arena. As a result, the arena and anticipated development around the arena are being subjected to costly political meddling, led by downtown’s State Senator Darrell Steinberg and his political allies.

Just like the doomed California High-Speed Rail project, the arena is entangled in idealistic schemes that impose significant financial and logistical costs. Progressive community activists recognize the potential of the downtown arena as a social engineering project. They can get away with using the arena as a vehicle to change the world because so many ordinary people and influential business and community leaders seem to want it at any cost.

The New Kings Arena Will Save the Planet from Global Warming

State Senator Darrell Steinberg was the author of a controversial bill (Senate Bill 743) signed by Governor Jerry Brown in October 2013 to ease environmental review under the California Environmental Quality Act (CEQA) for the new arena. The new law requires vehicle miles traveled per attendee for basketball games to be no more than 85% of the miles driven by fans to games at the current Kings arena (Sleep Train Arena) during the 2012-13 season.

This restriction will help “achieve a per attendee reduction in greenhouse gas emissions from automobiles and light trucks that will exceed the carbon reduction targets for 2020 and 2035 achieved in the sustainable communities strategy prepared by the Sacramento Area Council of Governments.” It brings new complications to fans who want to hop in the car after work, drive to a big parking lot, and watch the game. Are Kings season ticket holders in El Dorado Hills and Granite Bay willing to take light rail to get to the games, as if they were taking BART to a Giants baseball game?

To avoid exceeding the 85% threshold, will the Kings need to impose late-season moratoriums on ticket sales to more distant fans from Chico, Stockton, and Truckee? Will the team play its last few games in an empty arena if fans drive too many miles during the season?

Even more absurdly, this requirement discourages driving to games when parking fees are supposed to fund the $258 million public subsidy for the arena. To hit revenue projections, will downtown parking cost $34 per day, as it does at Union Square in San Francisco?

The arena is supposed to make Sacramento a world-class city, and it would become a world-class city, at least in terms of its downtown parking rates. For those not willing to pay those prices, a local organization known as Sacramento Area Bicycle Advocates is working with community leaders to make sure fans can ride their bikes to the games.

It shouldn’t be a surprise that SB 743 includes regional environmental mandates. Senator Steinberg is the author of Senate Bill 375, enacted in 2008, which requires California’s regional planning organizations to develop and adopt a “sustainable communities strategy” to “achieve certain goals for the reduction of greenhouse gas emissions from automobiles and light trucks in a region.” Those goals are greenhouse gas emission reduction targets set by the State Air Resources Board as authorized under Assembly Bill 32, the California Global Warming Solutions Act of 2006.

The New Kings Arena Will Elevate the Collectivist Power of Unionism 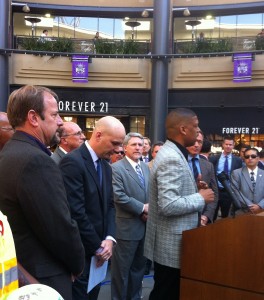 Out of the prying eyes of the skeptical and cynical public, politicians helped to arrange a Project Labor Agreement that contractors must sign with trade unions as a condition of working on arena construction. Announced on September 4, 2013 in an ill-fated press conference arranged by a major national public relations firm, this generous union payoff will likely reduce bid competition and increase costs. While politicians claim this Project Labor Agreement will work wonders for the community, the document itself has never been available to the public. The Sacramento City Council never discussed it or voted on it.

Not everyone on the Left is satisfied. Community organizers cite historical discrimination of Sacramento construction trade unions against minorities and call for a 60% minority participation rate among union apprentices getting on-the-job training on arena construction.

Other costly concessions loom ahead. The Sacramento Central Labor Council and allied groups are demanding a Community Benefit Agreement on the Kings arena and the surrounding development, much like the agreement for the Staples Center and surrounding L.A. Live development in Los Angeles. This agreement will prevent employers from challenging union organizing campaigns for workers at hotels and restaurants and for workers in security and janitorial services. The agreement is likely to include significant lump-sum payments to local social justice and environmental organizations. And yes, it will likely include a Project Labor Agreement.

No one in downtown Sacramento will evade union demands. In the last 90 minutes of the 2013 state legislative session, Democrats tried to slip a union-backed bill (Assembly Bill 852) through the Assembly that would have amended Darrell Steinberg’s Senate Bill 743 – passed with controversy a few hours earlier – to restore full CEQA authority over development surrounding the new proposed Kings Arena. The change would have allowed unions to use an uncompromised CEQA to delay proposed commercial and residential projects until developers, corporations, and small businesses met their demands – a practice sometimes called “greenmail.” Expect this bill to return in 2014.

Extracting money from developers and interfering with corporate employee relations can be satisfying and lucrative for unions and community activists. But how much will it cost?

During the December 11, 2013 meeting of the Sacramento City Council, before a vote to suspend competitive bidding laws for the arena, the Kings team president declared that the new arena will be “the most talked-about building in the world.” (Move over, Eiffel Tower and the Great Pyramids of Giza.) Sacramento leaders tout a technologically-advanced, indoor-outdoor arena designed to serve as “a communal fireplace where people gather.” The arena will be the loudest in the NBA, yet it will be “intimate.”

In addition, Senator Steinberg’s SB 743 requires the arena to attain Leadership in Energy and Environmental Design (LEED) gold certification, even though the original non-binding term sheet approved by the Sacramento City Council in March only indicated LEED certification. This is likely to increase construction costs beyond original expectations.

Will these ambitions cost only $448 million, including a $258 million public subsidy? Everyone wants an exceptional structure, but no one speaks publicly of cost constraints.

What’s Likely to Happen in the End?

Empty field in Rancho Cordova, where the purpose of an arena would be to watch events.

Soon the Kings ownership may need to designate Shaquille “Shaq” O’Neal (who now allegedly owns 3-4% of the Kings) to announce the unpopular news that the public subsidy must now be $350 million for a $600 million arena. Or the owners can sell the team and blame “Sacramento Taxpayers Opposing Pork” (STOP). This group (along with a group called Voters for a Fair Arena Deal) has collected and submitted signatures for a ballot measure in the City of Sacramento requiring voter approval for public subsidies on sports and entertainment facilities.

It’s regrettable that fiscally-responsible political and business leaders in the region didn’t try to avoid these inevitable entanglements. Perhaps they should have proposed a reasonable and fiscally-responsible plan simply to build a larger Sleep Train Arena, surrounded by ample parking, in the suburbs. Instead, they now have to align themselves with leftist political leaders and organizations to secure the Kings arena in a downtown location.

Did suburban leaders hold back from proposing an arena alternative because they saw the Kings as an unwise public and private investment and hoped to evade paying for the arena? They may have miscalculated.

At the December 11, 2013 meeting of the Sacramento City Council, a plot began to emerge to use the Sacramento Area Council of Governments as a vehicle to get regional funding for the arena plan, in particular for providing public transportation. With Sacramento City Councilman (and State Assembly candidate) Steve Cohn selected on December 12 as the 2014 chairman of the SACOG board of directors, expect the plan to move forward, quickly.

Professional basketball is a business. Team owners are investors who don’t want to lose a lot of money. If political meddling persists and fiscal conservatives don’t come forward with a suburban alternative, a move for the Kings out of Sacramento may be inevitable.

March 26, 2013 non-binding term sheet between the City and an investor group in order to retain the Sacramento Kings NBA basketball franchise and to develop a new Entertainment and Sports Center (ESC) in downtown Sacramento 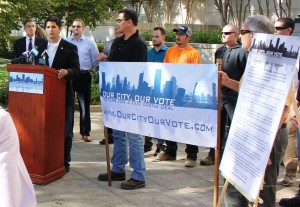 Voters for a Fair Arena Deal