It’s Winnable! Conditions Are Ripe for a Republican to Get Elected in 2014 as California State Treasurer

News media and California Republican Party activists are focused on which Republicans are running for Governor, and rightfully so.

But there is another elected statewide office that invites a campaign based on intellectual and popular arguments in support of fiscal responsibility.

That obscure but influential office is California State Treasurer.

And that office is quite winnable for a libertarian populist-style Republican who can credibly argue to The People against crony capitalism and build a majority coalition of support from voters on the Left and Right.

Why isn’t a smart, dynamic Republican with this kind of thinking jumping into this race? What an opportunity! Below are five winning issues for a Republican candidate for California State Treasurer.

Bonds are free money that comes from President Obama or somewhere, right?

Californians don’t know that state and local “bond measures” on the ballot authorize governments to borrow money from Wall Street and pay it back – with interest. The so-called “One Percent” does not buy municipal bonds to help the kids or save the planet. They buy bonds to make money! They want to TAKE money from The People, not give it.

With interest payments, a $9.95 billion bond measure for California High-Speed Rail actually means an expenditure of $19 billion to $23 billion, if the assumption is correct that bonds would be sold at today’s rates to be paid back over a 30-year period. (And the assumption may be wrong: 35-year bonds were authorized in March 2013.)

And explaining that bonds are like a mortgage does not always work with the public. Many California voters do not have mortgages and don’t really understand them. (Refer instead to credit cards, or even payday loans when talking about Capital Appreciation Bonds.)

Do voters know that clever lawyers and political consultants have figured out how to get taxpayers to pay for polls and voter research to maximize the success of a campaign for a bond measure? Do voters know about the aggressive marketing to school boards and administrators to put bond measures on the ballot? Do voters know the identities of the biggest donors to campaigns to pass bond measures? (That in itself is a scandal.)

There’s a racket out there that virtually no one recognizes, and The People are the suckers. Californians make an uninformed emotional decision in five seconds to vote for a bond measure because they care about the children or the planet. That can trigger a 40-year debt commitment!

The California State Treasurer has the capability and the credibility to expose these hidden issues to The People. Even in the case of school district bond measures, the California State Treasurer has an interest, because the State Allocation Board matches district spending with money borrowed through three statewide school construction bond measures totaling $35.8 billion. (Remember those old bond measures? Wall Street hasn’t – they want their money back, with interest.)

2.      Give Californians an Accurate Idea of State and Local Government Debt

Do any Californians know how much money their state government and all of their local governments owe to Wall Street for money that voters authorized to borrow through bond sales? People would be stunned to find out the numbers. You may own property or rent property in wacky finance districts that owe hundreds of millions of dollars – there’s a lot of creative stuff going on nowadays to fund things. People who pay property taxes can look at their statements from the county treasurer to see which governments are taking their money to pay off bond debt. Everyone else pays indirectly for these taxes without knowing how much, where, or why.

Public debt obligations must be recognized and understood. A general rule of thumb needs to be followed by California state and local elected and appointed officials: if you’re asked at lunch to diagram on a paper napkin how something is funded, and you can’t do it, you shouldn’t be using that tricky method of finance. (Who can diagram the funding plans for any of these proposed projects: California High-Speed Rail, the new Sacramento Kings arena, or the San Diego Convention Center Phase 3 expansion?)

3.      Ensure that Money Borrowed Via Bond Sales Is Used for Its Intended Purpose

Shareholders of Apple, Inc. are very happy. The Los Angeles Unified School District and San Diego Unified School District are buying iPads using money borrowed from Wall Street through bond sales. Voters thought that district money was going to school construction, but apparently they didn’t read the fine print in Proposition 39 when 53.4% of California voters approved it in 2000. So instead, they get to buy electronic tablets for a few years of use but then pay from them – with interest – over 30, 35, or even 40 years. Even the United Teachers of Los Angeles (UTLA) union sees this as ridiculous.

The California State Treasurer can also improve accountability as a sitting “ex officio” member of the boards of the huge California public employee pension programs CalPERS and CalSTRS. CalPERS is reportedly the nation’s largest public pension fund with assets totaling $277.2 billion as of October 31, 2013. A honey pot like that is a sweet target.

Instead of encouraging foolish investment practices based on “social responsibility,” leftist political causes, or cronyism, the State Treasurer can alert the public about them. Remember how Phil Angelides tried to increase the focus of these investment funds on social causes when he was California State Treasurer from 1998 to 2006? Controlling someone else’s money brings powerful temptations to be an agent to change the world, thus earning admiration from your peers and self-righteousness for your next campaign. Checks and balances are needed.

4.      Stop Local Governments from Putting Our Children and Grandchildren Under Crushing Debt with Capital Appreciation Bonds 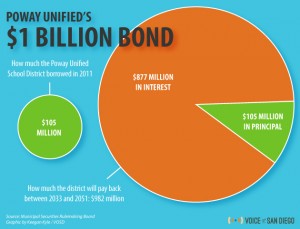 I get it now: the Voice of San Diego graphic about Capital Appreciation Bonds that caught the attention of Californians.

A few parties in California (such as the Office of the Los Angeles County Treasurer and Tax Collector and the California League of Bond Oversight Committees) sounded early warnings that Capital Appreciation Bonds were a potential disaster. In my opinion, the public became aware of the problem only because the Voice of San Diego used some simple colorful graphics to show the plight of future taxpayers in the Poway Unified School District. (Voice of San Diego should have won a Pulitzer for that reporting and associated graphics.)

The California State Treasurer has the capability and the credibility to expose this to The People, but those warnings need to come through colorful graphics and YouTube videos, not incomprehensible and boring reports. The Treasurer needs a great graphic artist who believes in fiscal responsibility.

Rid the Office of the California State Treasurer of euphemisms, please! The word “investment” should never appear in a report from the California State Treasurer. To be blunt, the Government is using its coercive statutory power to take money from people or borrow money from people for the Government to spend on programs and projects.

Nothing is free: The People must pay for Government, either directly through taxes or indirectly through prices for goods and services. Perhaps the People’s Republic of China is paying for our free stuff now, but The People will be paying it back – with interest. Let’s be honest about it.

Where Is This Ideal Republican Candidate?

If you are concerned about the incredible debt that voters are unwittingly loading on future generations – for many Californians, their own children and grandchildren – it’s time to recruit a dynamic, intelligent candidate for California State Treasurer who will come out swinging for economic and personal freedom from self-inflicted debt slavery to financial institutions. This is not a time for a mild placeholder assigned by the California Republican Party. The issues are clear, the need is great.

A Preliminary Timeline of Activity Concerning What Will Be $9.95 Billion Borrowed through Proposition 1A Bond Sales for California High-Speed Rail

Moody’s Suggests Greedy Taxpayers Clinging to Their Money and Too Much Local Government Authority Are Causes of Municipal Bankruptcies; Predict More to Come