The Case Of Rod Wright — The State Senate At The Crossroads 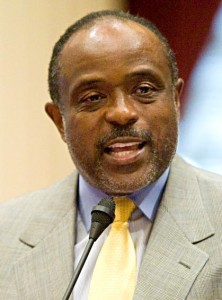 State Senator Rod Wright was convicted of eight felonies nearly a month ago.

This coming Friday State Senator Rod Wright will be celebrating an anniversary of sorts — he will be celebrating the end of his first month serving in the California legislature while simultaneous being a convicted felon.  On January 28th Wright was found guilty in Superior Court of eight felonies.  A jury of Wright’s peers found that he had committed perjury and fraudulent voting, after Los Angeles County District Attorney prosecutors successfully made the case that Wright did not, in fact, reside in the Senate District in which he ran.  Wright will be formally sentenced in May, but based on the crimes for which he was convicted he could face up to eight years and four months in prison.

Following his conviction, Wright did not resign his seat in the State Senator.  On the contrary, within 48 hours the now-convicted Senator was introducing self-serving legislation that would allow some convicted felons, like himself, to later have their felony convictions reduced to misdemeanors.

With the exception of being relieved of a committee chairmanship (but not his committee memberships), Senator Wright has enjoyed a post-conviction life in the Capitol that, frankly, largely has resembled his pre-conviction life.  He has enjoyed his government salary and per diem payments, a large staff, and cruising around the Capitol City in his taxpayer provided sedan.  He has no doubt enjoyed third-house representatives having to take his calls and meetings, pleading(no doubt with success) for additional contributions to his legal defense fund.

Can anyone really blame Rod Wright for wanting to maintain all of these trappings, and his office of public trust?  It is human nature to act in one’s own best interest.  Although Rod Wright is not the first State Senator to be convicted of a crime — Joseph Montoya back in 1990 and Frank Hill back in 1994 immediately come to mind.  But Hill and Montoya both resigned from the Senate.

Yesterday Senator Wright announced that he had decided that he would take a self-imposed indefinite leave of absence.  Wright clearly made a calculated decision that because of the lengthy and serious charges filed against his colleague, Senator Ron Calderon, last Friday — and the subsequent and speedy announcement by Senate President Darrell Steinberg that if Calderon did not resign that the Senate would “suspend” him — that he’d best make a preemptive move to make sure he could alleviate pressure on his colleagues to take action against him!

If you want to look to why Rod Wright is still serving as a State Senator, look no further than the support he is receiving from his colleagues, and the relatively low profile scrutiny coming from the media.  These are in stark contrast to the situations with Senators Montoya and Hill.  The former was given an ultimatum by the Senate Rules Committee to resign or be removed, and the latter’s resignation was demanded by a vote of the Senate Ethics Committee.  A look back at the vast and extensive media coverage — television, newspapers, radio — that surrounded the convictions of Montoya and Hill, clearly made it difficult for Senators back then to do what 34 Senators are doing now — which is, in essence, turning a blind eye to the convicted colleague in their midst.

To be clear, leading the non-effort to remove Wright are his Democratic colleagues.  After Wright’s conviction their leader, President Pro-Tem Darrell Steinberg gathered his fellow Democrats in a private caucus and after this meeting it was announced that no action would be taken against Wright until his formal sentencing took place — at the time that was to be in March, and since then the sentencing date has been pushed back into May.  Steinberg argues that is is possible that the trial judge could, in fact, set aside the verdict, and thus it would be inappropriate to take the permanent and irrevocable action of removing Wright.  While I am no expert on the intricacies of the legal justice system, it wasn’t very hard for me to call a few people who are — and let’s just say that it is more likely that it will rain for 40 days and 40 nights and end our drought than it is that Wright’s convictions will be overturned in May. 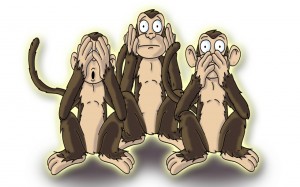 I wish that I could simply lay the coddling of Rod Wright on his Democratic colleagues.  The reality is that Senate Republican Leader Bob Huff has also publicly defended Wright’s continued service in the Senate.  Behind him a majority of Senate Republicans have been, along with the Senate Democrats, quiet on the issue, doing their best tribute to the three proverbial monkeys, “see no evil, hear no evil, speak no evil.”

That said, four Republican Senators have called for an immediate vote on removing Wright.  Senators Joel Anderson, Steve Knight  Andy Vidak and Mark Wyland have all called on Darrell Steinberg to have a vote of the Senate — a request that has thus far fallen on extremely deaf ears.

It’s hard to talk to anyone in Sacramento who doesn’t have nice things to say about Rod Wright.  He enjoys broad personal support from all quarters.  Wright, says many, is that kind of legislator who listens to his colleagues, exudes respect for them, cares deeply about public policy, and has a reputation for being a Democratic maverick in a town where most D’s are either liberal ideologues or are wholly owned property of the state’s influential public employee unions.  Wright is known for being a smooth-talker, and quite articulate.  So no doubt he has used all of his skills in this regard to work over his colleagues and mollify any of their instinctual concerns.

Add to this that there seems to be a feeling among many Senators that Rod Wright got a “raw deal” — that the state’s law that requires a legislator to live in their district is somehow ambiguous (it apparently uses the word “domicile” rather than “reside” — or something like that).  Apparently there is a time-honored tradition in the California legislature of Senators and Assemblymembers not actually living in the districts they represent.  Some examples are quite startling — a Sacramento Bee investigation into the residency (or lack thereof) of Assemblyman Richard Pan comes immediately to mind.  I have heard complaints that it isn’t fair that Wright was charged and convicted for not living in his district when so many others are doing the same thing.

Cutting through all of the arguments about what a great guy Rod Wright is, or how they don’t like the way the law reads — is the immutable fact that despite the personal opinions of many of Wright’s Senate colleagues — Wright had his day in court.  And after a lengthy trial, the jury (after being instructed by the judge on the law as it is written) with a very high burden of proof required — guilt beyond any reasonable doubt — handed down conviction after conviction.

So the question now is one of respect for the law, and whether or not the State Senate, as an institution, is above the law.  If a group of State Senators has the ability to decide which laws they believe are “good laws” and which ones are “bad laws” — with the idea that you shouldn’t be held accountable if you break the former — then what message does that send to all Californians?  Does it mean that we all get to decide which laws we want to follow and which ones we want to ignore?  I can probably devote a year of columns to laws on the books in California that I would like to see repealed.  But does that mean that I contemplate whether or not I am subject to those laws?

Rod Wright wants to take a leave of absence, continue to hold his high office, and continue to take a government paycheck for an indeterminate period of time.   If he is allowed to do this — if he is permitted to continue to be the longest serving convict in the State Senate… Then his personal victory comes at a very terrible price.  State Senators should seriously consider whether the rule of law matters, and whether they feel that those who create laws should have to abide by them.  The Senate is at the crossroads.