Did Senator Anderson’s Stance In Support of Expelling Rod Wright Cost Him A Key Vice-Chairmanship? 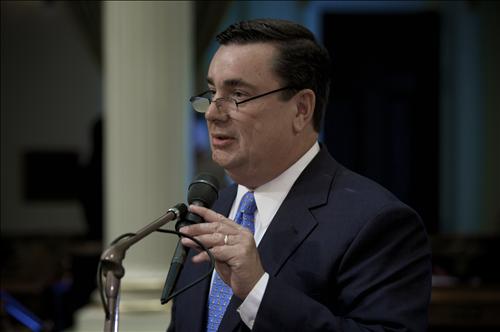 Apparently there is a price to pay for being willing to stand tall on the Senate Floor for the rule of law.  FR readers will recall that recently Anderson was the only vote in the legislature’s upper chamber against “suspending” Senators Leland Yee, Ron Calderon, and Rod Wright.  Anderson had the temerity to point out that Wright had already been found guilty by a jury of eight felony counts, and that Wright shouldn’t be suspended, but rather should be removed from the Senate.  Subsequent to Anderson’s floor remarks (which, if you haven’t seen them, I suggest you do so here or watch the speech below), incoming Senate President Kevin DeLeon rose up and made a complete ass out of himself, attacking by inference Senator Anderson’s motives and integrity.

Well it has now been revealed — thanks to Union Tribune San Diego columnist Steve Greenhut in his Sunday column — that Senator Anderson was given a rather unceremonious “heave ho” from his significant position as Vice Chairman of the Senate Health Committee.  I am sure that those who have circled the wagons around Wright are trying to send a not so subtle “shut up” message to those who continue to have the nerve to point out that by leaving Wright in his office of “public trust” (what a joke), the Senate is placing itself above the law.

I think that this kind of punitive action against Anderson only serves to even further degrade the State Senate as an institution.  In Greenhut’s piece Senate President Pro-Tem Darrell Steinberg’s spokesperson, Rhys Williams, sent an email that denies that there is any there there. Even if you took his word for it (and given Steinberg’s track record there really is no reason to do that), it is implausible to think that whacking Anderson like this would not create a perception of retaliation…

Of course taxpayers are the biggest losers because Anderson was an extremely able Vice-Chairman for the Health Committee.  And while that doesn’t make him irreplaceable, it means that during a key time, during the implementation of Covered California and so forth, we have our best player in the penalty box.