A Governor’s appointee with upwards of 40 violations of the Fair Political Practices Act works right in Jerry Brown’s office, and somehow has managed to retain her job while demonstrating an uncanny talent for avoiding major media’s spotlights. 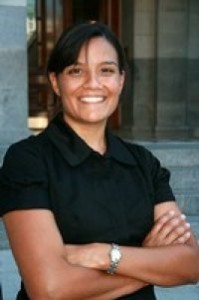 While Deputy Legislative Secretary Martha Guzman-Aceves has served as a public official in the Brown Administration managing legislation and regulatory matters for the governor, her non-profit organization lobbied the Legislature and governor’s office on various issues, including AB1081, federal immigration policy enforcement,” I reported in October 2013.

I originally reported on Guzman’s dubious tax records and conflicts of interest with several of the non-profit organizations she leads, but was denied access to the FPPC records in October.

Each perjured FPPC Form 700 had multiple omissions, and each omission is a separate legal violation. In all, at least 40 counts of statutory violations are attributable to the Office of the Governor, and Martha Guzman-Aceves’ failures to follow the Fair Political Practices Act’s clearly stated rules for disclosures of conflicts of interest and financial transactions.

While Guzman-Aceves has a long history of lobbying, political campaigning and community organizing in California, the current abuses began only a few years ago. In 2009, the national network of community-organizers, “ACORN,” the Association of Community Organizations for Reform Now, known best for registering hundreds of thousands of low-income voters, was exposed encouraging the poor to sign up for welfare in order to overload the entire system – in addition to numerous other fraud charges. The ACORN strategy was to bring radical change to America “using a tangled mess of interlocking directorates and upward of 100 affiliated tax-exempt groups,” according to Townhall.com journalist Matthew Vadum.

After video footage was released to the media showing ACORN workers giving tax tips to conservative activists posing as a pimp and prostitute, its largest affiliates in New York and California broke away and changed their names, which included the “charitable” organizations linked to several operated by or closely coordinating with Governor Brown’s Deputy Legislative Secretary, Martha Guzman-Aceves.

While most thought ACORN was kaput, it thrived under new names, according to two House of Representatives’ Oversight Committee reports on ACORN’s successors:

– “Communities for a New California” and “Alliance of Californians for Community Empowerment” are also both statewide anchor organizations in a newly emerging coalition with telltale ACORN characteristics, named California Calls Action Fund, according to California Calls.

The two reports, “ACORN Political Machine Tries to Reinvent Itself,” and “Follow the Money: ACORN, SEIU and their Political Allies,” exposed a “criminal conspiracy” and a “pattern of corruption common to all ACORN affiliates called ‘Muscle for the Money.'”

There was no way hundreds of tax-exempt groups with this level of funding were going to disappear quietly.

The Byzantine of ‘Dark Money’

“In 2011, Gov. Jerry Brown appointed Martha Guzman-Aceves deputy legislative secretary for agriculture, environment and natural resources,” I wrote in a 2013 story. “Before that, she was a founding partner of Cultivo Consulting, which said it engaged in lobbying, political campaigning and community organizing in California until recently, when its website went dark following renewed interest in Guzman’s exploits. It was a lobbying and outreach firm specializing in social, economic and environmental justice,” claiming “15 years of experience in lobbying.”

The trail of ‘dark money” into Communities for a New California and Alliance of Californians for Community Empowerment is convoluted, but telling.

Who Runs These Organizations? 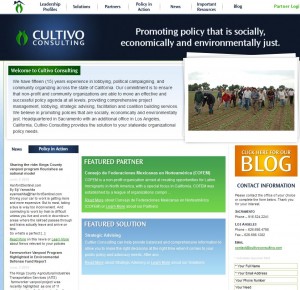 Guzman-Aceves also was listed on 2011 tax returns as president and CEO for Communities for the New California Education Fund, a 501(c)(3), as I explained in my 2013 story.

On the IRS form, Communities for a New California has a public charity status and checked off the box indicating that it receives a substantial part of its support from the government.

“Martha Guzmán Aceves and Jennifer Hernández of Cultivo Consulting were attracted to working with ALBA farmers precisely because of the potential they see in them as leaders and agents of change,” Whole Communities.org wrote in a newsletter. “’We look forward to the chance to work with ALBA and its farmer network in the future to pursue systems change that recognizes the role of small farmers’ contributions to society,’ they told us. Our experience with AB 537 in building a coalition that was successful in establishing legislation that serves multiple goals and stakeholders proved to us all what Martha and Jennifer had suspected.”

At the end of the newsletter, the author conveyed gratitude to Cultivo Consulting.

Alliance of Californians for Community Empowerment

Christina Livingston took over as Executive Director of Alliance of Californians for Community Empowerment Action (ACCE) in January 2013, but helped launch ACCE in 2010, according to a National Housing Institute story.

The same story reported “ACCE was founded in January, 2010, and has grown to have 30 staff members. The organization has spearheaded campaigns for local ordinances defending neighborhoods from the effects of the foreclosure crisis, worked on the statewide passage of the Homeowner Bill of Rights, and organized for Proposition 30 which prevented further cuts to public schools.”

Amy Schur, the original Executive Director of ACCE since its founding in 2010, moved into the role of Campaign Director for the organization. Prior to helping to launch ACCE, Schur was Head Organizer of California ACORN and had worked as a community organizer on the South side of Chicago, in Detroit, and in cities across California.

California Calls, a statewide alliance of 31 organizations organized in 12 counties, run by Anthony Thigpenn, is closely aligned with Alliance of Californians for Community Empowerment (ACCE), and Communities for a New California (CNC). Thigpenn is a former Black Panther, a community organizer for more than 30 years, and a long-time political campaign field operations manager with kudos that include the successful elections of Congresswoman Karen Bass, State Senator Kevin de Leon, Los Angeles Mayor Antonio Villaraigosa, and L.A. Councilman Martin Ludlow. His name appears as president and treasurer on a number of the corporate entities and political committees at the heart of Guzman’s “dark money” and influence scheme.