AD66 Watch: HJTA’s Coupal Calls Out Muratsuchi For Lying About His Anti-Prop. 13 Record

On June 15, 2013, liberal Democrat Assemblyman Al Muratsuchi cast the deciding vote to pass ACA 8 out of the State Assembly — legislation so bad that Jon Coupal, President of the Howard Jarvis taxpayers Association called it at the time, “the most egregious attack on Prop. 13 ever to come out of the legislature.  Muratsuchi’s vote was to gut the two-thirds vote requirement to raise taxes. 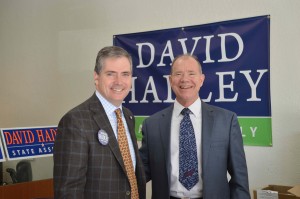 Is it any surprise that nearly a year and a half later, when running for re-election in the competitive 66th Assembly District in the South Bay Area of Los Angeles County, that Muratsuchi would not only be hoping that voters would forget about his anti-Prop. 13 vote, but he’s actually been serially lying to voters?  Muratsuchi has had the audacity in his re-election bid to characterize himself as a “protector of Proposition 13” — which is opposite of the truth.

Yesterday Coupal held a joint public appearance with Muratsuchi’s general election challenger, Republican David Hadley, to set the record straight for voters.  Coupal referred to Maratuschi as a “poser” — claiming to be a defender of Prop. 13 when he actually voted to weaken it.  Coupal called out the freshman Assemblyman’s heinous vote for ACA 8, and pointing out that had not the corruption scandals in the State Senate not caused Democrats to lose an operational two-thirds vote that they undoubtedly would have passed the legislation.  Coupal took the opportunity, in person, to reiterate Hadley’s endorsement by the Howard Jarvis Taxpayers Association PAC.

Hadley told everyone he was “proud to be endorsed by the Howard Jarvis Taxpayer Association” and reminded voters that the endorsement is proof of his commitment to the people of the South Bay.

Hadley ripped into his opponent pointing out the false claims Muratsuchi makes to voters, specifically his claims of being a protector of Proposition 13. At the October 17th debate featuring candidates for the 66th Assembly district seat, Al Muratsuchi told the public that he supports Prop. 13 – the voter approved constitutional amendment that allows California homeowners to avoid being on the streets by holding property taxes steady from year to year.  The Assemblyman conveniently forgot to tell forum attendees that while he was telling he was for Prop. 13, he was casting his vote against Prop. 13.

With the election just over a week away, voters are having to assess the candidacies of both Muratsuchi and Hadley.  I guess they will have to decide which is worse — Muratsuchi’s terrible vote to gut Prop. 13, or his pathological lying about it.  Voters would be well served by electing David Hadley, who actually will look out for taxpayers interests.