25 years ago, Reagan brought down the Berlin Wall

Twenty five years ago today the Berlin Wall came down, and the man most responsible was Ronald Reagan. 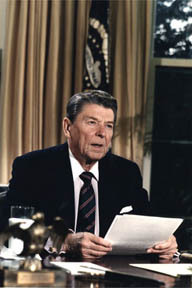 Eric Honecker, the dictator of East Germany, predicted that the wall would stand for “100 years.”  The inherent contradictions embedded in Soviet-style communism, combined with relentless pressure applied by America’s 40th president, ensured that never happened.

Reagan’s 1980 victory over Jimmy Carter produced a profound change in America’s policies toward the Soviet bloc.  Asked by his new National Security Adviser, Richard Allen, about his approach to the Cold War, Reagan replied with this: “We win.  They lose.”  The vision was simple, and fundamentally different than any of Reagan’s predecessors, all of whom sought instead to reach some form of peaceful accommodation with the Communists

Reagan would have none of it.

Liberal historians have taken to painting a very different picture of the events surrounding the fall of the wall and the eventual collapse of the Soviet Union.  Their take on events tends to give the bulk of the credit not to Reagan, but to then-Soviet Leader Mikhail Gorbachev.

Gorbachev does deserve some credit.  He never cared for Honecker, East Germany’s hard line communist ruler, whom he considered, along with the leaders of Bulgaria, Czechoslovakia, and Romania, too inflexible.  Honecker had no interest in changing anything.  Communism, he believed, was fine just was it was.

On October 7, 1989, one month before the wall fell, Gorbachev attended the 40th anniversary celebrations of the founding of the DDR (Deutsches Demokratishes Republik, or East Germany).  Honecker’s regime was under strain as thousands of East Germans had fled the country over the summer via an opening that had appeared in the Iron Curtain as Hungary dismantled its barbed wired border with neighboring Austria. Rather than unleash the half-million Soviet troops stationed in East Germany to crush rising dissent, Gorbachev made the comment, “life punishes those who come too late.”  It was seen as a lack of confidence in Honecker, making clear there would be no Soviet bailout for the stubborn leader.  Just 11 days later, Honecker was gone.  And within weeks, so was the wall.

Rather than accommodate Soviet ambitions, Reagan’s strategy was to keep the pressure on, confident that the deeply inefficient Soviet system simply could not withstand it.  Contrary to the Soviet propaganda, too often willingly echoed by left wing American academics and politicians, the Soviet Union was in effect bankrupt.  It could simply not sustain the huge military it needed to keep its own people and empire in line, and its people suffered a standard of living well below that of the west.

Around the world, Reagan applied pressure.  He modernized America’s armed forces, strengthened ties with our allies, reinvigorated NATO, challenged Soviet-backed Communist movements in Central America, and worked to make Soviet offensive missiles obsolete via his Strategic Defense Initiative (“Star Wars”).  He kicked the communists out of Grenada, and pressured the Soviet puppet government in Nicaragua (elections were held in 1990).

On the world stage, Reagan was determined to not let the Soviets get away with a thing.  When the Soviet air force shot down an unarmed Korean 747 in 1983, within hours Reagan took to the air with a televised address from the Oval Office blasting the Soviet for murdering 269 innocent people.

By contrast, when Russian-backed forces this summer shot down an unarmed Malaysian passenger plane flying over Ukraine, President Obama went to a fundraiser.

Finally, Reagan called out the Soviets generally and Gorbachev specifically with his 1987 speech at the wall where he famously challenged, “Mr. Gorbachev, tear down this wall!”  The State Department bureaucracy kept trying to edit that line out of the speech, yet Reagan insisted.  Another example of Reagan’s triumph over an often visionless bureaucracy.

Communism didn’t fall.  It was pushed, by millions of people, leaders, and the chief among them, was a Californian named Reagan.