Nearly 21,000 Northern California Kaiser nurses are walking off the job for a two-day strike. Tuesday was day one of the California Nurses Association Kaiser strike.

Kaiser was forced to hire and train nearly 3,000 temporary nurses because of the strike, with estimate costs of $20 million per day, Kaiser reports. 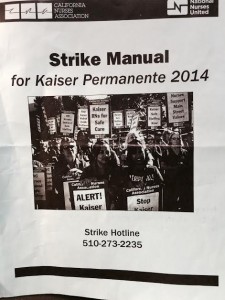 Labor meetings last summer focused on upcoming changes and growth anticipated by the Affordable Care Act (Obamacare). And if there is growth, the nurses union wants its cut, according to a NPR story from July.

Nurses claim there are more than 30 operational proposals still unresolved after only three months of bargaining. They want 2,000 vacated positions filled, better protections for use of sick leave, more time with patients, more flexibility over breaks, and more training and education, NPR reported.

And the nurses union is throwing in the Ebola scare as an issue “to try to win PR points with the public.”

The CNA said the strike will impact 21 Kaiser hospitals and 35 clinics, yet somehow, Kaiser will remain open during the strike.

The nurses union released a statement claiming that this strike is Ebola-related, and the nurses are striking because they don’t have the resources needed to care for patients.

But Kaiser nurses I spoke to said the strike is purely about more money, and because the CNA wants more power.

Of the nine people treated for Ebola in the United States, all have survived except Thomas Eric Duncan, who traveled to Dallas, Texas from his native Liberia for U.S. medical treatment. Duncan was too far along and died of Ebola last month.

His illness created a media panic, “which in the end proved to be unmerited, that a widespread US outbreak could occur,” Yahoo News reported.

It’s a contract year. The last agreement between the California Nurses Association and Kaiser Foundation Hospitals was dated September 1, 2011 through August 31, 2014.

The nurses I spoke with were unhappy with the strike, and concerned more about losing two days of pay. They said this strike has been in the works for a year. 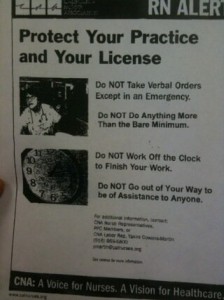 However, it appears it’s been in the works for several years, perhaps even since the ink was barely dry on the last contract.

The photo at right is a flyer circulated at several Kaiser hospitals in 2011 telling nurses:

“Do NOT Work Off the Clock to Finish Your Work.”

“Do NOT Do Anything More Than the Bare Minimum.”

“Do NOT Go out of Your Way to be of Assistance to Anyone.”

Do NOT Take Verbal Orders Except in an Emergency.”

In 2011 and again in 2012, the nurses had a “sympathy strike.”  Kaiser attempted to fight back, but because their contract did not specifically say they could not “sympathy strike,” they got away with it.

The CNA helped NUHW leverage its newly formed 4,000-member footprint at Kaiser with the help of CNAs 17,000 Kaiser RNs, and did it without a vote by members authorizing the strikes, the Business Journal reported. The strike then, and again now, proves the strikes are not about patient care, or Ebola, instead helping the CAN grow its base, and dues collected, while pushing its labor union political agenda. 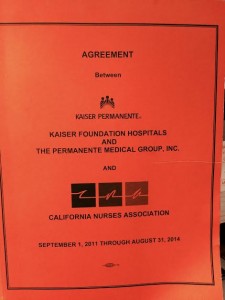 Kaiser advertises its nurses make $86,294 annually, which is approximately $41 per hour, starting pay. According to some nurses, for students who recently graduated from nursing school in California, starting pay is between $38 and $44 per hour. I talked to nurses who have been with for Kaiser for three years and make $97,000.

But remember, as with many employees, nurses also talk to each other about their pay. Many nurses say $60 to $85 an hour is more likely the standard pay. However, some nurses are making as much as $85 per hour with the shift differential and seniority status.

Standard shift differential is 10 percent for second shift, and 15 percent for third shift workers. Second shift in most industries, begins at or after 2:00 p.m. And night shift can be anytime after 6:00 p.m.

According to the Kaiser/CNA contract, Kaiser union nurses who work even four hours of an evening, defined as commencing any time after 12:00 noon and ending after 6:00 p.m., shall be paid a shift differential of 11 percent in addition to their base pay.  Kaiser’s night shift, which commences after 10:00 p.m. and before 6:00 a.m., receives a 17 ½ percent shift differential.

The CNA/Kaiser contract agreement talks about consecutive weekend work — for which nurses are paid a 10 percent shift differential — and specifically, a third weekend rule. The Kaiser/CNA contract says, “Under no circumstances will and RN/NP who is awarded an Every Weekend position be eligible for the third weekend penalty pay referenced in paragraph 728 of the agreement.

“In order to qualify for third weekend pay, the Nurse must perform work on the second of three consecutive weekend periods,”  section 728 0f the contract says.

According to some nurses, that rule has been grossly abused and manipulated. The manipulation occurs when a nurse will work one weekend, calling in sick the second weekend, and getting paid for it with sick pay, and then working that third weekend.  Kaiser has been trying to crack down on this abuse.

Where is Florence Nightingale?

Nursing’s Florence Nightingale Pledge is an adaptation of the Hippocratic Oath taken by doctors, historically taken in an effort to promote the ethical practice of medicine. However, liberal nursing schools in the University of California college system modified the pledge, removing the word “God,” and removed the reference of purity, replacing it with references to social justice.

“I solemnly pledge myself before God and presence of this assembly;

To pass my life in purity and to practice my profession faithfully.

I will abstain from whatever is deleterious and mischievous and will not take or knowingly administer any harmful drug.

I will do all in my power to maintain and elevate the standard of my profession and will hold in confidence all personal matters committed to my keeping and family affairs coming to my knowledge in the practice of my calling.

With loyalty will I endeavor to aid the physician in his work, and devote myself to the welfare of those committed to my care.”