President Obama announced he will sign an executive order granting “deferred action” to two illegal immigrant groups- parents of United States citizens or legal permanent residents who have been in the country for five years, and young people who who were brought into the country illegally as of 2010.

That announcement came on the heels of Sheriff Jones’ video address to the President. 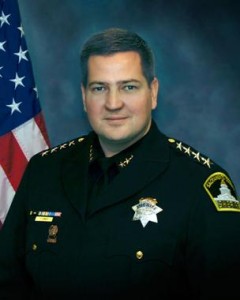 “You’re the only singular person in this entire country that can advance or adopt meaningful immigration reform,” Jones said. “By that very definition then, it is your singular failure alone as to why we do not yet have reform, why America continues to be at risk and new crimes and new victims are mounting each and every day in every single state,” Jones said in the video.

“This person is in this country illegally from Mexico,” said Jones. “He has a significant criminal history.” The illegal alien killer, Marcelo Marquez, had previously been deported four times, according to Sheriff Jones.

“Only you are singularly responsible for the hands off policy that exists of the hands-off policy in Homeland Security and its subsidiaries including customs and  border protection,” Jones said.

“I understand the integral role that the undocumented population plays in our national and state economies. The problem I have is I can’t tell which ones are good and which ones are evil, and neither can you. By their very definition they are undocumented,” Jones said.

“Untracked, untraced and unaccounted for  – there is no way to know which of the 12 million undocumented persons in this country are good or bad. Don’t you think there should be some way of knowing, or at least some way to track [them]?” he asked.

“This is not about racism  – it is about an increasingly violent and uncertain world in which we are inadequately protected,” Jones said.

“Mr. President, my request to you today can simply be stated: make immigration reform a priority. I do not care which reform you choose. Pathway to citizenship, guest work program, or any of the other innovative programs that currently exist.”

“But deferred action or amnesty is deferring this crisis. It is not reform, it’s simply giving up. It does nothing to make America or the undocumented population any safer.”

Jones continues: “For any facet of immigration reform to work our borders must be secure. So what possible reason could there be for not starting on this immediately?”

“An American patriot, Ronald Reagan, once told Russian President Mikhail Gorbachev to ‘tear down this wall,’ to preserve democracy and secure safety and freedom for a nation,” Jones said.

“Mr. President, I’m asking you to build up that wall for the very same reasons.”