Election 2014: Lessons from the districts that changed parties

This morning I’ll address conservative legislators from across America at the American Legislative Exchange Council (ALEC) States and Nation Policy Summit in Washington DC.  My topic: the 2014 election results and lessons for the future.  Since it’s a national group, I’ll focus on the big picture.  Yet, there are very important lessons to be learned from what happened in California.  Let’s take a look.

Even in a strong “wave” election year like 2014, the wave itself is not the dominant force in driving outcomes.

For all of the “major” changes resulting from the wave, the strongest force on Election Day was that of incumbency.  The vast majority of elected officials who sought re-election, of either party, won.

Looking nationally, even with a strong pro-Republican wave, the total number of Democrat governors defeated on Election Day was exactly…one: Democrat Pat Quinn of Illinois.  Meanwhile, eight Democrat governors were re-elected.  The remaining three governor seats Republicans picked up were races where no incumbent appeared on the ballot: Arkansas, Maryland and Massachusetts.

In California state elections, incumbency was similarly the dominant force.  Not a single member of Congress or statewide official was defeated.  Most changes in partisan control came in the legislature (and one open House seat that went to the Democrats).  Out of 100 seats on the ballot (80 in the Assembly and 20 in the Senate), a grand total of six changed parties.  That’s a turnover rate of just 6%.  The Soviet politburo probably had higher turnover.

What can we learn by looking at these six elections? 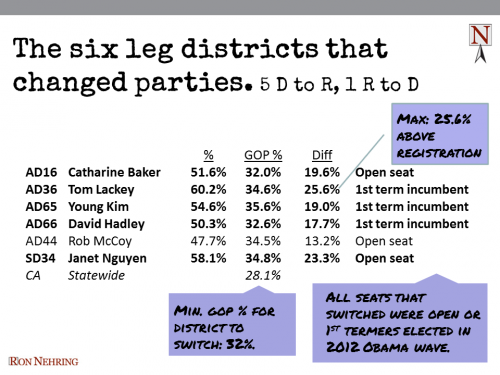 Looking statewide for a moment, the incumbency factor weighed heavily there as well.  The top Republican performers statewide were Pete Peterson for Secretary of State and Ashley Swearengin for Controller – both of whom were running for open seats.  They received roughly 4 points more than the next closest statewide GOP candidate (me).  Call it the open seat bonus.

Back to the legislative seats, what else can we learn?

Looking at candidate performance and voter registration stats, we can see that the least Republican district (by registration) to change parties was AD 16 (32% GOP, won by Catharine Baker).  No seat with less than 32% GOP registration switched.

Statewide, Republican registration stands at 28%, or 4 points below the minimum established in AD 16.  To get GOP registration up to 32% would require the registration of roughly 1.4 million new Republicans, excluding any increase in Democrats or independents.  Such a shift will require capitalizing on an enormously popular Republican presidential candidate, and president, in 2016 and beyond.  More on that in a future column.

A 32% GOP registration threshold does not guarantee Republican victory by any means.  Take, for example, AD 44, where Republican Rob McCoy lost the seat previously held by Republican Jeff Gorrell.  AD 44 is 34.5% Republican.  Or, 2.5-points better than AD 16 where we won.  So, why the loss?

Candidate performance above Republican registration varied widely.  In AD 66, Republican Palmdale Mayor Pro Tem Tom Lackey exceeded GOP registration by a substantial 25 points, the most of the six districts that changed parties.  In AD 44, relentless Democrat attacks on Republican McCoy (a great candidate with a very impressive volunteer operation) drove his performance down to 13.2% above GOP registration – not enough for a victory.

Looking ahead, our best opportunities to expand Republican leadership in Sacramento come with open seats in 2016 and 2018 where GOP registration is, or can be, driven to 32% or higher.  Those opportunities can expand in competitive districts with a strong GOP candidate (like a Tom Lackey) with an ability to surge well  beyond GOP registration.  In competitive districts, candidate recruitment is an essential component in producing victory.  Meanwhile, in addition to offense, there’s playing defense.  You can bet Democrats will see higher voter turnout rates anticipated in 2016 as an opportunity to challenge some of our new Republican legislators, especially Assemblywoman Baker and Assemblyman Hadley.

Statewide, we will have new opportunities in 2018 as four statewide offices, plus a fifth if Dianne Feinstein retires, are open seats.  The course of our state going into the next decade will be charted then.  Winning multiple statewide offices in 2018 is absolutely critical to re-establishing the Republican Party as one that provides statewide, not only regional, leadership in California.  For this reason, and for the opportunity to put our ideas into action to help out fellow Californians, I hope to see some of my 2014 running mates on the ballot again soon.