Opponents of assisted dying warn that significant numbers of seriously ill people, as well as the disabled, the mentally ill, and even those who are depressed, could end up being swept up in the new law, prioritizing cost effectiveness, over higher costs of ongoing care. 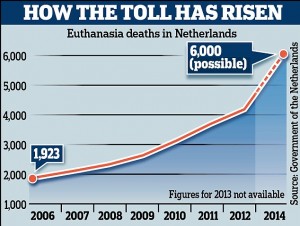 How the toll has risen: The Netherlands has seen deaths double in just six years

Senate Bill 128, is modeled on assisted suicide legislation in Oregon, which narrowly passed in 1997, and was sent to the voters for reconsideration, but again narrowly passed.

One of the myths about assisted suicide in Oregon is that it is highly regulated and has strong safeguards, said Marilyn Golden, senior policy analyst with the Disability Rights Education and Defense Fund. Golden said proponents gloss over the serious lack of safeguards in Oregon’s law.

“The State of Oregon’s minimal data collection and gross lack of strong oversight of assisted suicide undermines any pretense of rigorous monitoring or strict regulation. A series of problems renders any conclusions based on the data to be critically flawed. Washington State’s law, which is much newer, contains similarly limited, deeply flawed oversight provisions.”

“Those alleged safeguards include limiting assisted suicide to people who are terminally ill, requiring doctors to present patients with the option for palliative care, ensuring that each request is voluntary, requiring that a second opinion be obtained, ensuring that patients are competent to make the decision to end their lives, requiring a fifteen-day waiting period, and requiring doctors to inform the state of any lethal prescriptions they write,” according to the Michigan Law Review, “Physician Assisted Suicide: A Medical Perspective.”

Deaths Have Doubled in the Netherlands

Proponents of assisted dying also gloss over the actual data and experiences of the significantly increasing number of doctor-assisted deaths in the Netherlands and Belgium, two countries with medically assisted suicide. In the Netherlands, where euthanasia has been legal since 2002, deaths have doubled in just six years.

“Legalizing assisted suicide is a slippery slope toward widespread killing of the sick,” Professor Theo Boer, a former euthanasia supporter in the Netherlands told the British Parliament this week. Professor Boer warned of a surge in deaths if Parliament allowed doctors to give deadly drugs to their patients, the UK Daily Mail reported this week. “‘Don’t do it Britain,’ said Boer, a veteran European watchdog in assisted suicide cases. ‘Once the genie is out of the bottle, it is not likely ever to go back in again.’”

“Activists continue to campaign for doctor-administered death to be made ever easier and ‘will not rest’ until a lethal pill is made available to anyone over 70 who wishes to die,” Boer said. “Some slopes truly are slippery.”

Professor Boer admitted he was “wrong – terribly wrong, in fact” to have believed regulated euthanasia would work. “I used to be a supporter of the Dutch law. But now, with 12 years of experience, I take a very different view,” the Daily Mail UK reported.

“The law would be fundamentally like Oregon’s 1997 Death With Dignity Act—requiring an adult patient to have residency in the state and two doctors in agreement that he or she has less than six months to live and full mental competency,” according to Sen. Wolk. “Other safeguards Wolk referred to as “crucial”—for both patients and physicians—will also be folded in.”

“It’s time,” Wolk said in a press statement. “No one should have to go through horrific pain and prolonged suffering when the end is clear.”

Compassion and Choices, with the George Soros touch

Wolk said she introduced the bill now because of Brittany Maynard, the 29-year-old California newlywed who became a media darling when she chose to relocate with her husband to Oregon to end her life following a diagnosis of late-stage brain cancer. Because California doesn’t have a doctor-assisted suicide law, Maynard and her new husband Dan Diaz, sought one in Oregon.

Maynard also became a full-time activist with Compassion and Choices, a George Soros-funded pro-suicide-organization that has tried to convince lawmakers it is a grassroots organization. Pffft.

But what if someone else is making that choice for you?

“Assisted suicide is a direct threat to those who are viewed as a significant cost liability,” said Catherine Campisi, PhD, in a press statement from the Californians Against Assisted Suicide. Campisi, the former Director of the California Department of Rehabilitation appointed by former Governor Gray Davis, noted some of the reasons disability rights organizations oppose assisted suicide: “By adding assisted suicide to the suite of treatment options available, it becomes the cheapest option available and makes it easier for implicit and explicit pressure to be levied on the most vulnerable.”

“There are no assisted suicide ‘safeguards’ that can ever protect those most vulnerable in society, particularly in a state as diverse as California,” said Tim Rosales, spokesman for Californians Against Assisted Suicide.  “These are just some reasons why there is such a broad, bipartisan coalition formed to aggressively advocate against this bill.”

“If these bills pass, some people’s lives will be ended without their consent, through mistakes and abuse,” said Marilyn Golden. “No safeguards have ever been enacted or proposed that can prevent this outcome, which can never be undone.”