More than a few years have passed since Clinton scandals littered the daily headlines.  Whitewater, Juanita Broddrick, Gennifer Flowers, Vince Foster, impeachment, Marc Rich, the pardons, the White House Travel Office, Commercegate – by the time Bill Clinton left office in January 2001, many  Americans were ready to leave the (long list of) sordid affairs behind them.

Hillary Clinton succeeded in distancing herself from most of the ethical cloud that surrounded her husband’s presidency.  And for a while, it looked like she would be judged on her own record as her White House bid gets under way. 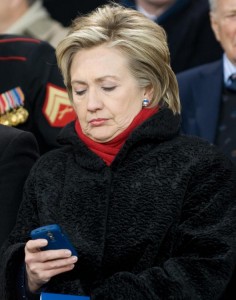 That is, right until this email scandal reminded everyone that when it comes to “the Clintons,” the truth is always subject to future revision.

The Hillary Clinton email system is a wonder to behold for its legal, rather than technical, design.

Most Americans use personal email accounts through a publicly system such as Google’s Gmail, Yahoo Mail, or a similar service.  These services can be configured to deliver mail directly to a smartphone or tablet, and mail can be accessed directly through a website.  Former CIA Director David Petraeus used private Gmail account to communicate with his biographer, Paula Broadwell, with whom his relationship ultimately led to his resignation.

The Clinton email system is much more sophisticated.  Instead of relying on a system such as Gmail, or even a more private Microsoft exchange service hosted by any one of dozens if not hundreds of companies, the Clintons appear to have gone through the trouble of actually building out their own email server.

A server is just a computer, although one with a function of primarily storing information and making that information available to users online, all the time.  Most people don’t run their own servers because it is far cheaper to, in effect, rent space on someone else’s server for a fraction of the cost and trouble.

From a technical standpoint, it makes little sense to run your own email server.

Unless, of course, your goal is to make sure no one else has copies or records of your emails.  Ever.

Recognizing that possession is 90% of ownership, the Clintons set out to ensure that the no other entity – such as a hosting company, or a government agency – had copies of their email correspondence.  Copies could be in the form of backups, or storing email on a RAID (redundant array of independent disks) drive that keeps multiple copies of data as a safeguard against a hard drive failure.

There is no third party to be subpoenaed to turn over copies of records, or leak them.  The Clintons, and only the Clintons, would decide who will see Hillary’s emails.  Including those that relate to official government business during her four years as Secretary of State.

The former Secretary of State has turned over 55,000 pages of email to the State Department, and she tweeted on Wednesday that she wants them released and has “asked State to release them.”

Of course, the State Department can only release those emails that Clinton turned over.  The public gets to see her emails, but only those that she decides.

The reasons Hillary Clinton should not have concocted this elaborate system to keep control of her emails, including those related to her official duties, are important.  First, government employees supposed to use secure government communications systems, especially high ranking officials who are most likely to be the targets of foreign espionage operations.  It’s pretty doubtful that the server hosting HDR22@clintonemail.com uses the kind of robust encryption technologies as the state.gov servers.

Further, government communications systems automatically archive emails and messages so they can become part of the government record and can be made available to other branches of government (such as those investigating Benghazi, for example), and the public in response to Freedom of Information Act requests.

Liberals in Washington who could otherwise be counted on to line up in defense of Hillary Clinton have chosen to call her out instead.  Ron Fournier of National Journal, certainly no movement conservative, said her response “is reminiscent of the 1990s, when her husband’s White House overcame its wrongdoing by denying the truth, blaming Republicans, and demonizing and bullying the media.

“It’s a shameless script, unbecoming of a historic figure who could be our next president – and jarringly inappropriate for these times,” he added.  “This is part of a pattern of bad behavior.”

The Democrats have an opportunity to nominate a candidate who will move their party, and the country, forward.  Instead, Hillary’s Clintonian attempts to weave and dodge remind us all that her candidacy will do no such thing.  As a growing number of Democrats realize, Hillary represents a return to the darkest parts of the Clinton legacy.

Fortunately, there is still time for Democrats to change their mind.