UPDATE: Houston STILL has more housing starts than ALL of CA

I’ve posted on this topic before. But the numbers have been updated, with the vaunted post-recession “housing building boom” in California fizzling out.  It’s a sobering graphic. 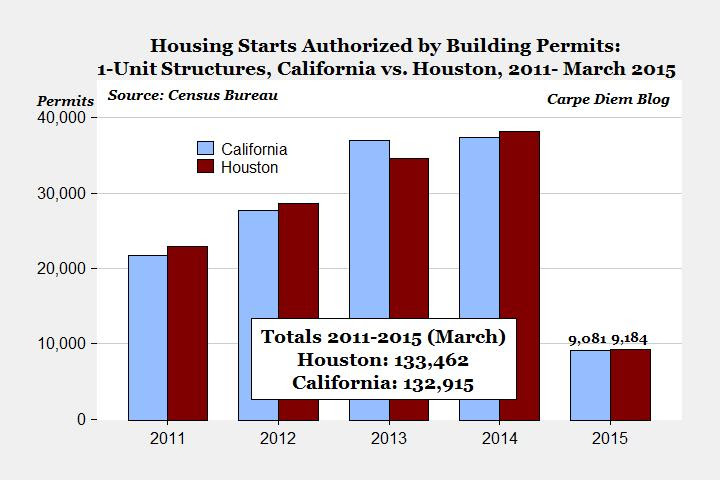 Related: The one-way rental rate for a 26-foot U-Haul truck from Los Angeles, CA to Houston, TX in mid-May is $2,371, which is about 3 times the $806 rental rate going in the opposite direction from Houston to LA.

RIDER NOTE:  The above material is excerpted from an informative free daily email I get from the CARPE DIEM economic website. It’s ALWAYS got great info to peruse.

Hence I’m including below for your consideration the OTHER nine items that came in today’s email.  I encourage readers to subscribe to this service.  I DID mention “free,” didn’t I?
SUBSCRIBE LINK:  https://feedburner.google.com/fb/a/mailverify?uri=aei-ideas/carpe-diem

Only 27% of young adults could answer all three questions correctly.

3. Quotation of the Day I, from David Frum:

The sale of access was designed into the post-2001 Clinton family finances from the start. Probably nobody will ever prove that this quid led to that quo … but there’s about a quarter-billion-dollar of quid heaped in plain sight and an equally impressive pile of quo, and it’s all been visible for years to anyone who cared to notice.

4. Quotation of the Day II, from Charles Koch:

If somebody smokes a joint, we’re gonna go in and bust them? We’re gonna raid houses in case somebody has a banned substance? Confiscate their houses? My God, if people don’t see that as an abuse of force, of too much government, then we’re just not communicating.

6. Who’d a-Thunk It I Even with a $7,500 subsidy from American taxpayers, the cachet of electric vehicles and hybrids has faded away? Government can’t artificially, socially engineer car demand?

7. Markets in Everything: Medical shopping tools like MediBid and PokitDoc help patients find cash prices for medical procedures. New Mexico woman was quoted $79,000 for hip surgery at her local hospital — she paid $18,000 in CA Using MediBid.

8. Economic Sanity Somehow Prevails in Texas: Texas House Votes to Deregulate Natural Hair Braiders, thanks to the The Institute for Justice.

9. America, Here’s Your Cruel Drug War I: Timothy Tyler (born 1968) has been serving a sentence of life in prison without parole since age 24 for possession and distribution of LSD at Grateful Dead concerts.

10. Video of the Day and America, Here’s Your Cruel Drug War II: A Young Girl Could Treat Her Uncontrolled Epilepsy With a Plant (Medical Weeds) — If Only She Had Access To It.