Labor unions are still running the show in the Democratically-controlled California Legislature. Despite hearing from more than 50 farmworkers on Wednesday, the Assembly Labor and Employment Committee denied the farmworkers the right to vote on their own labor negotiated contacts, even though this right is enjoyed by other union members in California. 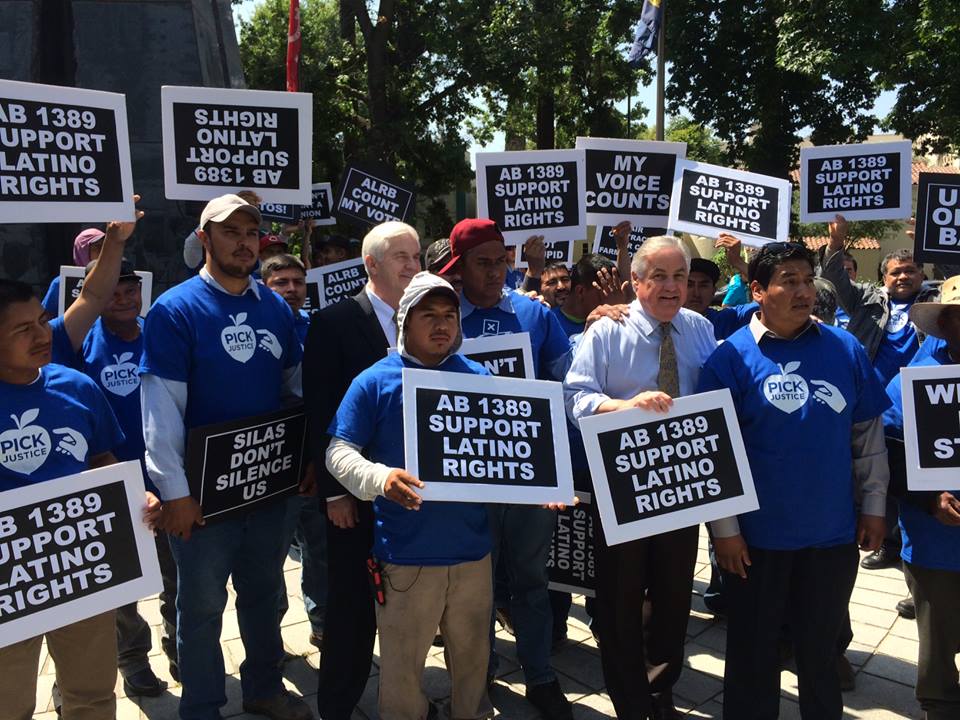 Assemblyman Jim Patterson and Assemblywoman Shannon Grove presented AB 1389 before the Labor Committee to ensure California farm workers are protected from unions willing to force them into contracts they don’t support. The bill was killed on a party line vote.

Patterson explained that a large group of farm workers came to he and Grove requesting the bill, because under current law, unionized farm workers do not have the right to vote on a government imposed contract. Workers also do not have the right to attend mediation meetings between the employer and its union. They can also be forced to pay union dues even if the union disappears for 20 years and then shows up demanding dues.

“It’s discrimination to deny them attendance at hearings,” Patterson said. “This needs a legislative fix.”

All these injustices would be remedied by the Fair Contracts for CA Farmworkers Act, AB 1389.

“Legislators in this capitol are constantly pontificating about their love of democracy, their fight for equality, and their willingness to stand up for the rights of powerless minority groups” said Assemblywoman Grove. “But they stand by and refused to protect California’s Latino farmworkers. Why? Because their beloved United Farm Worker union is the one doing the abusing.”

Gerawan Farming worker Silvia Lopez sent a letter last year to members of the California Legislative Latino Caucus, asking for help in her multi-year fight with the Agricultural Labor Relations Board and the United Farm Workers Union.

The ALRB has refused to count the thousands of ballots Lopez collected and her co-workers cast in Nov. 2013 to decertify the UFW labor union to end its representation.

But she got no response from the Latino legislators. Lopez, who is leading the effort for the workers, sent Sen. Ricardo Lara, D-Los Angeles, Latino Caucus chairman, and each member of the Latino Caucus, a letter in English and Spanish.

Patterson and Grove’s legislation was proposed in part to address the abuse thousands of Gerawan Farm Workers from Fresno have received at the hands of the United Farm Workers Union (UFW) and California’s Agriculture Labor Relations Board (ALRB). As the Central Valley’s highest-paid farmworkers, the workers have been confronting the ALRB since 2013 to prevent being forced into a labor contract against their will by the UFW, who abandoned them 20 years ago. The workers have been shut out of ALRB hearings and don’t have the legal right to approve or decline the labor contract that is being negotiated for them. These same workers voted in 2013 to decertify the UFW, but the ALRB has refused to count the votes.

Grove, who was the Vice-Chairwoman of the Labor Committee last year, spoke directly to Labor Committee Chairman Assemblyman Roger Hernandez, D-Los Angeles: “We always hear about how important it is to have all votes counted in this committee. Janitors, housekeepers and others have been here, and we have  voted overwhelmingly to support them.”

Grove said she went to the Latino Caucus website and re-read the guiding principles:

“Your principles say the Latino Caucus wants to encourage more Latinos to engage in the political process through policy forums. Well they are. It says to promote legislation and policies that have a direct and meaningful impact on Latinos from all walks of life. They are. And they are fighting for fair wages, safe working conditions, and equal treatment under the law for all. They did that. They took a vote. And you demand justice – they are appealing to you to make a choice for justice.” 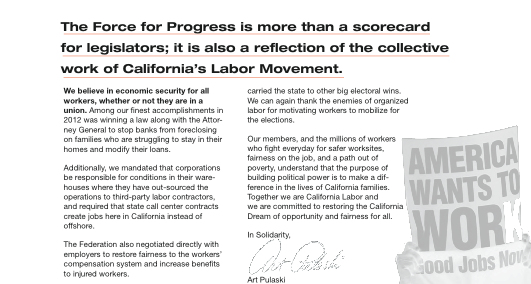 UFW attorney Mario Martinez and the California Labor Federation were the primary opposition to AB 1389.

The California Labor Federation claims, “we believe in economic security for all workers, whether or not they are in a union.” The CLF annual scorecard gave Hernandez a 96 percent last year on labor-supported bills.

“Existing law was carefully crafted because of decades of employer intimidation,” Caitlyn Vega representing the CLF said. “There are always ways to get around a union.”

Martinez used his time to deride Gerawan Farming, going back 20 years, just as he recently did at a recent event celebrating the Agricultural Labor Relations Act’s 40th anniversary.

This bill would have:

         Given farm workers the ability to vote to approve or decline the terms of a contract.

         Given farm workers the right to attend and monitor all labor contract mediation meetings held by the state’s ALRB.

         Required the ALRB to nullify a union contract if the union abandons the workers for a period of three or more years.

“It is wrong to force workers into a union contract against their will, but that is what the Governor’s appointees are doing to thousands of Gerawan Farm Workers,” said Assemblywoman Grove after the hearing. “It’s also wrong for the ALRB to not count the workers’ votes.  I’m standing alongside Assemblyman Patterson and thousands of California’s farmworkers to defend their right to choose.”

The bill was killed by the Labor Committee on a party line: