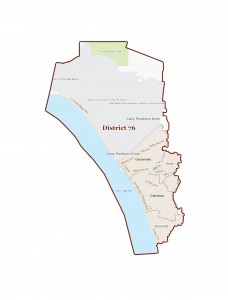 The 76th Assembly District represents the North San Diego County communities of Oceanside, Carlsbad, Vista, and Encinitas.  It is a suburban district with some of the best public schools in San Diego County, and a thriving life sciences industry.  Currently represented by Rocky Chavez, who is now running for U.S. Senate, the area was previously represented by Martin Garrick, and Mark Wyland before him.  The current district is considered safe Republican with a 41-31% GOP registration advantage.  No Democrat even filed in the he last competitive Primary Election in 2012.

With the announcement by Chavez that he is seeking the Republican nomination for the United States Senate, this means that the Assembly seat will be open, and predictably this GOP-rich seat is drawing Republican candidates.  Already with his hat in the ring is conservative Oceanside City Councilman Jerry Kern.

Today longtime businessman and biotech executive Phil Graham is announcing his candidacy for the seat.  I have known Phil for some time.  Most recently I’ve interacted with him as an executive with the Sanford-Burnham Institute, a life-sciences firm headquartered in La Jolla.  A lifelong Republican, politics is literally in Phil’s blood – as his mother is none other than Gayle Wilson, wife of former Governor and former U.S. Senator Pete Wilson.

Graham’s announcement certainly goes a long way towards closing the door for Chavez to pull back from his statewide run and seek re-election.

I spoke with Phil on the phone, and had the chance to do some Q&A.  So here is a transcript of our chat… 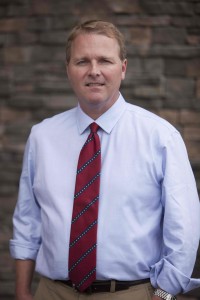 [**Update:  In announcing his candidacy this morning, Graham rolled out an endorsement from local Congressman Darrell Issa.]

Phil, thank you for taking the time to chat with me for a brief Q&A on your big announcement.  Congratulations on your big decision to run for the State Assembly.

“Thank you, Jon.  I never pictured myself running for office but when Rocky announced his campaign for U.S. Senate, a number of people suggested it.  I didn’t take it seriously at first but the more I thought about it, I just felt like this was the right time for me and here was this great opportunity.  I’m really excited about it.”

Why are you running for State Assembly?

As someone whose spent their career in business, and more recently in philanthropy and life sciences, I’ve been very disturbed by what I’ve seen happen in Sacramento.  While the most talked about problems are the legislature’s hostility to small business, in the form of higher taxes and more complicated regulations, there is the problem of union influence.  Organized labor has a stranglehold on the Democrats and our state policies are no longer representative of what is best for our families, our communities, or our economy; they are about what union bosses demand from the legislators they control.

What are your guiding principles?

I am a free-market conservative, and a strong believer in the principles of liberty and freedom.  Liberty is a principle that doesn’t play the central role in politics that it should.   It is so fundamental to who we are as nation and if average citizens understood the importance of liberty in their lives, and in their relationship to government, I think we would be much better off as a state – and as a country.  Our liberties are eroded daily, and most people don’t realize it because they aren’t paying attention.  I plan to be guided by this principle and will measure every policy position from the standpoint of how it protects Californians’ liberties and promotes freedom.  These economic and personal freedoms are values that result in a higher quality of life.

What is your experience prior to deciding to run for Assembly?

I was born and raised in San Diego County.  After graduating from USC’s Marshall School of Business, I earned my MBA from Thunderbird School of Management, and began a career in business.  For several years, this took me to Singapore working in international business, which gave me some very unique perspectives on free markets, the importance of trade, and the importance of tax and regulatory structures and how they can encourage growth.  And how they can stifle it.  Unfortunately, California’s adopted the latter posture, passing policies that make it more difficult for businesses to expand, create new jobs, grow our tax base, and create new opportunities.  For the last several years, I’ve been an executive at the Sanford-Burnham Institute, a world-renowned leader in cancer research.  While there, I was immersed in the vibrant and very exciting life sciences, which are creating live-improving, and often life-saving breakthroughs that will have amazing impacts on society.  But these companies also represent a critically important sector of our economy.  They are growing very fast, they are creating new good-paying jobs, and they are now one of the pillars of our new economy.

What do life sciences mean to San Diego?

It is much more than what it means for San Diego.  For starters, the research and breakthroughs occurring in biotechnology will improve the health and welfare of people around the world.  In California, biotechnology is emerging as the next great economic cluster for California, following on the heels of what’s happened over the last decades in technology in the Silicon Valley.  When you look at the hundreds of companies that are growing in North County in the life sciences community, it is incredibly exciting.  We have the opportunity to make a huge mark on mankind and create thousands of good paying jobs throughout the region.

What are the barriers to the biotech industry?

Our state’s economic climate, and the tax and regulatory burdens, are making it very difficult for these companies to remain competitive.  The State forces them to spend increasing amounts of time focused on compliance rather than the core of their business.  Just recently, CEO Magazine named California the 50th worst state in the country for doing business – for the 11th year in a row.  How often to we have to make lists like this before our policy-makers realize what they are doing isn’t working and that we are threatening our long-term success.  There’s a reason successful businesses are fleeing the state for places like Texas, and that’s our hostility to the very job-creators we need to be successful if we are going to improve the lives of our residents.  Austin, Texas is quickly becoming an important life science cluster and the state has been very aggressive in recruiting our businesses.  And we have no one to blame but ourselves.

Nearly two-thirds of the legislature is Democrats and Republicans have very little influence in Sacramento, how can you be impactful?

Well, I think the importance of life sciences can help me do that.  I’d like to be a champion for the biotech industry and I believe if we can educate policy-makers of either party on the importance of this industry to our economy and the well-being of our citizens, and our nation, we can move past partisan squabbling, and focus on how we can help this industry grow.  That would be a start toward demonstrating what smart, sensible taxing and regulating can do to help our economy, rather than punish job-creators.  As we are successful in this sector, we can start educating policy-makers on the changes that can help other sectors grow, reducing people’s dependence on government.  And I believe Democrats are tiring of being bullied by self-serving and heavy-handed union bosses.  If we can break the hold labor has on policy-makers, we can make some progress.

What are some of the other issues you are focused on?

Well, you can’t be serious about the economic issues without taking a serious look at our education system.   We are not preparing our children for the future in a way that we can expect to be economically competitive in a global economy.  Too much money is going into bureaucracy, administration, and regulation, and not enough dollars are going into the classroom.  We need to change that dynamic.  We need to instill more local control of our schools so that those closest to the challenges and opportunities unique to each school and each school district are empowered to deal with them.  Our teachers, parents, and administrators here in North County know far better, and care far more, about the success of our schools than some faceless bureaucrat in Sacramento.  It’s always amazed me that these big government statists’ believe they actual know better or care more about our children’s’ education than we do.

You come from a political family, did that have anything to do with your decision to run?

Obviously I’m more politically aware and engaged coming from a political family, but to be truthful, I never saw myself as a candidate, or with any burning desire to be in politics.  But the last few years I’ve become increasingly frustrated with what I’ve seen happening.  I mean how often do the people we elect need to hear about how bad things are, how many lists of being the worst do we have to be on, how many companies do we need to see flee the state, before we do something about it?  I just became so incredibly frustrated by watching this happen and when Assemblyman Rocky Chavez announced his candidacy for U.S. Senate, I saw an opportunity to stop complaining and try to make a difference.  And that’s my goal: to make a difference.

Do you have a website so our readers can get a hold of your campaign?

I do.  It is www.grahamforassembly.com.

Thank you for taking a few minutes to chat – and good luck!