Pension Day of Reckoning: Taxpayers on the Hook For Outlandish Pension Promises

A public pension crisis of epic proportions is brewing in California. The state’s public pension disaster is the greatest financial challenge California has faced since the Great Depression. 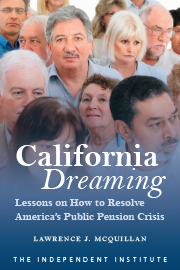 A new book by economist Lawrence McQuillen, exposes the true magnitude of the unfunded liability disaster, and focuses on the critical policy actions that drove California’s public pension debt to these heights. In California Dreaming: Lessons on How to Resolve America’s Public Pension Crisis, McQuillen, Senior Fellow at The Independent Institute, also examines the perverse political incentives of elected lawmakers and pension officials that reward them for not fixing the problem, rather letting it escalate. McQuillen studies the immorality of the crisis, the crucial reforms needed to fix the problem, and the long-term benefits of a permanent solution. I had the pleasure of interviewing Dr. McQuillen recently.

California has 86 defined-benefit public pension plans with about 4 million members, only 11 percent of the state’s population. Its state and local government employees receive defined-benefit pensions that guarantee specific monthly payments to retirees for life. The monthly checks are calculated based on final compensation, age at retirement, the number of years of service, and any cost-of-living adjustments.

Public employees in California are said to be addicted to the “CalPERS IV;” slaves to their pensions. “The old adage, ‘We pay good pensions to get and keep good people,’ no longer applies,” Dr. McQuillen explained. “They do encourage loyalty, but the bad ones stay around as well.”

“More people are becoming educated on the issue,” McQuillen said. And as such, the recent polls taken are showing that voters recognize reforms are necessary. In fact, a recent poll found 85 percent of likely voters see “pension costs a problem, or a big problem.” 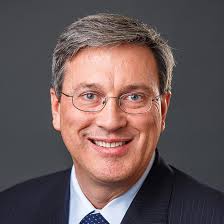 “This crisis is a politically created crisis that threatens to inflict harm on countless residents and retirees: a drastic shortfall between public pension promises, and the assets needed to make good on those promises,” said McQuillen.

In his book, McQuillen explains “public pension plans are supposed to be financed by contributions from government agencies and their employees, with those funds invested in profitable assets that enable the plans to pay the promised benefits for 20, 30, or 40 years after the employees retire. In California, however, pension officials and politicians of both political parties deliberately lowballed the contributions and increased the promised benefits to such an extent that the plans won’t be able to cover all of their pension liabilities. When the day of reckoning comes, taxpayers will be on the hook to make up the difference between pension promises and pension assets.”

What’s particularly frightening is independent experts estimate that state, county, and city governments will collectively be able to meet only 51 percent of their total pension obligations. McQuillen warns that everyone in California will see a significant cut in necessary government services while government struggles to make even minimum pension contributions. “The predicted $750 billion shortfall threatens to seriously disrupt public important government services such as schools, roads, parks, libraries, police, and fire departments; slash pension payouts to millions of public retirees; hurt the investment portfolios of bondholders; trash the credit ratings and borrowing capabilities of state and local governments; and impose huge tax burdens on current taxpayers and future generations,” said McQuillen.

How Did This Happen Right Under Voters’ Noses?

“The state’s unfunded pension liabilities have swelled to $750 Billion, due to a combination of overly generous pension benefits, unrealistic investment assumptions, politically motivated underfunding, and deliberate misinformation by pension officials,” McQuillen said. Politicians promised outlandish benefits, but didn’t make the necessary contributions. In doing so, they were buying votes for themselves now, as well as campaign contributors. And in 20, 30, 40 years, the bills will come due, when they are long gone.

Each year, the equivalent of 18 percent of the state budget is spent on the three largest public pension funds: the California Public Employees’ Retirement System (CalPERS), the California State Teachers’ Retirement System (Cal- STRS), and the University of California Retirement Plan (UCRP). “Although the financially troubled plans claim they can meet 79 percent of their pension promises, even this “admission” is incomplete; realistic estimates show they can barely cover one half,” McQuillen explained. ANs the $750 Billion should have been in the bank today, for past work done, and benefits earned. This amount isn’t addressing future pensions.

McQuillen also explained that the pension funds have been totally mismanaged. “It’s gross irresponsibility,” he said. “It comes down to pay me $4 Billion now, or pay me $40 billion 10 years from.” And not requiring public sector employees to contribute anything, or very little, has also contributed significantly to the pension debt. “On the flip side, they know there is unfunded liability, but the employer has to cover it, not them,” McQuillen said. “To make it healthy would require more contribution from public sector employees.”

Although California is heading toward a very steep fiscal cliff, a handful of reforms would permanently fix the public pension problem, McQuillen says:

(4) Abolish the California Rule by giving state and local governments the flexibility to switch to sustainable defined-contribution pensions for all public employees; and

Together, these reforms would cap the pension debt, pay all earned pension benefits, limit the intergenerational transfer of pension burdens, better protect public services, and provide pension benefits going forward that are affordable and comparable with those offered in the private sector.

“It is selfish and immoral to force future Californians to pay hundreds of billions of dollars for services they never agreed to, services they never received, or debt they never consented to,” McQuillen said. These methods and hard lessons learned in the Golden State can be applied anywhere in America.

Dr. McQuillen, received his PhD in economics from George Mason University, and has served as Chief Economist at the Illinois Policy Institute, Director of Economic Studies at Pacific Research Institute, and Hoover Institution.