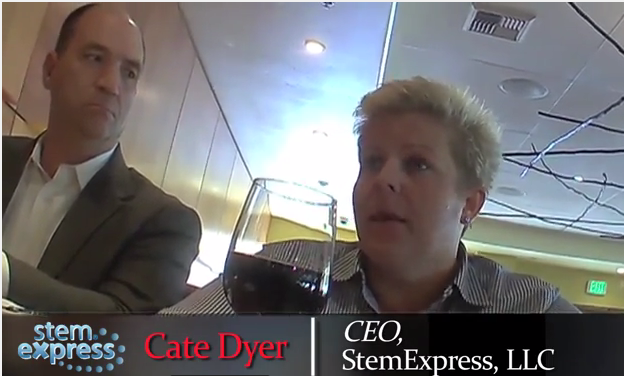 “The illegal profits made off of human tissue from abortion procedures represents a clear financial motive, and violates federal law:

“Planned Parenthood is subsidized with millions of taxpayers’ dollars each year, and should be held accountable and defunded for involving the California taxpayers in their black market human tissue schemes,” said Melendez in a recent press statement. Notably, StemExpress has an annual revenue of $4.5 million.

The hearing was not available via the Capitol’s standard closed-circuit television video system, and very few members of the media actually attended, despite the many news stories now appearing.

Coincidentally, the eighth Planned Parenthood video was also released Tuesday. In the video, Cate Dyer, the CEO of StemExpress, is shown chatting and laughing in a restaurant about the “rampant” infections at Planned Parenthood clinics throughout the country. In the latest video from the Center for Medical Progress, Dyer admits her company procures many intact fetuses from the Planned Parenthood abortion provider, and calls it a “volume producer.”

Later in the hearing after a lengthy hostile cross-examination by Sen. Richard Roth, D-Riverside, Melendez added, “What I don’t understand is why someone would oppose looking into the allegations that have been made and assuring the public.”

Roth challenged Melendez aggressively, with the passion rarely seen in the Legislature. “Can someone tell me what the violation is,” Roth asked condescendingly, only after offering his “kudos to those who donate tissue.”

StemExpress buys fetal organs and body parts from Planned Parenthood. In the video, Dyer says stem Express would like “another 50 livers a week.” “We’re working with almost like triple digit number clinics,” Dyer said, “and we still need more.”

“Planned Parenthood has volume, because they are a volume institution,” Dyer says.

Dyer said that payments to abortion clinics for fetal body parts should be financially beneficial to both parties.

The video also highlights how organizations like StemExpress promise “fiscal rewards” and “financial profits” for Planned Parenthood abortion clinics that sell dead baby parts to them.

Opposition to the Audit

“We have done everything that we are required to do to comply with state and federal laws and we will always do that,” Planned Parenthood Affiliates of California CEO Kathy Kneer said at the hearing. Kneer said the hullabaloo over Planned Parenthood funding was “designed to serve a political agenda,” to stop research and prevent women from accessing healthcare.

“Women’s health organizations like Planned Parenthood enjoy broad political support in Democrat-dominated Sacramento, and Democrats on the Joint Legislative Audit Committee questioned the need for an audit that Sen. Connie Leyva, D-Chino, described as an extension of a ‘witch hunt,’” the Sacramento Bee reported. (I didn’t see any reporters from the Bee at the hearing.)

“I think it hurts the organization more by having all these questions and angst out there than it does to provide transparency to the public,” said Sen. Jean Fuller, R-Bakersfield. Fuller then went throughout he JLAC criteria with Melendez, pointing out that the audit request was indeed legitimate.

“Audits considered by JLAC include performance audits, which examine whether state agencies and programs are efficiently and effectively operating as the Legislature intended; accomplishing their goals and objectives; complying with laws, regulations and policies; and, using state resources properly,” the JLAC reports. “Performance audits are on a variety of topics, which range from broad to very specific in scope. JLAC also considers financial and financial-related audits of government and publicly created entities.”

Planned Parenthood lawyers at the hearing denounced the videos as “heavily edited” and claimed the video-taping was illegal. StemExpress sued to keep the videos from seeing the light of day, but a California Superior Court judge tossed the injunction, saying that even if the video was obtained illegally, an injunction was not permissible. And, StemExpress will be held liable for CMP’s legal costs under California’s anti-SLAPP statute.

“Planned Parenthood is subsidized with millions of taxpayers’ dollars each year and should be held accountable and defunded for involving California taxpayers in their black market human tissue schemes,” Melendez said.

“I am appalled that my democratic colleagues would allow partisan politics to triumph in the face of such damning allegations,” Melendez said. “The people of California deserve elected officials who demand accountability not political puppets.”